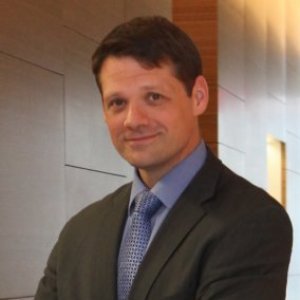 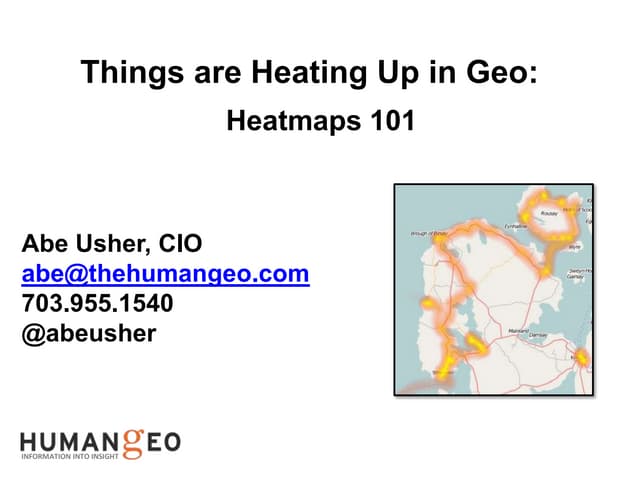 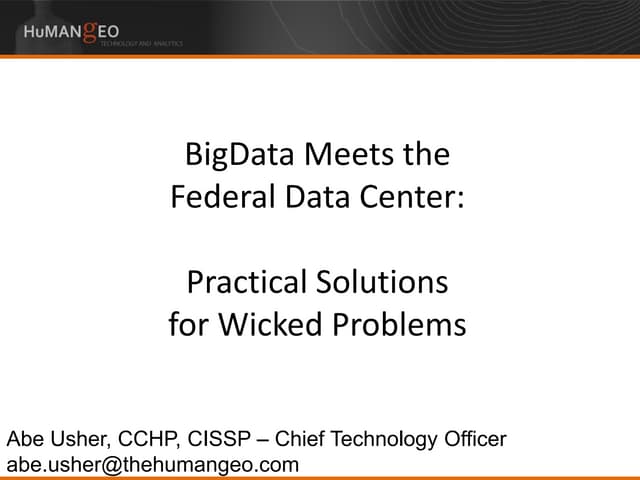 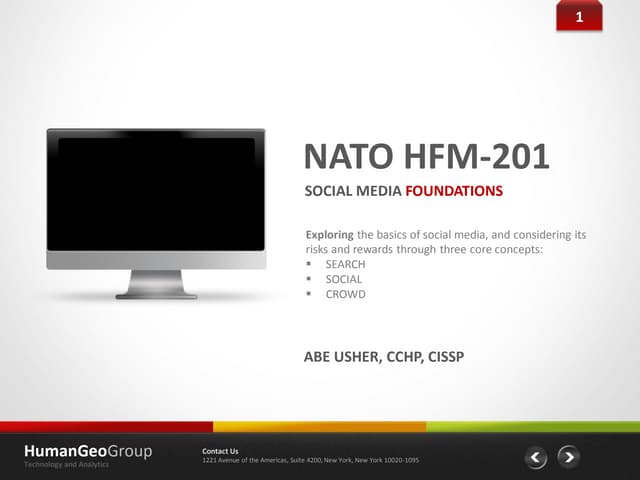 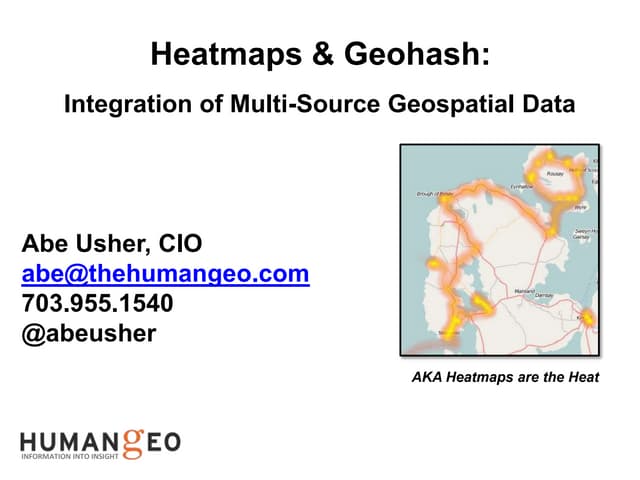 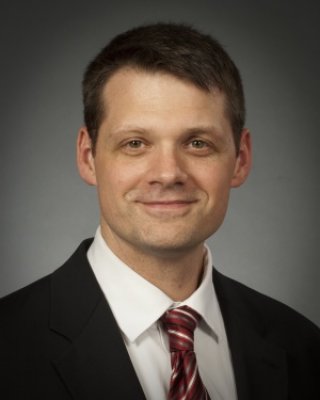 Abe Usher is the Chief Technology Officer of the HumanGeo Group, a Big Data analysis company.

Previously, Usher was an engineer at Google where he worked on the integration of search and geospatial technologies such as Google Maps.

He has served as a keynote speaker on discussions related to Big Data analysis, location intelligence, and cyber security.

Before working at HumanGeo or Google, Usher served as a cryptologist in the US Air Force and as an Infantry leader in the US Army. A graduate of the US Military Academy at West Point, Usher lives in Virginia near Washington, DC.

CISSP certification is a globally recognized standard of achievement that confirms an individual's knowledge in the field of information security. CISSPs are information assurance professionals who define the architecture, design, management and/or controls that assure the security of business environments. It was the first certification in the field of information security to meet the stringent requirements of ISO/IEC Standard 17024.

Abe represents the best of Google Enterprise as he is committed to solving tough technical challenges and effectively evangelizing the art of the possible. Abe's strengths that I have experienced lie in a deep and wide-ranging body of technical knowledge and expertise across not only Google Enterprise products but in particular his talent operating within the dark nooks and crannies of INFOSEC within tough, secure government settings as well a deep expertise in social networking and its application to operational support and analysis. He is one of the few true technical "rock stars" I have been honored to work with and look forward to our tackling some touch, meaningful problems ahead -- I do not hesitate to give Abe a big thumbs up!

HeatMaps are the Heat

We all know there is more data than ever. But there's not just more of it, it is much less predictable in format, and it's also hitting data centers at great speed as bandwidth increases and access becomes more pervasive. This talk presented challenges, trends, directions, architectures, and solutions. http://www.slideshare.net/abeusher/bigdata-meets-the-federal-data-center

HeatMaps are the Heat

This presentation discussed the rapidly emerging landscape of technologies and data related to location intelligence. As a capstone, it presented a method of using kernel density (heatmap) technology to understand trends that can be visualized in large scale geospatial data. http://www.slideshare.net/abeusher/heatmaps-are-the-heat

I presented an overview of applied technology innovation to a Seminar at Harvard Business School. http://www.hbs.edu/networkedbusiness/conferences-and-seminars/

At the Massachusetts Institute of Technology, I presented an overview of the changing landscape of location intelligence as it is related to Big Data technologies. More than two-dozen Fortune 500 companies were present for my briefing, as part of an event sponsored by the Marketing Science Institute. http://www.msi.org/publications/publication.cfm?pub=2071

Ex-Google engineer Abe Usher presents a talk about Big Data technology and methods applicable to social science. Participants will learn techniques that are used by Google engineers to collect, clean, analyze, and visualize Big Data. Additionally Mr. Usher will provide URLs to sample data, open source applications, and code to those interested in applying these Big Data methods themselves. Some familiarity with basic statistics will be useful in understanding the talk, but no knowledge of coding or software development is required. Come learn about what Big Data really means at this informative and humorous talk. http://www.slideshare.net/abeusher/big-data-and-the-social-sciences

Social media provides a variety of context data to help understand business environments better. The infusion of social media’s contextual data with 21st century location-based smart systems is generating geospatial context, which is helping forward-thinking companies to deliver tailor-made information to users based on location. Highlighting the importance of geo-location data is HumanGeo, a technology and analytics innovator in geospatial context with robust capabilities in hyper-local advertising, threat monitoring, and activity modeling.

When launching a service-based technology startup, it helps to be able to walk into a meeting and own the room. Al DiLeonardo and Abe Usher, the co-founders of HumanGeo, rarely have to worry about that. The two met in 2007 when DiLeonardo, working for the U.S. Army Special Ops Command (SOCOM) visited Google’s D.C. headquarters to try to recruit technology talent for a new data project. Sitting in their new office conference room on the top floor of a Ballston startup, DiLeonardo shrugs and admits he might be the only person to have walked into a Google office hoping to lure people away. Most of the employees laughed it off, but Usher — a graduate of West Point and former NSA cryptologist — chased DiLeonardo down in the parking lot and accepted the job.

As Web 2.0 hype has worn off and the participatory use of the Internet becomes a societal norm, we are witnessing an unprecedented explosion in the creation and analysis of geospatial data. Just as major governments are reducing their investments in location intelligence (due to budget reductions), individuals and non-government organizations (NGOs) are fueling a bonfire of innovation in the world of GIS data. This timely innovation is driven in response to several recent trends: 1. The explosion of social networks for sharing information 2. The proliferation of smartphones and GPS technology 3. Web-based planning and operations for humanitarian relief and crisis response. There are at least three important socio-technological advances that are affecting human geography: how users are co-creating content through the participatory Internet; how new methods are available for exploring and analyzing data; and how emergency responders are finding new ways to use old technologies