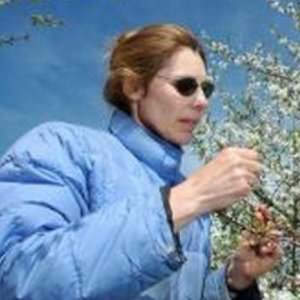 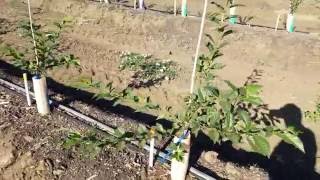 Amy Iezzoni is the only tart cherry breeder in the U.S., and she's passionate about her mission. For more than 30 years, she's been researching plant breeding and genetics as well as traveling the world to collect and study many types of cherry trees.

2010 Sweet cherry (Prunus avium L.) skin and fruit colors vary widely due to differences in red and yellow pigment profiles. The two major market classes of sweet cherry represent the two color extremes, i.e., yellow skin with red blush and yellow flesh and dark mahogany skin with mahogany flesh. Yet, within these extremes, there is a continuum of skin and flesh color types. The genetic control of skin and flesh color in sweet cherry was investigated using a quantitative trait locus (QTL) approach with progeny derived from a cross between cherry parents representing the two color extremes. Skin and flesh colors were measured using a qualitative color-card rating over three consecutive years and also evaluated quantitatively for darkness/lightness (L*), red/green (a*), and yellow/blue (b*). Segregations for the color measurements (card, L*, a*, and b*) did not fit normal distributions; instead, the distributions were skewed towards the color of the dark-fruited parent. A major QTL for skin and flesh color was identified on linkage group (LG) 3. Two QTLs for skin and flesh color were also identified on LG 6 and LG 8, respectively, indicating segregation for minor genes. The significance and magnitude of the QTL identified on LG 3 suggests the presence of a major regulatory gene within this QTL interval. A candidate gene PavMYB10, homologous to apple MdMYB10 and Arabidopsis AtPAP1, is within the interval of the major QTL on LG 3, suggesting that PavMYB10 could be the major determinant of fruit skin and flesh coloration in sweet cherry.

2010 Maximizing fruit size is critical for profitable sweet cherry (Prunus avium L.) production. Yet, despite its importance, little is known about the genetic control of fruit size. The objective of this study was to identify quantitative trait loci (QTLs) for fruit size and two essential components of fruit size, mesocarp cell number and size. This study utilized a double pseudo-testcross population derived from reciprocal crosses between a sweet cherry cultivar with ~8 g fruit, “Emperor Francis” (EF), and a wild forest sweet cherry selection with ~2 g fruit, “New York 54” (NY). A total of 190 F1 progeny previously utilized for the construction of the linkage maps were evaluated in 2006 and 2007 for fruit weight, length, and diameter; mesocarp cell number and length; and pit length and diameter. In 2008, a subset of this population was again evaluated for fruit weight. Correlation analysis revealed that the three fruit size traits were highly correlated with each other, and mesocarp cell number, not cell length, was correlated with fruit size. Three QTLs were identified for each fruit size trait, and one QTL was identified for mesocarp cell number. Fruit size QTLs were found on linkage group 2 on the EF map (EF 2) and linkage groups 2 and 6 on the NY map (NY 2 and NY 6). On EF 2, the cell number QTL clustered with the fruit size QTL, suggesting that the underlying basis of the fruit size increase associated with this QTL was an increase in mesocarp cell number. On NY 6, pit length and diameter QTLs clustered with those for fruit size, suggesting that the underlying morphological basis of this fruit size QTL is the difference in pit size.

2009 Use of dwarfing rootstocks has dramatically increased the profitability of fruit production by reducing production costs, reduced chemical use and higher density plantings. Despite the importance of rootstock-induced dwarfing, the cause of this phenomenon is not known. Using two commercially available graft combinations consisting of a sweet cherry scion, ‘Bing’, on a dwarfing rootstock (Gi5) or a semi-vigorous rootstock (Gi6), we discovered that the difference in grafted tree height was due to a significantly earlier cessation of terminal meristem growth of the scion on Gi5 compared to Gi6 rootstock, rather than shorter metamer length. We then carried out cDNA-AFLP analysis to investigate differential gene expression between the two graft combinations. Transcript-derived fragments (TDFs) identified as differentially expressed were cloned and printed on microarrays for further confirmation of the differential expression. A total of 99 TDFs were identified as differentially expressed between the ‘Bing’/Gi5 and ‘Bing’/Gi6 samples, including genes involved in transcription regulation, brassinosteroid signaling, flavonoid metabolism and cell wall biosynthesis or modification. Rootstock vigor has a significant effect on gene expression at the scion and the graft union. Timing of the differential gene expression in the dwarf trees coincides with the earlier cessation of terminal shoot growth, suggesting that these differentially expressed genes may be involved in the dwarfing phenomenon.