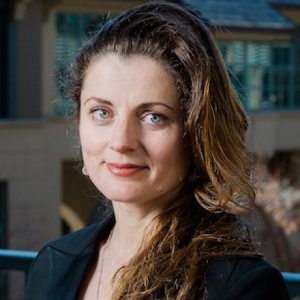 
Expert on new forms of organizing

Andreea Gorbatâi is an Assistant Professor in Management of Organizations at Berkeley Haas. She currently teaches the Leading People course in the evening MBA program. Her research focuses on social mechanisms related to knowledge production and information sharing and on the role of language and emotions in markets. Organizational theory research has examined the various social mechanisms and structures that play a role in knowledge diffusion and the characteristics of this knowledge. However, the perspective of information as a public good and the unintended consequences of different modes of free knowledge production and sharing have been underexplored in this field. In response to this issue, Gorbatai’s work seeks to answer questions such as: Under what conditions do collective producers make useful goods? How do social networks of collective production affect social norm infringement and enforcement? Under what conditions does conflict improve the quality of collective goods? When does entrepreneurship emerge from free knowledge production settings, and what strategies do entrepreneurs adopt in relation to the community they emerged from? How does media make sense of information about new organizational forms, and under what conditions does it contribute to their legitimization?

Gorbatâi received her PhD in organizational behavior from the Harvard Business School and was a finalist of the 2011 INFORMS / Organization Science Dissertation Proposal Competition. She earned her a master’s degree in sociology from Harvard University and an undergraduate degree in economics and sociology from Dartmouth College. Before her academic career, she worked in economic consulting for National Economic Research Associates (NERA), a Marsh & McLennan company, and in strategy and operations consulting for Deloitte Consulting. Her work spanned a wide range of projects—from estimations of intellectual property damage in biotech and competitive analyses for antitrust trials in the software industry to IT merger and integration planning, consumer packaged goods process redesign, and performance management system design for the publishing industry. She has extensive international experience and is fluent in five languages.

Research Program on the Economics of Knowledge Contribution grant

Research Assistantship in the Humanities, Committee on Research, UC Berkeley

"If any of his investor friends would want to contribute, they would not contribute on the GoFundMe page," said Andreea Gorbatai, an assistant professor at Berkeley's Haas School of Business. "They would pitch in for equity, so attention seems like the only thing he's looking to get out of this."

Here's Why Crowdfunding Is a Good Bet For Female Founders

Women Are Better Crowdfunders Than Men. Here's Why.

Women raise more money with crowdfunding than men do, all other things being equal, according to a study of nearly 10,000 Indiegogo campaigns. That’s because women tend to use more positive and inclusive language and that builds community with potential investors, says UC Berkeley Haas School of Business Assistant Professor Andreea Gorbatai.

Raising money is hard work, no matter who you are. However, it’s no secret that women entrepreneurs have an even harder time raising capital from angels, venture capitalists and bankers than their male counterparts.

When a young college student drummed up a creatively feline approach to headphones back in 2014, she had no idea she was about to unleash a Cat Ear Headphone revolution. Wenqing Yan came to Indiegogo looking to raise $250,000 to bring her quirky headphones to life.

Management and the Future of Open Collaboration

Linguistic Advantage: Gender and the Language of Crowdfunding

Enchanting Fields: Collective Events and Emotion as Value-Amplifiers during the Emergence and Institutionalization of the Maker Movement

The Paradox of Novice Contributions in Collective Production: Evidence from Wikipedia