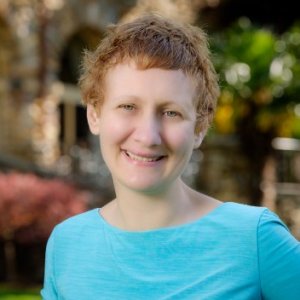 
She provides education, advocacy and support to the LGBTQ community and puts into perspective gender identity and sexual orientation issues.

Mazaris is the founding director of the LGBTQ Center at Wake Forest University, where she also teaches in the Women’s, Gender, and Sexuality Studies program. She provides education, advocacy, and support to the campus community around issues of gender identity and sexual orientation and serves on Wake Forest’s diversity and inclusion leadership team. Since the passage of North Carolina House Bill 2 (HB2), she has provided expert commentary for a wide range of national and regional media outlets including Fox News, Charlotte Observer, WFDD, The Advocate and the Winston-Salem Journal.

Mazaris’ teaching and research focus on LGBTQ history, queer theory, public history, and gender studies. While at Brown, she held a Jacob Javits Fellowship from the U.S. Department of Education and served as the first Coordinator of the LGBTQ Resource Center. Before coming to Wake Forest, Mazaris served as a Presidential Management Fellow at the Internal Revenue Service and the National Park Service, where she developed agency-wide inclusion and diversity initiatives and prepared policy recommendations. At the IRS, she oversaw a special emphasis program for LGBTQ issues – a first for the agency.

"For the past year, North Carolina has worn the Public Facilities Privacy & Security Act—more commonly known as House Bill 2 or HB2—like a national badge of shame. This so-called bathroom bill, passed with no advance notice by special legislative session in March 2016 and signed into law by former Republican Gov. Pat McCrory, specifically targeted the state’s transgender population, making it a crime for people to use restrooms in public facilities that don’t match the sex marked on their birth certificate," wrote Mazaris.

The Charlotte Observer (picked up nationally by McClatchy outlets)

Angela Mazaris, director of Wake Forest University’s LGBTQ Center, accused McCrory of election year politics in defying the federal government. “This is not a safety issue, it’s a civil rights issue,” Mazaris said in a statement released by the university.

“In addition to putting millions of federal education funding at risk, we’ve already seen a $500 million economic impact to our state – everything from a cancelled expansion of PayPal facilities in Charlotte to the cancellation of Bruce Springsteen.”

“Research shows zero evidence of a rise in crime or sexual assault as a result of passing non-discrimination ordinances that protect transgender people. Instead, lawmakers preyed upon fears and misconceptions to pass a sweeping discriminatory measure. States across the nation need to mobilize the networks of activists, politicians and supporters who were so critical in securing marriage equality and now work toward the goal that perhaps we should have been pursuing from the get-go: full protections under the law for all people, regardless of sexual orientation or gender identity.”

Legal expert: North Carolina's law is the most anti-gay in the country

On Thursday, 200 students, faculty and staff members, and others gathered at Wait Chapel at Wake Forest University to protest the new law. Angela Mazaris, the founding director of Wake Forest University’s LGBTQ Center, helped organize the protest. She said the new law hurts gays, lesbians and transgender people, and also jeopardizes the ability of businesses to recruit.

People around the world are celebrating the life of David Bowie after the superstar died on Sunday at age 69. He touched nearly every corner of popular culture, and according to one expert, he had a special impact on many in the LGBTQ community. WFDD’s Sean Bueter sat down with Wake Forest LGBTQ Center director Angela Mazaris to talk about Bowie’s legacy beyond his art.