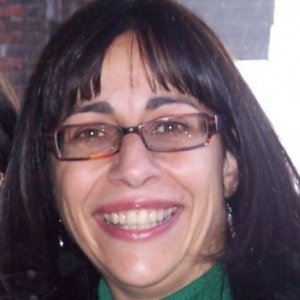 
Anuradha Dugal is responsible for all national strategies related to violence against women and girls and teen violence prevention.

Anu has been Director of Violence Prevention Programs at Canadian Women’s Foundation since 2008 and previous to that was a Board Member (2002 – 2007) and Chair of the Violence Prevention Committee. She is currently responsible for national strategies related to violence against women and girls and teen violence prevention, including sex trafficking. This includes grant making, knowledge mobilization, program enhancement, convening and coalition building. Whenever possible, Anu spreads the word of the great work that the Foundation is doing through media opportunities such as op-eds, blogs, interviews and social media.

She has also worked in fundraising at the Faculty of Medicine at McGill University, and prior to that was Executive Director of the Quebec Chapter of Leave Out Violence from 2001 to 2005. Her first major achievement after settling in Canada in 1999 was to join the team at the Fédération de femmes du Québec organizing the international coalition of women’s groups that made up the World March of Women. Before coming to Canada she was a high-school language teacher, specializing in girls’ education and working in the UK and Japan.

Anu is very involved in social issues (violence against women and girls, teen violence, gender equality, urban agriculture and sustainable development) and she sits on the advisory group for a SSHRC Partnership Grant - Canadian Domestic Homicide Prevention Initiative for Vulnerable Populations, Ontario Round Table on Sexual Violence & Harassment and YWCA Canada’s Project Shift to end cyber violence project. She is also on the Board of Directors of Royal Lepage Shelter Foundation. Most recently she was appointed by Minister Hajdu to the Advisory Committee for the federal strategy on gender-based violence. She enjoys gardening, knitting, walking and visiting Canada’s beautiful wilderness. She is supported unstintingly by husband, Michael Hind, and her three boys, who she is raising to be feminists.

Anuradha Dugal, director of violence prevention at the Canadian women’s foundation said when a natural disaster occurs, those who rely on shelters need to be found a safe space to live in the wake of a disaster. “Shelter workers need to confirm that she has a safe place to go and either accompany her or support her in someway,” she said. Dugal said in the case of Fort McMurray, those who were in the shelters there at the time of the evacuation were set up in shelters in Medicine Hat, Lac LaBiche, or with family or friends who were able to keep them away from their abuser. Situations like the evacuation and wildfires in Fort McMurray and now the return can be very triggering for victims of domestic abuse, said Dugal...

What Will It Take To End Sexual Assault?

What will it take to end sex assault? Sexual assault is one of the violent crimes in Canada where we have seen few improvements in the last few years. In a 2014 Statistics Canada report on violent victimization, we can see that the numbers are going down for all violent crimes -- murder, battery, physical assault, even domestic violence. But the numbers for sexual assault have stayed the same for over a decade...

Two-thirds of Canadians believe most sex-assault claims are true

After the acquittal, a charitable organization for women and girls commissioned a poll to gauge whether the case tainted the public’s attitude toward sexual assault allegations, said Anuradha Dugal, director of violence prevention at the Canadian Women’s Foundation. The poll showed 67 per cent of Canadians believe the majority of sexual assault claims are true. According to the survey, only one per cent of respondents believed the majority of allegations are false. Seven per cent believe they’re exaggerated, while 24 per cent didn’t know what to believe. Dugal said the results suggest the case did not have a “terrifically negative influence — people are still believing women,” she said...

Since Valentine's Day is just round the corner, some of you probably have big plans. Perhaps it's a special date night or a couple's massage. Maybe you've already booked the babysitter, scheduled your mani-pedi or bought new lingerie...