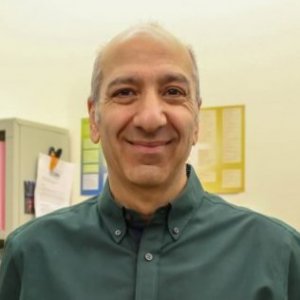 Board of Trustees Distinguished Professor | University of Connecticut

Professor Javidi's work is dedicated to integrating optics, photonics, and computational algorithms and systems for advancing the science and engineering of imaging from nano to macro scales. The goal of his lab is to become the international leader in real-time optical imaging approaches and technologies by advancing the fundamental science and engineering in optics and photonics for imaging and to transition research outcomes to applications in healthcare, defense, security, manufacturing, mobile communications, and commerce.

2010, George Washington University’s highest honor for its alumni in all disciplines.

2008, The International Society for Optics and Photonics (SPIE).

Discover - Science for the Curious  online

At one time, coverslips, mirrors and lenses ruled the world of microscopy. Today, atoms, ions and laser beams are among the key components that create crisp images of the miniature world of cells, molecules and nanostructures. As the following images show, microscopy is now both art and science, a blend of data and design. No small feat.

Photonics steps in to solve security issues with cryptography

Security for FSO manipulates certain physical parameters of the optical waves that convey the information. These waves offer a host of hiding places for sensitive data: “FSO possesses many degrees of freedom such as amplitude, phase, polarisation, spectral content and multiplexing, which can be combined in different ways to make the information encoding more secure,” says Professor Bahram Javidi from the University of Connecticut. “In a sense, you can create multi-dimensional keys which are much harder to attack.”

Using advanced 3-D optical imaging and extremely low light photon counting encryption, Board of Trustees Distinguished Professor Bahram Javidi and his research team have taken the ordinary QR code and transformed it into a high-end cybersecurity application that can be used to protect the integrity of computer microchips. The findings were published in IEEE Photonics Journal.

This paper presents a newly developed, laserbased, noncontact and remote temperature sensor suitable for high as well as low temperature measurements, which can be adapted to a commercial tensile testing machine equipped with an electrical furnace to monitor temperature. It can also be a miniaturized sensor for remote measurement of body temperature for biomedical diagnostics (e.g. as a sensor integrated into an endoscope to measure internal temperature during surgical procedure). The basic principle of the sensor is based on determining the changes occurring to a secondary speckle pattern generated by the scattered laser beam from a rough surface. In the present case a rough metal surface is used. As the surface of the metal plate changes due to cantilever action when exposed to heat, the resulting speckle pattern also changes. This change in the speckle pattern is computed by comparing it to a reference speckle pattern recorded at known temperature and can so be related to the temperature change. From the value of correlation coefficient we were able to measure the temperature. Furthermore, the paper presents the description of the signal processing algorithm and the optical arrangement. Based on the experimental data, it can be shown that this sensor can be successfully used for the remote extraction of temperature.

The original aim of the integral-imaging concept, reported by Gabriel Lippmann more than a century ago, is the capture of images of 3D scenes for their projection onto an autostereoscopic display. In this paper we report a new algorithm for the efficient generation of microimages for their direct projection onto an integral-imaging monitor. Like our previous algorithm, the smart pseudoscopic-to-orthoscopic conversion (SPOC) algorithm, this algorithm produces microimages ready to produce 3D display with full parallax. However, this new algorithm is much simpler than the previous one, produces microimages free of black pixels, and permits fixing at will, between certain limits, the reference plane and the field of view of the displayed 3D scene. Proofs of concept are illustrated with 3D capture and 3D display experiments.

An optical see-through head-mounted display (OST-HMD), which enables optical superposition of digital information onto the direct view of the physical world and maintains see-through vision to the real world, is a vital component in an augmented reality (AR) system. A key limitation of the state-of-the-art OST-HMD technology is the well-known accommodation-convergence mismatch problem caused by the fact that the image source in most of the existing AR displays is a 2D flat surface located at a fixed distance from the eye. In this paper, we present an innovative approach to OST-HMD designs by combining the recent advancement of freeform optical technology and microscopic integral imaging (micro-InI) method. A micro-InI unit creates a 3D image source for HMD viewing optics, instead of a typical 2D display surface, by reconstructing a miniature 3D scene from a large number of perspective images of the scene. By taking advantage of the emerging freeform optical technology, our approach will result in compact, lightweight, goggle-style AR display that is potentially less vulnerable to the accommodation-convergence discrepancy problem and visual fatigue. A proof-of-concept prototype system is demonstrated, which offers a goggle-like compact form factor, non-obstructive see-through field of view, and true 3D virtual display.

Conventional photographic cameras do not have the ability to record the angular information carried by the rays of light passing through their objectives.

Photoelastic Analysis of Partially Occluded Objects With an Integral-Imaging Polariscope