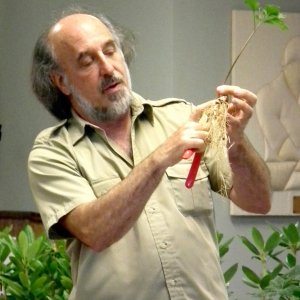 Barry Glick has been involved in the plant world since 1954, when at the young, impressionable age of 5, he witnessed Don Herbert (Mr. Wizard on TV) put a cutting of a plant in a glass of water only to sprout roots a few shows later. Barry replicated the experiment with his one of his mother's prized Coleus plants, and as he watched the roots grow, knew that he was hooked for life.

Growing up in Philadelphia in the 60s, a Mecca of horticulture, Barry would hitchhike to Longwood Gardens before he was old enough to drive. In 1972 he realized there was just not enough room for him and his plants in the big city environment, so he bought 60 acres of a mountaintop in Greenbrier County West Virginia where he gave birth to Sunshine Farm & Gardens, started his plant collection, and has remained there since.

The main focus of plant breeding at Sunshine Farm & Gardens is within the genus Helleborus.

Woodland Wonders From The Wilds

WOODLAND WONDERS FROM THE WILD - An enlightening, entertaining and educational look at some of the plants that we overlook on our woodland hikes. Some of the most interesting and unusual wildflowers are growing in our own backyards under our noses. Join native plant expert Barry Glick for a fascinating glimpse into the world of wildflowers.