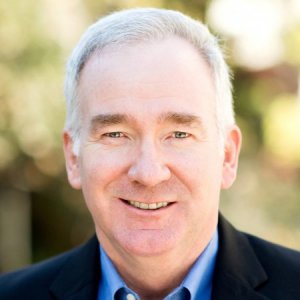 Bill Pearce is Assistant Dean and Chief Marketing Officer (CMO) for the Haas School of Business, and is a continuing professional faculty member in the Marketing Group and the Institute for Business Innovation.

Pearce is a senior executive with an outstanding track record of profitable business-building based on exceptional strategic, analytic, and financial disciplines. He has broad marketing and general management experience in both the consumer products and consumer service sectors. Bill has functional expertise in both sales and marketing, and is recognized as an inspirational leader who builds strong teams of direct reports and cross functional teamwork.

Pearce ascended the marketing ranks at consumer goods companies including Procter & Gamble, Taco Bell and Del Monte, the latter two as Chief Marketing Officer. He built general management skills as P&L owner at every stop along the way in his marketing career with emphasis on driving Topline and bottom line growth.

Pearce earned his undergraduate degree from Syracuse and then spent six years in sales at Miller Brewing and Coca-Cola USA. Desiring a career in general management, Bill earned his MBA from Cornell University. He began his marketing/GM career with Procter & Gamble, where he spent 11 years. Desiring additional responsibility, he became VP Marketing of the Food Division at Campbell Soup Company. He first advanced to the C-suite with Taco Bell as CMO. There, Bill led the business to consistent same-store sales growth and steered the brand through an E. coli scare with no long-term impact to the brand.

As Chief Marketing Officer for consumer brand marketer Del Monte Foods, Pearce led a turnaround of that company’s complex portfolio of over 30+ brands by upgrading analytic, strategic, and planning practices to drive improvements in portfolio management, marketing productivity, and new product development. The result was a tripling of the market capitalization value and the subsequent purchase of Del Monte by a Private Equity consortium led by KKR.

Most recently, Pearce became Lead Board Director at Ooma (NYSE) and Chairman of VC-backed RichRelevance.

Locally-owned bookstores have seen a resurgence after years of decline, and that might just be because they offer something more than just a product. "It if was just acquiring a book, a retail economic argument would be you’d get it cheaper on Amazon," said Asst. Dean Bill Pearce, a member of the Professional Faculty and Chief Marketing Officer at Berkeley Haas.

'This isn't Webvan': Giants and upstarts are racing to seize grocery delivery's moment

New delivery markets are opening up as a result of the pandemic but startups should approach the boom with caution. Not every company will make it, and whether they do will depend on factors such as cost of delivery and the customer experience, said Assistant Dean and Chief Marketing Officer Bill Pearce.

Uber is rolling out rooftop billboards for cars in Atlanta, Dallas, and Phoenix. Considering that the company lost $8.5 billion last year, a business that provides a near-term return on investment has an obvious appeal, says Bill Pearce, assistant dean and Chief Marketing Officer at Berkeley Haas.

Behind the blitz: Falun Gong practitioners spend millions on Shen Yun ads. How do they do it?

A Shen Yun-linked San Francisco nonprofit group reported $3.9 million in ticket sales while spending $2.2 million on advertising and promotion. That's an unusual amount spend on ads, says Asst. Dean and Chief Marketing Officer Bill Pearce, a member of the marketing faculty. “Typically, if you’re higher than 10%, it’s really high,” he said, noting that the industry benchmark for ad spending is 7.5% of projected revenue. “It’s truly from a marketing standpoint what we call a ‘heavy-up.’”

What’s in a Domain Name?

Bill Pearce, chief marketing officer and assistant dean for marketing and communications at the University of California, Berkeley’s Haas School of Business, said the school had purchased some domain names but noted, “We have to draw the line somewhere.”

When holiday shopping goes digital, what gets left behind?

The 2019 holiday shopping season has kicked off with record-breaking online sales, but a continued decline in foot traffic to local retailers. Can brick-and-mortar stores survive in an increasingly online world? Asst. Dean & CMO Bill Pearce joins for a discussion of retail trends.

An anti-drug campaign in South Dakota has caused raised eyebrows across the country. Asst. Dean Bill Pearce, a professional faculty member in the Marketing Group, said any real message was lost by an ad campaign that embodies "poor strategy and poor execution." "I can’t imagine this is what they intended to do; any good marketer would look at this and say: 'Yeah, let’s not do that,'" Pearce said. "I’m sure South Dakota residents don’t like being laughed at. That’s what’s happening right now."

Why do companies insist on handing out more ugly tote bags? “Most companies don’t think through what would be attractive and useful to their customers,” said Assistant Dean and Chief Marketing Officer Bill Pearce. “Swag’s got to tell a story about the company and the service it provides to be effective."

Clif Bar and Kind Are Fighting. Here's Why.

Energy-bar giant Clif bar and snack-bar maker Kind are fighting over whose products have the best ingredients. The squabble came to a head on Monday, when Kind released a TV ad criticizing Clif for the high sugar content of its classic chocolate chip energy bar. Ultimately though, as Bill Pearce, a professor of brand marketing at the University of California at Berkely, points out, a campaign like this isn’t actually about what’s better for the customer. “It’s a disservice to the consumer,” he says. “If you want to be seen as a valuable supplier, you have to grow the category rather than trying to steal market share from another company. This is the antithesis of that. This is just a petty squabble.”