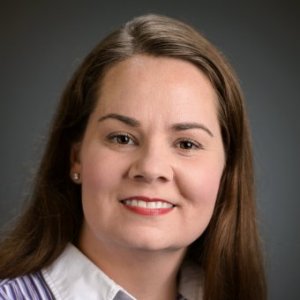 
Billie Murray, PhD, explores the timely territory of community responses to hate speech, and on issues of rhetoric and social justice. 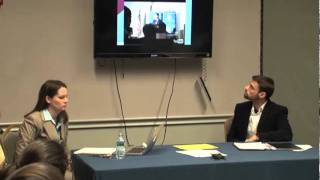 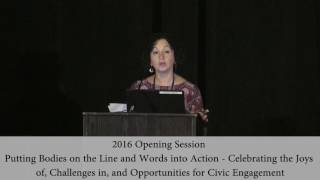 A rhetorical activist scholar, Dr. Murray’s research explores the timely territory of community responses to hate speech. In conducting her research she observes, and can speak about, protest movements at street level. Dr. Murray can also address issues and events related to rhetoric and social justice, rhetoric and democracy and civic engagement.

Ethos Award for Character and Excellence in Communication (professional)

Millions of people around the world came together to protest and to bring awareness to climate change in the days leading up to the U.N.'s climate summit. … Villanova University professor Billie Murray joined "CBSN AM" to discuss.

When Neo-Nazis and Antifascists Clash, This Professor Wants to Be in the Thick of It

For Billie Murray, an associate professor of communication at Villanova University, getting close to her research subjects occasionally requires choking through tear gas or dodging flash grenades. As a scholar who studies community responses to hate speech, she gravitates toward incendiary confrontations. If there’s a battle brewing between neo-Nazis and masked antifascists, Murray tries to be in the thick of it, notebook in hand.

What impact can hate speech have on midterm elections?

With the midterm election set for Tuesday, a communications expert is asking voters to pay attention to the rhetoric of politicians. Billie Murray is an associate professor of communications at Villanova University. She says hate speech often uses coded words to send a message. Murray points to the president saying he was a "nationalist," as an example, because of its historic meaning.

The Reality of Meeting Hate Speech with “More Speech”

By Billie Murray, associate professor of Communication and Faculty in Residence in the Center for Peace and Justice Education at Villanova University: On the one-year anniversary of the deadly white supremacist rally in Charlottesville, Virginia, it seemed important to reflect on how we, as concerned citizens, can and have responded to the continued existence of hate in our communities. Over the past year, I have continued my now four-year long research project on this issue, attending protests at white supremacist rallies in Stone Mountain and Newnan, Georgia; Columbia, South Carolina and on August 12th in Washington, DC.

What to Do When the Fascists Come to Town

Billie Murray is a Villanova professor who's been focusing on how people should respond to Nazis for her entire career. The academic, who studies community responses to hate speech, says that the events in Charlottesville throw almost all conventional wisdom out the window. She doesn't buy that "more speech" argument.

Summer 2018 Awarded to support faculty pursuing research that contributes to issues of diversity and inclusion.

Waterhouse Family Institute for the Study of Communication and Society

2018 As mentioned in the preface, the start of the 102nd NCA Annual Convention coincided with the 2016 presidential election, about which many of our members were feeling despair, fear, and utter disbelief. I am writing this introduction in the early months following the inauguration of our new president, and more importantly, after attending inauguration protests and participating in one of the largest protest events in our history, the Women’s March on Washington (with solidarity marches held in every U.S. state and on every continent).[1] As these marches and protests indicate, and as embodied in this Social Justice Exchange publication, people are no longer paralyzed by despair or disbelief—they are getting to work.

Who Are We, Where Are We, and What Can We Do: The ‘Place’ of Localized Activism in the Global Extraordinary Rendition and Torture Program

2017 In this essay, I examine a case of localized activism in the context of the globalized extraordinary rendition and torture program. I argue that the activists’ carefully crafted rhetoric highlighting “place” allowed them to construct a collective identity for local citizens in North Carolina—one that was imbued with agency because of their situatedness in a particular place in a global network. By determining who we are, as connected to where we are, we can determine what we can do.

The Sphere, the Screen and the Square: ‘Locating’ Occupy in the Public Sphere

2016 In this essay, I argue that considerations of public space are vital to scholars' theorizing of the public sphere. Discursive interactions, media spectacles, and social media use are all integral to social movement success, but an understanding of their interdependence with physical spaces is also essential to the maintenance of democratic participation. “Locating” Occupy in the public sphere through an exploration of its simultaneous occupation of public squares and public screens reveals the importance of public spaces in maintaining public spheres.

2016 In the following essay, I argue that the U.S. Supreme Court decision in Snyder v. Phelps, together with the symbolic and spatial contexts surrounding funeral picketing, enables and constrains particular modes of community response to hate speech. Exploring community responses to Westboro Baptist Church’s hate speech reveals a mode of resistance based in corporeal presence, as counter-demonstrators’ bodies are used to shield mourners from messages of hate. The corporeal nature of these responses reasserts the boundaries between the public and private, and the sacred and profane, in ways that judicial responses do not.

2014 Communication instructors are quite adept at helping students to grasp the intellectual significance and professional utility of the communication discipline, but they are just beginning to invest in the potential of communication studies as an engaged, democratic, and activist pedagogy, and to cultivate in students an appreciation for and desire to participate in such endeavors that are critical to public life.

For What Noble Cause: Cindy Sheehan and the Politics of Grief in Public Spheres of Argument

2012 This essay provides an analysis of the rhetoric surrounding Cindy Sheehan during the height of her popularity in August and September 2005. This analysis reveals that grief can function as a form of public argument, thus contributing to a more nuanced understanding of what G. Thomas Goodnight has termed the public and personal spheres of argument.