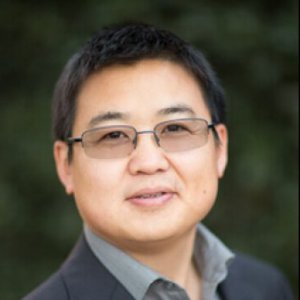 
Dr. Chen is the founding member of DahShu, a non-profit organization to promote research and education in data sciences. 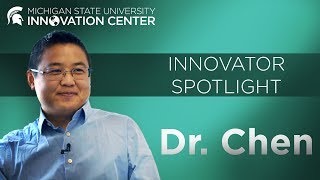 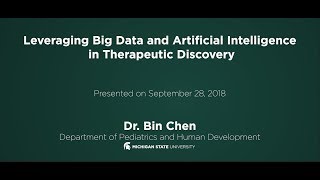 The long-term interest of the Chen lab is to harness big genomic data and artificial intelligence to discover new or better therapeutic candidates for cancers through collaborating with bench scientists and clinicians. The past few years have witnessed the generation of voluminous omics data across multiple modalities —from bulk tissues to single cells, from patients to preclinical models, from disease samples to drug-treatment samples. The Chen lab develops advanced AI methods to find molecular patterns for diseases and drugs and then match a disease to the best drug based on those patterns. Using this approach, they have successfully identified drug candidates for three cancers: Ewing’s sarcoma (Oncotarget, 2016), liver cancer (Gastroenterology, 2017) and basal cell carcinoma (JCI Insight, 2017). They recently discovered that deworming pills might be used to treat liver cancer. Now they are using a similar strategy to discover new therapeutics for rare diseases including DIPG, a pediatric cancer with a five-year survival rate of less than 1%.


Dr. Chen was recruited to MSU through the Global Impact Initiative. Prior to this position, Dr. Chen was an assistant professor in the Institute for Computational Health Sciences at University of California, San Francisco. Dr. Chen is also the founding member of DahShu, a non-profit organization to promote research and education in data sciences. Dr. Chen trained as a chemist in college, worked as a software engineer before graduate school, trained as a chem/bioinformatician in graduate school, worked as a computational scientist at Novartis, Pfizer and Merck. He received his PhD in informatics at Indiana University, Bloomington and pursued postdoctoral training in Dr. Atul Butte’s lab at Stanford University. His work has been featured in STAT, GEN, GenomeWeb and KCBS. As a PI, he has received >$4.5 million research funding. He has also contributed to several big grants (e.g., P01 and U24) as a co-investigator.

Researchers team up to find new treatments for 'orphan diseases'

Bin Chen, an assistant professor in the College of Human Medicine’s Departments of Pediatrics and Human Development, Pharmacology and Toxicology, is on a mission to help find new or better treatments for an estimated 6,000 diseases considered too rare to attract much research.

Bin Chen, PhD, is on a mission to help find new or better treatments for an estimated 6,000 diseases considered too rare to attract much research. "Although individually those diseases afflict relatively few people, combined they are suffered by about 25 million Americans, some whose illnesses are life-threatening," said Chen, an assistant professor in the College of Human Medicine's Departments of Pediatrics and Human Development, and Pharmacology and Toxicology.

Bin Chen, PhD, is on a mission to help find new or better treatments for an estimated 6,000 diseases considered too rare to attract much research.

Researchers are analyzing large volumes of data, often referred to as big data, to determine better research models to fight the spread of breast cancer and test potential drugs. "The differences between cell lines and tumor samples have raised the critical question to what extent cell lines can capture the makeup of tumors," said Bin Chen, senior author and assistant professor in the College of Human Medicine.

Computational Discovery of Niclosamide Ethanolamine, a Repurposed Drug Candidate That Reduces Growth of Hepatocellular Carcinoma Cells In Vitro and in Mice by Inhibiting Cell Division Cycle 37

2017 The decreasing cost of genomic technologies has enabled the molecular characterization of large-scale clinical disease samples and of molecular changes upon drug treatment in various disease models. Exploring methods to relate diseases to potentially efficacious drugs through various molecular features is critically important in the discovery of new therapeutics. Here we show that the potency of a drug to reverse cancer-associated gene expression changes positively correlates with that drug’s efficacy in preclinical models of breast, liver and colon cancers. Using a systems-based approach, we predict four compounds showing high potency to reverse gene expression in liver cancer and validate that all four compounds are effective in five liver cancer cell lines. The in vivo efficacy of pyrvinium pamoate is further confirmed in a subcutaneous xenograft model. In conclusion, this systems-based approach may be complementary to the traditional target-based approach in connecting diseases to potentially efficacious drugs.

2017 The long-term overall survival of Ewing sarcoma (EWS) patients remains poor; less than 30% of patients with metastatic or recurrent disease survive despite aggressive combinations of chemotherapy, radiation and surgery. To identify new therapeutic options, we employed a multi-pronged approach using in silico predictions of drug activity via an integrated bioinformatics approach in parallel with an in vitro screen of FDA-approved drugs. Twenty-seven drugs and forty-six drugs were identified, respectively, to have anti-proliferative effects for EWS, including several classes of drugs in both screening approaches. Among these drugs, 30 were extensively validated as mono-therapeutic agents and 9 in 14 various combinations in vitro. Two drugs, auranofin, a thioredoxin reductase inhibitor, and ganetespib, an HSP90 inhibitor, were predicted to have anti-cancer activities in silico and were confirmed active across a panel of genetically diverse EWS cells. When given in combination, the survival rate in vivo was superior compared to auranofin or ganetespib alone. Importantly, extensive formulations, dose tolerance, and pharmacokinetics studies demonstrated that auranofin requires alternative delivery routes to achieve therapeutically effective levels of the gold compound. These combined screening approaches provide a rapid means to identify new treatment options for patients with a rare and often-fatal disease.