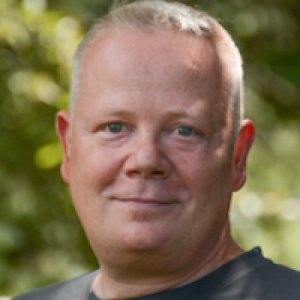 Björn Hamberger is an assistant professor in the Department of Biochemistry and Molecular Biology in the College of Natural Science.

Björn Hamberger: When science and art come together

The Science Gallery Detroit is the first U.S. representation of a global university-linked network dedicated to public outreach at the intersection of science and art. Exhibitions aim at 15- to 25-year-olds by bridging emerging scientific areas with design and technology.

An emerging field — synthetic biology — is attempting to broadly address the need for more nutritious food, improved prevention and treatment of diseases, renewable energy sources and protection for the environment.

2018 The invention relates to recombinant microorganisms and methods for producing acetylated diterpenes, including oxidized and/or acetylated oxidized diterpenes such as forskolin.

2019 The mint family (Lamiaceae) is well documented as a rich source of terpene natural products. More than 200 diterpene skeletons have been reported from mints, but biosynthetic pathways are known for just a few of these.

2019 Cytosolic lipid droplets are endoplasmic reticulum-derived organelles typically found in seeds as reservoirs for physiological energy and carbon to fuel germination. Here, we report synthetic biology approaches to co-produce high-value sesqui- or diterpenoids together with lipid droplets in plant leaves. The formation of cytosolic lipid droplets is enhanced in the transient Nicotiana benthamiana system through ectopic production of WRINKLED1, a key regulator of plastid fatty acid biosynthesis, and a microalgal lipid droplet surface protein. Engineering of the pathways providing the universal C5-building blocks for terpenoids and installation of terpenoid biosynthetic pathways through direction of the enzymes to native and non-native compartments boost the production of target terpenoids. We show that anchoring of distinct biosynthetic steps onto the surface of lipid droplets leads to efficient production of terpenoid scaffolds and functionalized terpenoids. The co-produced lipid droplets “trap” the terpenoids in the cells.

2019 Teak, a member of the Lamiaceae family, produces one of the most expensive hardwoods in the world. High demand coupled with deforestation have caused a decrease in natural teak forests, and future supplies will be reliant on teak plantations. Hence, selection of teak tree varieties for clonal propagation with superior growth performance is of great importance, and access to high-quality genetic and genomic resources can accelerate the selection process by identifying genes underlying desired traits.

2019 Members of the mint family (Lamiaceae) accumulate a wide variety of industrially and medicinally relevant diterpenes. We recently sequenced leaf transcriptomes from 48 phylogenetically diverse Lamiaceae species. Here, we summarize the available chemotaxonomic and enzyme activity data for diterpene synthases (diTPSs) in the Lamiaceae and leverage the new transcriptomes to explore the diTPS sequence and functional space. Candidate genes were selected with an intent to evenly sample the sequence homology space and to focus on species in which diTPS transcripts were found, yet from which no diterpene structures have been previously reported. We functionally characterized nine class II diTPSs and 10 class I diTPSs from 11 distinct plant species and found five class II activities, including two novel activities, as well as a spectrum of class I activities. Among the class II diTPSs, we identified a neo-cleroda-4(18),13E-dienyl diphosphate synthase from Ajuga reptans, catalyzing the likely first step in the biosynthesis of a variety of insect-antifeedant compounds. Among the class I diTPSs was a palustradiene synthase from Origanum majorana, leading to the discovery of specialized diterpenes in that species. Our results provide insights into the diversification of diterpene biosynthesis in the mint family and establish a comprehensive foundation for continued investigation of diterpene biosynthesis in the Lamiaceae.

2018 BACterial Hosts for production of Bioactive phenolics from bERRY fruits (BacHBerry) was a 3-year project funded by the Seventh Framework Programme (FP7) of the European Union that ran between November 2013 and October 2016. The overall aim of the project was to establish a sustainable and economically-feasible strategy for the production of novel high-value phenolic compounds isolated from berry fruits using bacterial platforms. The project aimed at covering all stages of the discovery and pre-commercialization process, including berry collection, screening and characterization of their bioactive components, identification and functional characterization of the corresponding biosynthetic pathways, and construction of Gram-positive bacterial cell factories producing phenolic compounds. Further activities included optimization of polyphenol extraction methods from bacterial cultures, scale-up of production by fermentation up to pilot scale, as well as societal and economic analyses of the processes. This review article summarizes some of the key findings obtained throughout the duration of the project.