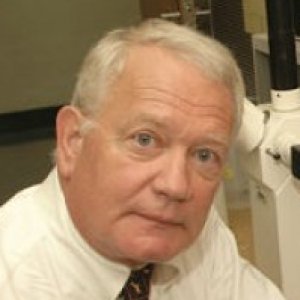 
Bob Cousins’ research focuses on understanding the nutritional significance of zinc and how it acts as a signaling molecule.

Dr. Cousins’ research focuses on understanding the nutritional significance of zinc and how this micro-nutrient acts as a signaling molecule where specific zinc transporters target zinc to cellular sites to influence function. His laboratory makes extensive use of mutant mouse models and cell level experimentation and capitalizes on techniques of molecular biology and state-of-the-art analytical methods. He has trained over 75 doctoral students and postdoctoral associates. Dr. Cousins has been President of both FASEB and the American Society for Nutrition and has received numerous research awards. He is an elected member of the National Academy of Sciences.

2020 Zinc has been shown to influence intestinal barrier function. To function properly, zinc must be placed at specific sites of action in cells. Previously, we demonstrated that the zinc transporter Zip14 (Slc39a14) is highly expressed in the small intestine and is localized to the basolateral membrane of enterocytes. Ablation of Zip14 in mice produces a phenotype that includes increased intestinal permeability and metabolic endotoxemia. To investigate the mechanism involved, we performed genome-wide examination of gene expression in the small intestine from WT and Zip14 KO mice using Illumina RNA sequencing. This RNAseq analysis revealed that among 1079 long non-coding (lnc) RNAs profiled, 36 annotated lncRNAs were identified as overexpressed in intestines of Zip14 KO mice. H19 RNA was the most highly overexpressed lncRNA. Read densities of other selected lncRNAs demonstrated specificity in the differential expression of H19 in the intestine of the KO mice. Upon confirmation using qPCR, we found that H19 was significantly up-regulated in intestines of the Zip14 KO mice. Up-regulation of miR-675-5p, a microRNA derived from H19, was also demonstrated. Intestinal epithelial cells (IEC) isolated by a chelation method revealed high expression of intestinal alkaline phosphatase and Zip14 mRNAs, indicative of substantial enterocyte-enrichment. Expression of H19, but not miR-675-5p, was localized to the isolated IECs. Markedly enhanced expression of H19 was detected in IECs from the Zip14 KO mice compared to WT mice. The increased H19 expression in Zip14 KO mice was limited to IECs and skeletal muscle of the six tissues examined. IECs were also isolated from intestine-specific Zip14 KO (I-KO) mice. The up-regulation of H19 was observed in IECs from the I-KO mice compared to those from flox/flox controls, but miR-675-5p expression was not different between cells from the two genotypes. These data suggest that intestinal H19 is produced by IECs and is up-regulated with Zip14 ablation. H19 overexpression suggests it is involved in a molecular defect in intestinal function of Zip14, perhaps including intestinal barrier dysfunction.

2020 Manganese exposure produces Parkinson's-like neurologic symptoms, suggesting a selective dysregulation of dopamine transmission. It is unknown, however, how manganese accumulates in dopaminergic brain regions or how it regulates the activity of dopamine neurons. Our in vivo studies in male C57BLJ mice suggest that manganese accumulates in dopamine neurons of the VTA and substantia nigra via nifedipine-sensitive Ca2+ channels. Manganese produces a Ca2+ channel-mediated current, which increases neurotransmitter release and rhythmic firing activity of dopamine neurons. These increases are prevented by blockade of Ca2+ channels and depend on downstream recruitment of Ca2+-activated potassium channels to the plasma membrane. These findings demonstrate the mechanism of manganese-induced dysfunction of dopamine neurons, and reveal a potential therapeutic target to attenuate manganese-induced impairment of dopamine transmission.

2020 Impaired manganese (Mn) homeostasis can result in excess Mn accumulation in specific brain regions and neuropathology. Maintaining Mn homeostasis and detoxification is dependent on effective Mn elimination. Specific metal transporters control Mn homeostasis. Human carriers of mutations in the metal transporter ZIP14 and whole body Zip14-knockout (WB-KO) mice display similar phenotypes, including spontaneous systemic and brain Mn overload and motor dysfunction. Initially, it was believed that Mn accumulation due to ZIP14 mutations was caused by impaired hepatobiliary Mn elimination. However, liver-specific Zip14-KO mice did not show systemic Mn accumulation or motor deficits. ZIP14 is highly expressed in the small intestine and is localized to the basolateral surface of enterocytes. Thus, we hypothesized that basolaterally localized ZIP14 in enterocytes provides another route for the elimination of Mn. Using wild-type and intestine-specific Zip14-KO (I-KO) mice, we have shown that ablation of intestinal Zip14 is sufficient to cause systemic and brain Mn accumulation. The lack of intestinal ZIP14-mediated Mn excretion was compensated for by the hepatobiliary system; however, it was not sufficient to maintain Mn homeostasis. When supplemented with extra dietary Mn, I-KO mice displayed some motor dysfunctions and brain Mn accumulation based on both MRI imaging and chemical analysis, thus demonstrating the importance of intestinal ZIP14 as a route of Mn excretion. A defect in intestinal Zip14 expresssion likely could contribute to the Parkinson-like Mn accumulation of manganism.

2020 Skeletal muscle represents the largest pool of body zinc, however, little is known about muscle zinc homeostasis or muscle-specific zinc functions. Zip14 (Slc39a14) was the most highly expressed zinc transporter in skeletal muscle of mice in response to LPS-induced inflammation. We compared metabolic parameters of skeletal muscle from global Zip14 knockout (KO) and wild-type mice (WT). At basal steady state Zip14 KO mice exhibited a phenotype that included muscle wasting and metabolic endotoxemia. Microarray and qPCR analysis of gastrocnemius muscle RNA revealed that ablation of Zip14 produced increased muscle p-Mef2c, Hspb7 and miR-675-5p expression and increased p38 activation. ChIP assays showed enhanced binding of NF-κβ to the Mef2c promoter. In contrast, LPS-induced systemic inflammation enhanced Zip14-dependent zinc uptake by muscle, increased expression of Atrogin1 and MuRF1 and markedly reduced MyoD. These signatures of muscle atrophy and cachexia were not influenced by Zip14 ablation, however. LPS-induced miR-675-3p and -5p expression was Zip14-dependent. Collectively, these results with an integrative model are consistent with a Zip14 function in skeletal muscle at steady state that supports myogenesis through suppression of metabolic endotoxemia and that Zip14 ablation coincides with sustained activity of phosphorylated components of signaling pathways including p-Mef2c, which causes Hspb7-dependent muscle wasting.

2018 Hyperostosis Cranialis Interna (HCI) is a rare bone disorder characterized by progressive intracranial bone overgrowth at the skull. Here we identified by whole-exome sequencing a dominant mutation (L441R) in SLC39A14 (ZIP14). We show that L441R ZIP14 is no longer trafficked towards the plasma membrane and excessively accumulates intracellular zinc, resulting in hyper-activation of cAMP-CREB and NFAT signaling. Conditional knock-in mice overexpressing L438R Zip14 in osteoblasts have a severe skeletal phenotype marked by a drastic increase in cortical thickness due to an enhanced endosteal bone formation, resembling the underlying pathology in HCI patients. Remarkably, L438R Zip14 also generates an osteoporotic trabecular bone phenotype. The effects of osteoblastic overexpression of L438R Zip14 therefore mimic the disparate actions of estrogen on cortical and trabecular bone through osteoblasts. Collectively, we reveal ZIP14 as a novel regulator of bone homeostasis, and that manipulating ZIP14 might be a therapeutic strategy for bone diseases. 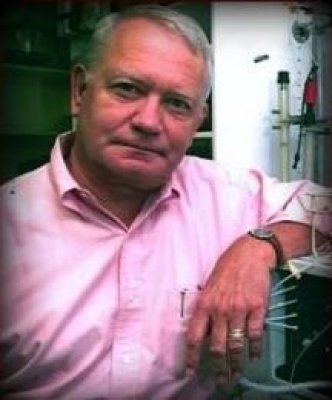