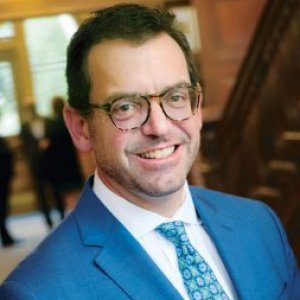 
Brian Edwards examines U.S. literature and culture in a global context, particularly in the Middle East and North Africa. 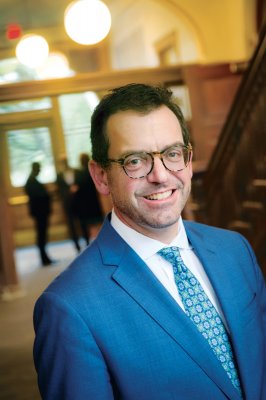 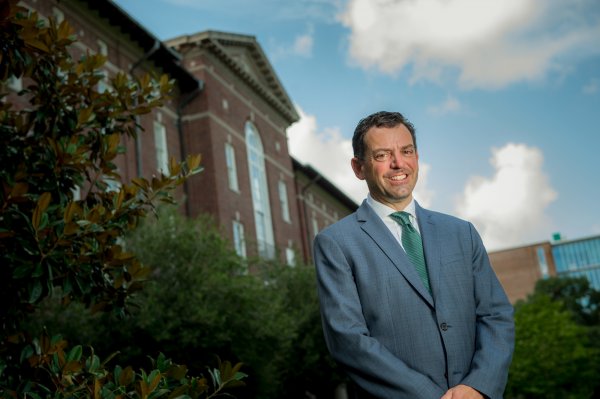 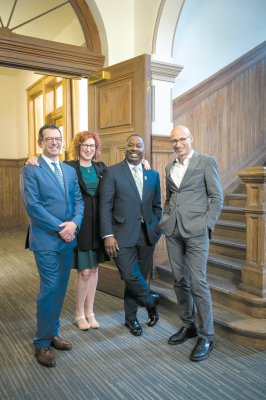 Brian T. Edwards is Dean of the School of Liberal Arts and Professor of English. He joined Tulane University on July 1, 2018.

Prior to Tulane, Edwards was the Crown Professor in Middle East Studies and professor of English and comparative literary studies at Northwestern University, where he was also the founding director of the Program in Middle East and North African Studies (MENA). Under Edwards’ direction, MENA grew from a small faculty working group to an internationally recognized program with 20 core and language faculty and 13 affiliates, offering an undergraduate major, curricula in Middle Eastern languages, and an interdisciplinary Ph.D. certificate.

As a scholar, Edwards examines U.S. literature and culture in a global context, particularly in the Middle East and North Africa. He also writes about literature, film, and new media from Morocco, Egypt and Iran, where he has done extensive field research. He is the author of "Morocco Bound: Disorienting America's Maghreb, from Casablanca to the Marrakech Express" (Duke, 2005) and "After the American Century: The Ends of U.S. Culture in the Middle East" (Columbia, 2016), co-editor of "Globalizing American Studies" (Chicago, 2010) and editor of "On the Ground: New Directions in Middle East and North African Studies" (NU-Q, 2013). Edwards has published essays and Op-Eds in a wide range of publications, both scholarly and mainstream, and lectured extensively throughout the US, Europe, the Middle East, North Africa and Central and South Asia. His research has been supported by major grants from the Carnegie Corporation of New York, the Andrew Mellon Foundation, and the Fulbright Program. In 2013, the Chicago Council on Global Affairs named him an “Emerging Leader.”

Edwards is an advocate for renewed approaches to language learning, at both university and K-12 levels. A speaker of four languages himself, he led language initiatives at Northwestern and in partnership with Chicago Public Schools. From 2016 to 2017, he served on the American Academy of Arts and Sciences’ Commission on Language Learning, which was charged by a bipartisan group of members of Congress to examine language education in the US and make recommendations for ways to meet the nation’s future education needs.

June 2013 Chicago Council on Global Affairs Named one of 21 young leaders in Chicago area whose work will help equip Chicago to compete and thrive in the global era.

June 2012 A $50,000 award subsequent to the original New Directions Award to allow for time to write a book manuscript.

Louisiana's unique 'jungle primary' system could be on its way out

The shift to the jungle system, which has been tweaked over the years, was initiated by then-Gov. Edwin Edwards as a way to fend off Democratic challengers, Mhire said. "The idea was to move into the open primary (so), in a sense, it's harder to get behind an opposition Democrat," Mhire said. "When you move to an open system, it's sort of a fee-for-all."...

A university news release says Brian Edwards will assume the post July 1. Edwards is currently the Crown Professor in Middle East Studies at Northwestern University, where he also is a professor of English, comparative literary studies and American studies. Under Edwards’ direction, that program grew into an internationally recognized program offering an undergraduate major and minor, curricula in Middle Eastern languages and an interdisciplinary PhD certificate...

Tulane School of Liberal Arts to get new dean

The School of Liberal Arts at Tulane University in New Orleans soon will have a new dean. A university news release says Brian Edwards will assume the post July 1. Edwards is currently the Crown Professor in Middle East Studies at Northwestern University, where he also is a professor of English, comparative literary studies and American studies. Under Edwards' direction, that program grew into an internationally recognized program offering an undergraduate major and minor, curricula in Middle Eastern languages and an interdisciplinary PhD certificate. Edwards received his bachelor's degree in English from Yale University in 1990. He earned his master's degree, his master of philosophy degree and his PhD, all in American studies, from Yale...

Trump from Reality TV to Twitter, or the Selfie-Determination of Nations

Arizona Quarterly: A Journal of American Literature, Culture, and Theory

2018 The age of Trump has ushered in a reorganization of the way American culture circulates through the world. Beginning with the 2015 campaign, the global circulation of Trump’s rhetoric ruptured the crucial divide between popular culture and political discourse, the conditions under which the “American century” functioned. The essay discusses the relationship of the rise of the digital technologies to new social forms that began emerging in the final years of the twentieth-century, accompanied by novel forms of entertainment. The increasing popularity of reality television and social media as entertainment inform what I call the selfie-determination of nations: a digitally mediated, imagined community of the disconnected. This mediated context of social organization is the digital ground upon which Trump campaigned and thus far governs, and connected to the rise of global populisms. Under Trump the US political system itself has become a form of global entertainment.

The World, the Text, and the Americanist

2013 We have entered a period of time when the meanings attached to the US in the world have shifted decisively. In the Middle East and North Africa, there is widespread distrust of American imperial intentions. As the global economic crisis persists, the US economy has entered what some prominent economists have called its “autumn,” a putative decline from its apex during the twentieth century. During the exciting winter and spring of 2011, a wave of global protests for democracy in the Arab world did not look to American models for sustenance or inspiration. Indeed, members of an apparently spontaneous movement in the US, Occupy Wall Street and its many affiliates, avowed that they had looked to the Middle East for their own inspiration.2 Many, if not all, of the sustaining principles that Americans have held dear through the last half of the twentieth century have been questioned—and no longer on the margins of the left, but at the heart of American public discourse.

2010 There are several provocative assertions in Gordon Sayre's essay "Renegades in Barbary" that together make a compelling case for rethinking the ways in which we consider captivity narratives in light of the recent scholarly turn toward the Mediterranean and "the Muslim world." As Sayre rightly notes, this turn, spurred by the geopolitics of the past decade, which has made US political incursions in the Middle East and captivity of both Americans abroad and transnational Muslims at Guantanamo Bay subjects of popular fascination and political crisis, may be seen both in studies of the early American republic and in Americanist work treating subsequent periods. Too often, it would appear, scholars working outside the period have caricatured narratives of American captivity in Muslim hands during the early republic, forgoing a richer understanding of the literary and political engagement with North Africa in the late eighteenth century. That this is done in terms that feed into and are made comprehensible by present concerns is troubling and demands corrective measures.

Preposterous Encounters: Interrupting American Studies with the (Post)Colonial, or Casablanca in the American Century

Comparative Studies of South Asia, Africa and the Middle East

2003 Is it rude, in company, to interrupt? Not a social question, of course, but a field question—namely, how not to be properly disciplined? The same question, rephrased: when is critical preposterousness warranted? This essay responds to critical impasses in the encounter of American Studies and postcolonial studies: competing assertions that the United States is from the start postcolonial versus denials that it has ever or yet undergone decolonization and institutional disincentives and disciplinary impulses against comparative, multilingual, and multi-sited work. Drawing its urgency from the multiple emergencies made visible and exacerbated by 9/11/01, especially the pedagogical and institutional crises that follow that rupture, the essay argues for a "preposterous encounter" of the two critical approaches, one which productively harnesses the energies signified by the word preposterous, a word which etymologically yokes the pre- and the post-. Such an encounter focuses on unraveling the pernicious uses of temporal/spatial/linguistic manipulation named by Henry Luce's phrase "the American century" and performed by his 1941 essay of the same title, a manipulation that is the hallmark of U.S. cultural production representing the foreign since 1941 and the place of U.S. cultural production in globalization.

Film & History: An Interdisciplinary Journal of Film and Television Studies,

2001 With the end of the cold war, a new foe quickly took the place of Soviet communism in the imagination of many Americans. Much of the same energy that animated Americans' fear of the "red" menace (the allegedly inexorable and atheistic plot for world domination on the part of the Soviets) shifted during the 1990s to panic in response to the "green" terror (the unpredictable use of terrorism by militant Islamic fundamentalists).2 The fear of usually unseen terrorists vaguely and sbirietimës erroneously described as "Arab" recurs in many of the same forms used to express the paranoia of Soviet invasion. As during the red scare of the late 1940s and 1950s, the phobia of Islamic terrorism is intensified by the impossibility of locating a single source and thereby containing it. Individual citizens imagine collaborators everywhere and redefine "un-Americanness" in terms of ethnic and religious difference, supposed pillars of American tolerance. The impulse to put a nationality, an ethnicity, a religion or a race on the work of scattered individuals, and to hold the millions more who share some of those identities equally responsible for the crimes ofthe few seems an impulse left over from the cold war, which was characterized as a Manichaean struggle between "good" and "evil" in stark national, religious and racial terms.