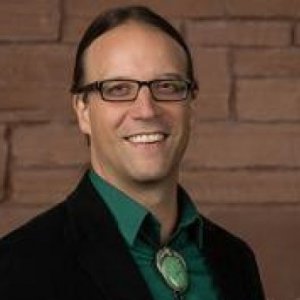 Dr. Chad S. Hamill, Ph.D. served as Vice President for Native American Initiatives at Northern Arizona University, where he maintains a faculty position in the Department of Applied Indigenous Studies. Tasked with advancing NAU’s strategic goal to become the nation’s leading university serving Native Americans, Dr. Hamill established the Office of Native American Initiatives (ONAI) in 2016. With an emphasis on expanding educational opportunities for Native American students and their communities, ONAI has developed programs in the areas of tribal leadership, environmental stewardship, culturally-responsive K12 pedagogy, and Native mentorship. In addition to working in collaboration with many of the 22 Native nations in Arizona, ONAI has cultivated partnerships with Indigenous programs and communities in Canada, Australia and New Zealand.

An ethnomusicologist, Dr. Hamill’s scholarship is focused on song traditions of the Interior Northwest US, including those carried by his Spokane ancestors. In addition to his book, Songs of Power and Prayer in the Columbia Plateau (Oregon State University Press) he has produced numerous articles centered on Columbia Plateau songs and ceremony, exploring topics ranging from sovereignty to Indigenous ecological knowledge.

In addition to his academic positions, Hamill serves as Vice President and Treasurer of the Spokane Language House, a 501c3 that contributes to the sustainability of the Spokane language.