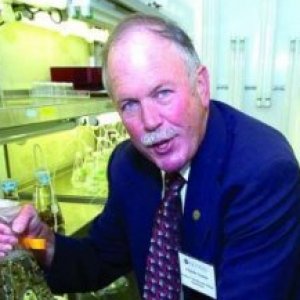 
Dr. Yarish is an expert in marine macroalgae, coastal management and commercial uses for seaweed for food, cosmetics and biofuels.

Professor Charles Yarish received his Ph.D. from Rutgers University (1976) and then joined the faculty at the University of Connecticut (1976) where he is in the Department of Ecology & Evolutionary Biology and The Department of Marine Sciences. He has also been an adjunct Professor of Marine Sciences at the State University of New York at Stony Brook, visiting Scientist at the Biologische Anstalt Helgoland, Germany, a visiting Professor of Marine Biology at the University of Groningen, The Netherlands, and most recently, a Guest Professor at Shanghai Fisheries University, China. He has served with many organizations including the International Executive Service Corps’ Aquacultural Project (Kenya), member of the Organizing Committee & the Executive Secretariat for the Vth International Phycological Congress, Qingdao, China and The Advisory Board of the Institute of BioSciences (Halifax), National Research Council of Canada and a member of the RCN for the US National Science Foundation genome project on Porphyra. Prof. Yarish received the 1992 Marinalg Award’s First Prize at the XIVth International Seaweed Symposium, Brittany, France, for his work in East Africa (Kenya) judged to be the most useful to the economic development of the world seaweed industry. He has also been a national lecturer, the elected secretary, member of the Phycological of America’s Executive Committee and President (2001). He has been an invited participant in many international invited symposia and meetings in Canada, Chile, Cuba, Germany, Ireland, Japan, People’s Republic of China, Mexico, Portugal, South Africa, South Korea, Spain, The Netherlands and the USA, which have dealt with the ecophysiology and biogeography of seaweeds. At UCONN, he developed an internationally known laboratory for seaweed R&D and intimately involved in the development of the global seaweed aquaculture industry and in particular in the USA. He is most interested in the development of integrated multi-trophic aquaculture (IMTA) and nutrient bioextraction systems where seaweeds are a key extractive component.

Seaweed farming and its surprising benefits

Kelp take up carbon dioxide like any plant does, and it just so happens it lives in the water. There are winners and losers in ocean acidification. Organisms that produce carbonate shells like shellfish, they're a loser. They can't handle the lower PH. They can't deposit as much calcium in their shells. On the other hand, when seaweeds like kelp, they actually pick up that carbon dioxide because now it's easier for them to do photosynthesis, says Charles Yarish.

Superhero of the sea: “Seaweed Cheetos” could be the next key to fighting global warming

“Seaweed is very important for its natural ecosystem values,” Charles Yarish, PhD, leading seaweed expert and a professor in the department of ecology and evolutionary biology at University of Connecticut, told Salon. “Farming it is a win-win for the environment and the economy.” So, how is it that these rootless sea tangles are on their way to major cash-crop status?

Can We Save the Oceans By Farming Them?

Bren Smith, a 44-year-old Newfoundland-born former cod fisherman, grows shellfish and the newly trendy sea vegetable kelp on what he calls “the world’s first 3D ocean farm” off the Connecticut shore in Long Island Sound. His multi-species hanging garden has already become a model for a new kind of low-impact aquaculture that, he says, can produce the cheapest and most ecologically sustainable food on the planet. horeline communities are offering concessional rates to ocean farmers in part because they recognize the environmental benefits. They are benefits that University of Connecticut marine biologist Charles Yarish has been scientifically documenting. Smith approached Yarish, a seaweed expert, after hurricanes Irene and Sandy smothered Smith’s shellfish beds under blankets of mud. Yarish introduced Smith to the ocean farm idea, whose key feature is suspending the growing area above the sea floor, making it less vulnerable to storms.

Seaweed cultivation in the U.S. is growing quickly, cresting on its promise as a sustainable, low-impact form of aquaculture that could help feed millions. But tough state rules surrounding commercial use of coastal resources are preventing many would-be entrepreneurs from diving into the market. Fifteen farms currently have permits to commercially grow kelp in the Northeast, up from zero prior to 2008, according to Dr. Charles Yarish, an internationally recognized seaweed expert and professor in the Department of Ecology and Evolutionary Biology at the University of Connecticut in Stamford. Some of the new farms are using a technique known as vertical or 3-D farming – using the water column to grow a mix of seaweed and shellfish – to get the most out of their relatively small operations.

Insights into the red algae and eukaryotic evolution from the genome of Porphyra umbilicalis (Bangiophyceae, Rhodophyta)

2017 Porphyra umbilicalis (laver) belongs to an ancient group of red algae (Bangiophyceae), is harvested for human food, and thrives in the harsh conditions of the upper intertidal zone. Here we present the 87.7-Mbp haploid Porphyra genome (65.8% G + C content, 13,125 gene loci) and elucidate traits that inform our understanding of the biology of red algae as one of the few multicellular eukaryotic lineages. Novel features of the Porphyra genome shared by other red algae relate to the cytoskeleton, calcium signaling, the cell cycle, and stress-tolerance mechanisms including photoprotection. Cytoskeletal motor proteins in Porphyra are restricted to a small set of kinesins that appear to be the only universal cytoskeletal motors within the red algae. Dynein motors are absent, and most red algae, including Porphyra, lack myosin. This surprisingly minimal cytoskeleton offers a potential explanation for why red algal cells and multicellular structures are more limited in size than in most multicellular lineages. Additional discoveries further relating to the stress tolerance of bangiophytes include ancestral enzymes for sulfation of the hydrophilic galactan-rich cell wall, evidence for mannan synthesis that originated before the divergence of green and red algae, and a high capacity for nutrient uptake. Our analyses provide a comprehensive understanding of the red algae, which are both commercially important and have played a major role in the evolution of other algal groups through secondary endosymbioses.

Cultivation of a morphologically distinct strain of the sugar kelp, Saccharina latissima forma angustissima, from coastal Maine, USA, with implications for ecosystem services

2017 Consumer interest and demand for North Atlantic sourced sea vegetables drives opportunities for aquaculture development in the northeast USA. The unique morphology and desirable culinary traits of the wild narrow-bladed kelp, Saccharina latissima forma angustissima, were successfully translated into a cultivated crop on two geographically distinct open-water farms in Maine, USA. Environmental conditions, growth, and tissue analysis were quantified. Peak meristematic growth rates for blade length occurred from March through April at 2.85 (±0.34) cm day−1. The kelp was harvested from May through June with yields of up to 17 (±4.4) kg m−1 of line and plant density of 330 plants m−1 of line at the Bristol farm and yields of 13.3 (±6.2) kg wet weight m−1 line and a plant density of 400 plants m−1 of line at the Sorrento farm. Second season yields at Sorrento were on average 24.1 (±6.3) kg m−1 of line. Both farms grew significantly narrower blades of f. angustissima than of the sugar kelp, S. latissima. Common garden experiments with the two morphotypes identified trait stability for length and width, while blade ruffles and thickness varied with the environment. Calculations estimating the nutrient bioextraction capability of the cultivated f. angustissima kelp harvested in June reveal N removal of 88.7 kg ha−1 and C removal of 1666.7 kg ha−1 (combined farm site averages). Overall, this unique kelp form has the potential as a new aquaculture crop for the Gulf of Maine while providing several coastal ecosystem services.

The effects of temperature on the growth rate and nitrogen content of invasive Gracilaria vermiculophylla and native Gracilaria tikvahiae from Long Island Sound, USA

2017 The red alga Gracilaria vermiculophylla, a species native to the waters of Korea and Japan, has invaded marine coastal areas of Europe and the Americas, thriving in conditions that differ from those of its native habitat. In recent years, G. vermiculophylla has been discovered in the Long Island Sound (LIS) estuary growing alongside the native congener Gracilaria tikvahiae. The goal of this study was to determine whether the two strains of G. vermiculophylla from different regions of the world have evolved genetic differences (i.e., ecotypic differentiation) or if the physiological performance of the strains simply reflects phenotypic plasticity. Two strains of G. vermiculophylla (isolated in Korea and LIS) and a strain of the LIS native G. tikvahiae were grown for four weeks under temperatures ranging from 20 to 34°C using a temperature gradient table (all other environmental conditions were kept constant). At the end of each week, wet weight of each sample was recorded, and thalli were reduced to the original stocking density of 1 g L−1 (excess biomass was preserved for tissue carbon and nitrogen analysis). Generally, the growth rates of Korean G. vermiculophylla > LIS G. vermiculophylla > G. tikvahiae. After one week of growth G. tikvahiae grew 9.1, 12.0, 9.4, and 0.2% d−1, at temperatures of 20, 24, 29, and 34°C, respectively, while G. vermiculophylla (LIS) grew 6.6, 6.2, 5.7, and 3.6% d−1. G. vermiculophylla (Korea) grew 15.4, 22.9, 23.2, and 10.1% d−1, much higher than the two strains currently inhabiting the LIS. On average, the LIS G. vermiculophylla strain contained 4–5% DW N, while the Korean strain and G. tikvahiae had more modest levels of 2–3% N DW. However, tissue N content declined as temperature increased in LIS and Korean G. vermiculophylla. The non-native haplotype may have evolved genetic differences resulting in lower growth capacity while concentrating significantly more nitrogen, giving the non-native a competitive advantage.

2017 Seaweed aquaculture technologies have developed dramatically over the past 70 years mostly in Asia and more recently in Americas and Europe. However, there are still many challenges to overcome with respect to the science and to social acceptability. The challenges include the development of strains with thermo-tolerance, disease resistance, fast growth, high concentration of desired molecules, the reduction of fouling organisms and the development of more robust and cost efficient farm systems that can withstand storm events in offshore environments. It is also important to note that seaweed aquaculture provides ecosystem services, which improve conditions of the coastal waters for the benefit of other living organisms and the environment. The ecosystem services role of seaweed aquaculture and its economic value will also be quantitatively estimated in this review.

2017 The invasive rhodophyte Grateloupia turuturu is a large perennial alga, discovered first in Narragansett Bay (Rhode Island) in 1994 and subsequently in the Long Island Sound estuary. The alga's low intertidal to shallow subtidal distribution overlaps that of the native Chondrus crispus. Our field measurements suggest that physical disturbance may promote increased substrate cover by G. turuturu. Molecular quantification of spore abundance suggests G. turuturu produces fewer spores, which also disperse shorter distances than spores of C. crispus. However, sporelings of G. turuturu grew faster than those of C. crispus at all environmentally relevant light levels, salinities and temperatures tested. In addition, the temperature tolerance of G. turuturu sporelings was broader; C. crispus sporelings died just after germination at 30°C; whereas, those of G. turuturu survived. The results have implications for community shifts as coastal waters continue to warm into the future.