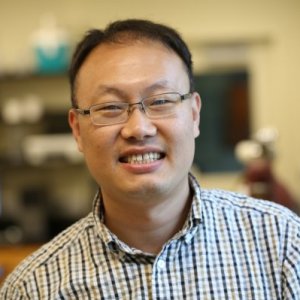 
Professor Sim's research is focused predominantly on the vector biology of human pathogens. 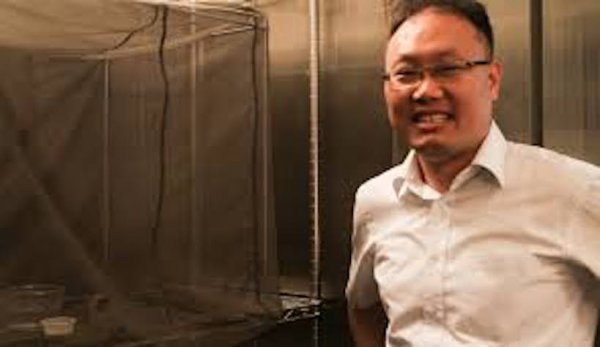 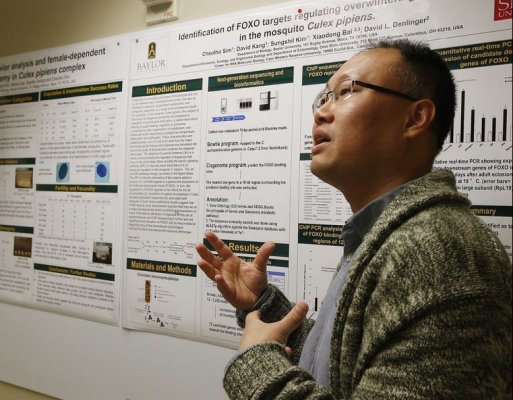 One of conspicuous void in our understanding of vector biology is how mosquitoes and other disease vectors regulate their seasonal development. Within the temperate zones, mosquitoes limited temporally to just a few months of active development. The remaining months are spent in a dormancy period known as diapause. Thus we are interested in determining the molecular mechanisms by which gene products exert this alternative developmental pathway. An applied aspect of this work is the potential utilization of this phenotype to discover novel developmental and metabolic inhibitors of arthropod vectors of human pathogens.

Ten Baylor University faculty members have been selected to serve as 2019-2020 Baylor Fellows for their excellence in teaching and desire to transform student thinking through innovation.

Duhrkopf and his biologist colleague Cheolo Sim raise and study mosquitoes in a warm, humid vault in an on-campus laboratory. They and their students have worked for years to sample mosquitoes around McLennan County, helping local health officials monitor the mosquito that carries West Nile virus ...

Dr. Cheolho Sim, assistant professor of biology, has a laboratory that is as dark, hot and humid as a rainforest. He keeps various species of mosquitoes there and works on ways to prevent them from spreading tropical diseases. He is one of several Baylor scientists in the battle to eliminate mosquito-transmitted diseases, which in developing countries claim millions of lives every year.

2016 Diapause is a critical eco-physiological adaptation for winter survival in the West Nile Virus vector, Culex pipiens, but little is known about the molecular mechanisms that distinguish diapause from non-diapause in this important mosquito species. We used Illumina RNA-seq to simultaneously identify and quantify relative transcript levels in diapausing and non-diapausing adult females. Among 65,623,095 read pairs, we identified 41 genes with significantly different transcript abundances between these two groups. Transcriptome divergences between these two phenotypes include genes related to juvenile hormone synthesis, anaerobic metabolism, innate immunity and cold tolerance.

2015 Recent studies have revealed diverse patterns of cytoplasmic incompatibility (CI) induced by Wolbachia in the two spotted spider mite (Tetranychus urticae Koch). The mechanism of CI consists of two steps: modification (mod) of sperm of infected males and the rescue (resc) of these chromosomes by Wolbachia in the egg, which results in female embryonic mortality (FM), male development (MD) or no CI. Our study reports that Wolbachia infections were highly prevalent infecting all T. urticae populations from various crops in 14 commercial greenhouses in Korea, with two Wolbachia strains expressing distinctive phenotypic effects on hosts. Analyses for wsp gene sequences obtained from collected mite populations revealed all sequences were categorized into two groups (group W1 and W2) discriminated by three diagnostic nucleotides while all Wolbachia strains belonged to the subgroup Ori in Wolbachia supergroup B. Host plants of each mite population were also generally correlated this grouping. Various mating experiments with two mite populations from each group showed that CI patterns and host plants of the mite populations were completely matched with the grouping; no CI (mod−resc+) for group W1 and mixed pattern of FM and MD (mod+resc+) for group W2. No distinct changes in fecundity or sex ratio due to Wolbachia infections were observed in four mite populations regardless of Wolbachia grouping. Our study suggests a potential correlation between phenotypic effect of Wolbachia infection and its genetic diversity associated with host plants in Korean mite populations.

2014 Insulin and juvenile hormone signaling direct entry of the mosquito Culex pipiens into its overwintering adult diapause, and these two critical signaling pathways appear to do so by converging on the regulation of forkhead transcription factor (FOXO). Diapause is a complex phenotype, and FOXO emerges as a prime candidate for activating many of the diverse physiological pathways that generate the diapause phenotype. Here, we used ChIP sequencing to identify direct targets of FOXO. The nearest gene in a 10-kb region surrounding a predicted binding site was extracted for each binding site, resulting in a dataset containing genes potentially regulated by FOXO. By selecting candidate genes based on their functional relevance to diapause, we identified five gene categories of potential interest, including stress tolerance, metabolic pathways, lifespan extension, cell cycle and growth regulation, and circadian rhythms. Twelve targets were prioritized for further analysis, 10 of which were validated by ChIP-quantitative PCR and quantitative real-time PCR. These 10 genes activated by FOXO are highly up-regulated during diapause and are thus strong candidates for implementation of the diapause syndrome.

2014 The cessation of juvenile hormone (JH) production is a key endocrine event that halts ovarian development and hence initiates diapause in females of the mosquito, Culex pipiens. The shutdown in endocrine activity of the corpora allata (CA), the source of JH, was manifested in the smaller size of CA in females reared under short daylengths (diapause) compared to those reared under long daylengths (nondiapause), as well as in low expression of the mRNA encoding allatotropin, the neuropeptide that promotes JH biosynthesis in the CA. Genes encoding both allatotropin and allatostatin were identified in C. pipiens, but only expression levels of allatotropin differed in the two types of females. Knockdown of allatotropin mRNA using RNA interference in females programmed for nondiapause resulted in a cessation of ovarian development akin to diapause. This arrest in development could be reversed with an application of JH. Our results thus suggest that suppression of allatotropin is a critical link in regulating the shutdown of the CA during diapause.

2012 Juvenile hormone (JH) controls diverse physiological and developmental events including diapause and nutrient metabolism. The focal point of endocrine regulation in adult reproductive diapause is initiated by a halt of JH synthesis. In diapausing females of the mosquito Culex pipiens, the other key molecular event is the signalling pathway from insulin to forkhead of transcription factor (FOXO). We hypothesized that a halt of JH synthesis is related to activation of FOXO, which results in increasing lipid reserves in the fat body at the onset of the diapause programme. In this study, the full-length sequence of the foxo gene in C. pipiens was characterized, and the protein abundance pattern of the foxo gene product was analyzed by immunoblotting and immunohistochemistry. FOXO was much more abundant in the fat body of diapausing females than in the fat body of nondiapausing females; much lower levels were present in other adult tissues. When we topically applied JH III to diapause-destined females, FOXO was suppressed, and fat accumulation was reduced, suggesting an interaction between JH synthesis and FOXO that is critical for expression of the diapause phenotype.