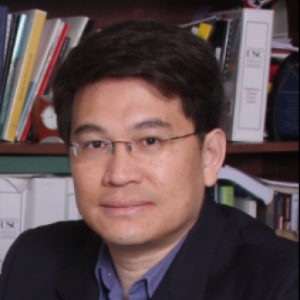 Dr. C. Benson Kuo is the Associate Director of the Consulting Center. He acts as consultant for regulatory compliance, submission requirements, and strategic planning for innovative products developed at USC or by community members. Prior to joining the program, he served as the regulatory affairs manager at Alfred E. Mann Institute, responsible for regulatory support of medical device development and regulatory submissions and compliance with the FDA and IRBs.

Before embarking on his regulatory affairs career, he worked in biotech industry and served as bioinformatics scientist, patent scientist and patent agent.

Dr. Kuo completed his Ph.D. in the field of biomedical sciences and received postdoctoral training at the Stanford University School of Medicine. He is a graduate of the Regulatory Science program and RAC-certified by the Regulatory Affairs Professional Society (RAPS). He is a member of RAPS, OCRA (Orange County Regulatory Affairs Discussion Group), and the CSTA RK group (Clinical and Translational Science Award Regulatory Knowledge).

Methods and materials relating to cd84-like polypeptides and polynucleotides

Methods and Materials Relating to CD84-like Polypeptides and Polynucleotides

American Journal of Physiology-Endocrinology And Metabolism

2000 The purpose of the current study was to determine whether maternal prolactin (PRL) had any effects on bone formation in the developing rat pup. Because the most prevalent forms of PRL in rats are unmodified and phosphorylated PRL, both recombinant PRL and a molecular mimic of phosphorylated PRL (PP-PRL) were administered to pregnant animals. Blood samples from the dams showed normal estrogen and progesterone and no effect of extra PRL on parathyroid hormone (PTH), calcium, or alkaline phosphatase (AP). In newborn pups, however, there was a 30% decrease in blood AP in both PRL-treated groups, whereas PTH and calcium levels were not different from controls. When primary rat osteoblasts were exposed to both PRLs, AP activity was reduced, with PP-PRL being the more potent form of the hormone. Histological examination of pup bone formation showed reduced calvarial bone and reduced endochondral ossification in pups exposed to PP-PRL. These results are the first to show a direct inhibitory effect of PRL on osteoblast function.

1998 Previous studies have demonstrated that naturally phosphorylated PRL antagonizes the growth-promoting effects of unmodified PRL in two different PRL-responsive cell lines. In this study our aim was to produce a molecular mimic of phosphorylated PRL by substituting a fairly bulky, negatively charged amino acid (glutamate or aspartate) for the normally phosphorylated serine [serine 179 in human PRL (hPRL)]. In addition, because of the marked effect of phosphorylation on biological activity, we investigated the importance of the unmodified serine in the growth-promoting activity of PRL. hPRL complementary DNA was obtained from the American Type Culture Collection and subcloned into pT7-SCII after site-directed mutagenesis using the deoxyuridine approach. Proteins were expressed in Escherichia coli BL21 (DE3) and were primarily found in inclusion bodies. Agonist and antagonist activities of each serine 179 mutant were assessed using the Nb2 bioassay. Compared with standard hPRL, the recombinant wild-type was more active in the Nb2 assay, attesting to both the absence, or low level, of endotoxin contamination in preparations from these cells and the appropriate folding of the molecule. The aspartate and glutamate mutants had no intrinsic agonist activity, but both antagonized the growth-promoting activity of wild-type PRL, with the aspartate mutant proving to be a very effective antagonist. Two hundred picograms per ml of the aspartate mutant negated 75% of the growth response to 400 pg/ml wild-type PRL. When serine 179 was mutated to alanine or valine, mutant PRLs with 0% and 14% of the biological activity of wild-type PRL, respectively, were produced. These results demonstrate 1) that molecular mimicry of the phosphorylated hormone does produce a PRL antagonist, and 2) that the serine at position 179 is crucial to the growth-promoting activity of PRL. The aspartate mutant can now be used to study many aspects of the physiology of PRL.