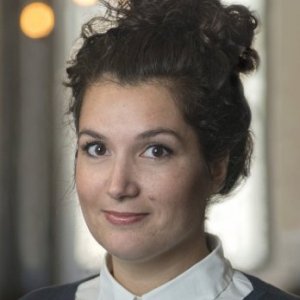 
Chiara Mingarelli is a gravitational-wave astrophysicist, researching how supermassive black holes in the centers of massive galaxies merge.

​Prof. Chiara M. F. Mingarelli is a gravitational-wave astrophysicist based at the University of Connecticut, with a joint appointment at Flatiron Institute's Center for Computational Astrophysics, where she is an Associate Research Scientist. Previously, Mingarelli was a Marie Curie International Outgoing Fellow at the California Institute of Technology, and at the Max Planck Institute for Radio Astronomy, and a Flatiron Fellow.

​Mingarelli received her Ph.D from the University of Birmingham (UK) in 2014, where she worked with Prof. Alberto Vecchio. Her core research is focused on using Pulsar Timing Arrays to detect low-frequency gravitational waves, with forays into electromagnetic counterparts to gravitational-wave events, such as fast radio bursts.

Mingarelli has accumulated over $1M in grants and prizes over her career from the NSF, the ERC, and Amazon. Her honors and awards include APS "Woman Physicist of the Month" for November 2016, her thesis was published in the Springer Thesis Series (2015), and grants from the Royal Astronomical Society, the UK Institute of Physics for both research and outreach, and the National Science Foundation. She has written an invited guest article for Scientific American, contributes to Amy Poehler’s Smart Girls, and regularly appears on the Science Channel's "How the Universe Works." 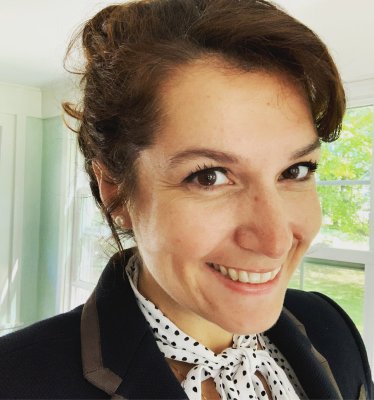 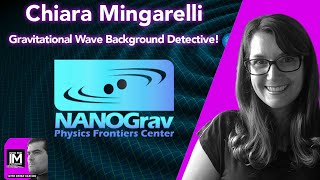 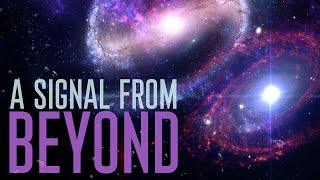 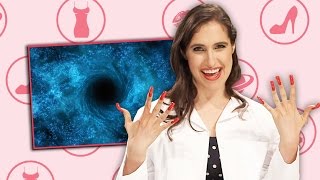 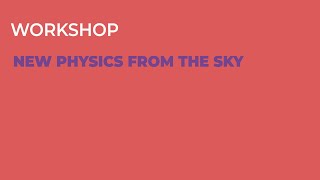 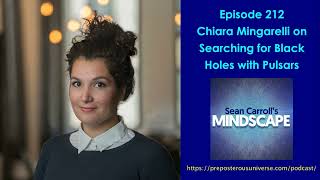 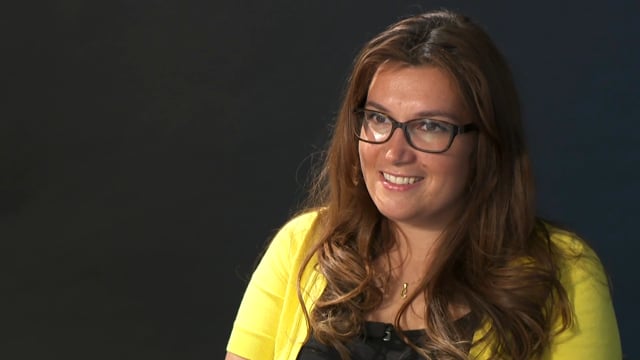 Chiara Mingarelli on Searching for Black Holes with Pulsars

The detection of gravitational waves from inspiraling black holes by the LIGO and Virgo collaborations was rightly celebrated as a landmark achievement in physics and astronomy. But ultra-precise ground-based observatories aren’t the only way to detect gravitational waves; we can also search for their imprints on the timing of signals from pulsars scattered throughout our galaxy. Chiara Mingarelli is a member of the North American Nanohertz Observatory for Gravitational Waves (NANOGrav) collaboration, which uses pulsar timing to study the universe using gravitational waves.

The image, released Thursday during simultaneous news conferences hosted by various institutions in seven countries, reveals the black hole, named Sagittarius A*, as a dark center silhouetted against a bright orange-yellow ring. Black holes by their very nature are unseeable, but their boundaries cast a shadow against the bright backdrop of hot gas and dust that encircles them. That shadow is what’s visible to certain telescopes on Earth. “I am in awe because that’s our supermassive black hole,” said University of Connecticut physicist Dr. Chiara Mingarelli, who wasn’t involved in producing the image. “It feels very personal to see it for the first time, to have that undeniable image of it.”

Scientists have not yet been able to prove the existence of these supermassive black hole mergers, or binaries. Chiara Mingarelli, assistant professor of physics, was the lead researcher on a $650,000 Collaborative Research Grant from the National Science Foundation, half of which is earmarked for UConn, to conduct an experiment to prove the existence of supermassive black hole binaries.

A Signal From Beyond

UConn astrophysicist Chiara Mingarelli is part of a team of researchers who recently published data on a hint of a signal that sent ripples of excitement through the physics community. These monumental findings are the culmination of twelve and a half years of data gathered from NANOGrav — a network of pulsars across the galaxy — all in the hopes of detecting gravitational waves.

Chiara Mingarelli, a gravitational-wave astrophysicist at the University of Connecticut, is part of the NANOGrav project, which looks for nanohertz-frequency gravitational waves via subtle variations they should induce upon the arrival times of metronomelike radio pulses from large numbers of pulsars scattered across the heavens. Such waves—which have yet to be conclusively seen via this “pulsar timing array” method—are thought to come from merging pairs of supermassive black holes. Arecibo had been monitoring half of NANOGrav’s targeted pulsars. “We can still do [pulsar timing]. It’s just that Arecibo was really good at it,” Mingarelli says. “We lost our star quarterback.”

When neutron stars collide, the mergers can sometimes be picked up by observatories that measure their light, even though the objects are really faint. When black holes collide, it’s not something we can see — until perhaps now. “It’s a weird and wonderful event, and in fact we don’t know how rare they are,” Chiara Mingarelli, an assistant professor at the University of Connecticut studying gravitational waves, who was not involved in the study, tells The Verge.

These pulsar timing arrays are based on the same principle as LIGO and Virgo. Essentially, if enough is known about each pulsar, then their signals can be predicted incredibly precisely, so if those signals are delayed by even the tiniest fraction of time, then that could indicate that a gravitational wave has rolled through. Importantly, this method could be more tuned towards lower frequency waves. "A difference between when the pulsar signals should arrive, and when they do arrive, can signal a gravitational wave," says Chiara Mingarelli, lead author of the new study. "And since the pulsars we study are about 3,000 light-years away, they act as a galactic-scale gravitational-wave detector."

Gravitational waves from the merger of black holes, neutron stars or other massive objects would produce a chirp much like the increasing pitch of a slide whistle, the researchers said. Those likely produced by supernovae or gamma ray bursts produce telltale pops and crackles. The oldest—relics of the Big Bang—simply sizzle. “Not only can we explore the universe with neutrinos and cosmic rays, see it with light across a huge range of wavelengths, but we can now hear it too with gravitational waves,” said Caltech physicist Chiara M. F. Mingarelli, who studies them. “Imagine hearing the universe for the first time.”

2022 The nanohertz gravitational wave background (GWB) is believed to be dominated by GW emission from supermassive black hole binaries (SMBHBs). Observations of several dual-active galactic nuclei (AGN) strongly suggest a link between AGN and SMBHBs, given that these dual-AGN systems will eventually form bound binary pairs. Here we develop an exploratory SMBHB population model based on empirically constrained quasar populations, allowing us to decompose the GWB amplitude into an underlying distribution of SMBH masses, SMBHB number density, and volume enclosing the GWB. Our approach also allows us to self-consistently predict the number of local SMBHB systems from the GWB amplitude. Interestingly, we find the local number density of SMBHBs implied by the common-process signal in the NANOGrav 12.5-yr data set to be roughly five times larger than previously predicted by other models. We also find that at most ∼25% of SMBHBs can be associated with quasars. Furthermore, our quasar-based approach predicts ≳95% of the GWB signal comes from z ≲ 2.5, and that SMBHBs contributing to the GWB have masses ≳108 M⊙. We also explore how different empirical galaxy–black hole scaling relations affect the local number density of GW sources, and find that relations predicting more massive black holes decrease the local number density of SMBHBs. Overall, our results point to the important role that a measurement of the GWB will play in directly constraining the cosmic population of SMBHBs, as well as their connections to quasars and galaxy mergers.

2021 Supermassive black hole binary systems (SMBHBs) emitting gravitational waves may be traced by periodic light curves. We assembled a catalog of 149 such periodic light curves, and using their masses, distances, and periods, predicted the gravitational-wave strain and detectability of each binary candidate using all-sky detection maps. We found that the International Pulsar Timing Array (IPTA) provides almost uniform sky coverage -- a unique ability of the IPTA -- and by 2025 will improve NANOGrav's current minimum detectable strain by a factor of 6, and its volume by a factor of 216. Moreover, IPTA will reach detection sensitivities for three candidates by 2025, and 13 by the end of the decade, enabling us to constrain the underlying empirical relations used to estimate SMBH masses. We find that we can in fact already constrain the mass of a binary in Mrk 504 to M

2019 In this paper we provide a comprehensive derivation of the energy density in the stochastic gravitational-wave background Ωgw(f), and show how this quantity is measured in ground-based detectors such as Laser Interferometer Gravitational-Wave Observatory (LIGO), space-based Laser Interferometer Space Antenna (LISA), and Pulsar Timing Arrays. By definition Ωgw(f)∝Sh(f) -- the power spectral density (PSD) of the Fourier modes of the gravitational-wave background. However, this is often confused with the PSD of the strain signal, which we call Sgw(f), and is a detector-dependent quantity. This has led to confusing definitions of Ωgw(f) in the literature which differ by factors of up to 5 when written in a detector-dependent way. In addition to clarifying this confusion, formulas presented in this paper facilitate easy comparison of results from different detector groups, and how to convert from one measure of the strength of the background (or an upper limit) to another. Our codes are public and on GitHub.

Supermassive black hole (SMBH) mergers are the strongest sources of gravitational-waves (GWs) in the Universe. SMBH mergers are expected to follow galaxy mergers, since likely all massive galaxies host central SMBHs (see, for example, ref. 1). Briefly, the black holes fall to the centre of the newly formed galaxy through dynamical friction and form a binary. This binary should harden by ejecting stars crossing its orbit — a process called stellar hardening. When the binary is separated by a centiparsec to a milliparsec, GWs drive the binary to merge.

The direct detection of gravitational waves by the LIGO Scientific Collaboration has opened a new window of observation on the universe. We can now explore the universe with light across the entire electromagnetic spectrum; with cosmic rays and neutrinos; and, as of last September, with gravitational waves as well. Like light, however, gravitational waves span a broad range of frequencies, and just as you cannot use an infrared telescope to observe ultraviolet light or X-rays, you cannot use LIGO to look for every kind of gravitational wave. LIGO’s detectors, with arms four km. long, saw (or rather, heard) waves generated by two merging black holes, each approximately 30 times as massive as the Sun. But for the very low frequency gravitational waves created by the merger of the million- to billion-solar-mass black holes at the centers of most galaxies, you need a detector as big as the Milky Way.