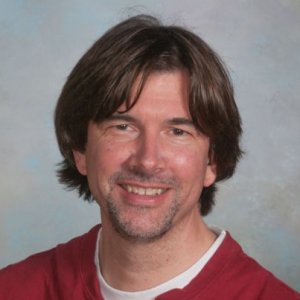 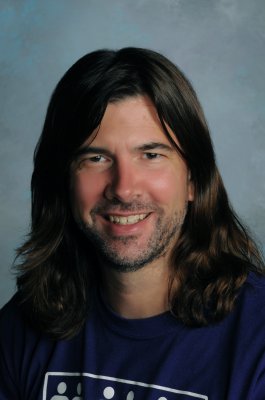 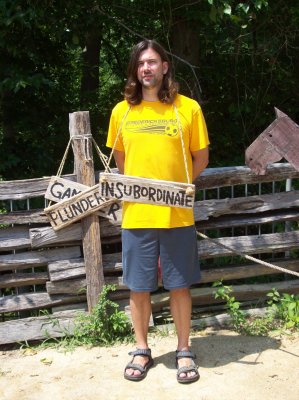 Chris Foss, Professor of English, earned a Ph.D. in 19th-century British literature from the University of Wisconsin-Madison, an M.A. in literature from Northeastern University, and a B.A. in English (with secondary education certification) and Spanish from Concordia College-Moorhead, Minn.

Dr. Foss is the author of more than 20 scholarly publications and 40 academic conference papers. His particular emphases within his specialty area include Toru Dutt, Percy Bysshe Shelley, and Oscar Wilde. He also has secondary expertise in disability studies, with an emphasis on autism studies.

His co-edited book, "Disability in Comic Books and Graphic Narratives," is scheduled for publication in Feb. 2016 with Palgrave Macmillan, an essay collection for which he also coauthored the Introduction and wrote an individual chapter titled “Reading in Pictures: Re-visioning Autism and Literature through the Medium of Manga.”

His most recent publications are “Fin-de-Siècle Indian English-Language Poetry: British Imperialism, India, and the Irish Question,” which appeared in the July 2015 number of English Literature in Transition, 1880-1920, and “Individual Redemption through Universal Design; or, How IEP Meetings Have Infused My Pedagogy with an Ethic of Care(taking),” which appeared in Caring For, Caring With: Pedagogical Responses to Living with Disabled People, the October 2015 special issue of Pedagogy: Critical Approaches to Teaching Literature, Language, Composition, and Culture.

Dr. Foss’ essay “‘He is so ugly that he might have made the King smile’: Disability and Freakery in Oscar Wilde’s ‘The Birthday of the Infanta,’” the end product of his Spring 2015 sabbatical, is currently being circulated for publication. Also, in October 2015 he accepted an invitation to join the editorial board of Journal of Literary and Cultural Disability Studies (Liverpool University Press/Project MUSE), one of the two most important venues for scholarly work in the interdisciplinary field of disability studies.

On June 23, Professor of English Chris Foss presented a paper titled “Ann Yearsley, Earl Goodwin, and the Politics of Romantic Discontent” at the 25th meeting of the British Women Writers Conference, held this year at the University of North Carolina-Chapel Hill.

On Nov. 13, Professor of English Chris Foss presented a paper titled “‘The body’s own account’: Disease, Disability, Death and the Argument for Life in the Poetry of Claudia Emerson” at the South Atlantic Modern Language Association annual convention in Durham, N.C. The paper celebrates Claudia’s unflinching consideration of disease,...

Foss Invited to Join Editorial Board

Professor of English Chris Foss recently accepted an invitation to join the editorial board of Journal of Literary and Cultural Disability Studies (Liverpool University Press/Project MUSE). The journal is one of the two most important venues for scholarly work in the interdisciplinary field of disability studies (together with Disability Studies Quarterly),...

Professor of English Chris Foss just has published an article entitled “Individual Redemption through Universal Design; or, How IEP Meetings Have Infused My Pedagogy with an Ethic of Care(taking)” in the latest number of Pedagogy: Critical Approaches to Teaching Literature, Language, Composition, and Culture. Pedagogy is published by Duke University...

Professor of English Chris Foss presented a paper, “‘He is so ugly that he might have made the King smile’: Disability and Materiality in Oscar Wilde’s ‘The Birthday of the Infanta’” at the annual meeting of the Nineteenth Century Studies Association, held this year in Boston, Massachusetts on Saturday, March 27....

On Saturday, Sept. 27, Professor of English Chris Foss presented a paper at the annual meeting of the International Conference on Romanticism, held this year in Minneapolis, Minnesota. His talk was entitled “The (Western?) Mirror and(/or?) the (Eastern?) Lamp: Romantic Reflection, Rejection, and Revision in Kasiprasad Ghosh’s The Sháïr and Other Poems.” After begging forgivene...

Chris Foss, Professor of English, recently published a chapter entitled “Building a Mystery: Relative Fear and the 1990s Autistic Thriller” in Bloomsbury Press’ Kidding Around: The Child in Film and Media, a collection of essays edited by Alexander N. Howe and Wynn Yarbrough....

One in every 150 American-born children is diagnosed with an autism-spectrum disorder. Christopher Foss (University of Mary Washington) has examined how autism is portrayed in contemporary literature and film and says it is time to re-think difference, dignity, discrimination, and other disability issues.

This book invites readers to consider both canonical and alternative graphic representations of disability. Some chapters focus on comic superheroes, from lesser-known protagonists like Cyborg and Helen Killer to classics such as Batgirl and Batman; many more explore the amazing range of graphic narratives revolving around disability, covering famous names such as Alison Bechdel and Chris Ware, as well as less familiar artists such as Keiko Tobe and Georgia Webber. The volume also offers a broad spectrum of represented disabilities: amputation, autism, blindness, deafness, depression, Huntington’s, multiple sclerosis, obsessive-compulsive disorder, speech impairment, and spinal injury. A number of the essays collected here show how comics continue to implicate themselves in the objectification and marginalization of persons with disabilities, perpetuating stale stereotypes and stigmas. At the same time, others stress how this medium simultaneously offers unique potential for transforming our understanding of disability in truly profound ways. Foss served as the lead editor for this book, wrote one of its chapters (“Reading in Pictures: Re-visioning Autism and Literature through the Medium of Manga”), and coauthored its Introduction.

In this article, Foss details how three Indian English-language poets living and publishing in India during the 1890s—Avadh Behari Lall, Aurobindo Ghose, and Romesh Chunder Dutt—wrote in support of Irish Home Rule, and how their work meaningfully counters the orientalist assumption/insistence that Indian English-language poetry limit itself to exclusively Indian contexts/foci. Such an international scope, while complementary to the more properly local focus of most Indian anti-imperialist agendas, significantly reveals the extent to which their poetry contained a cosmopolitan component that ultimately cannot be reduced to some sort of partial engagement with Irish nationalism merely as a means of co¬vertly commenting on India. Their work suggests the global reach of Indian English-language poetry, displaying a broad range of responses to the Irish Question while offering truly penetrating individual insights into the nature of imperial rule and the politics of British imperialism beyond the “borders” of the Indian subcontinent.

“Individual Redemption through Universal Design; or, How IEP Meetings Have Infused My Pedagogy with an Ethic of Care(taking).”

In this article Foss addresses how participating as a parent in the Individualized Education Program (IEP) process has helped to transform his approach to teaching by reinforcing how important it is to endorse a pedagogy that recognizes and values the individuality of students. In attempting to bring both format and delivery in line with the principles of Universal Design for Instruction, Foss relates how he has come to understand such a pedagogical orientation not simply as a generic model for “good teaching” but also more particularly as a reflection of a disability-inflected pedagogy of care(taking).

"Building a Mystery: Relative Fear and the 1990s Autistic Thriller." Kidding Around: The Child in Film and Media. Eds. Alexander N. Howe and Wynn Yarborough.

Its argument framed in relation to the Sandy Hook tragedy, this book chapter exposes how “autistic thriller” films from the 1990s predominantly employ autism as a vehicle of sensation that relies upon outdated stereotypes and perpetuates ableist attitudes. They abet the medical model of disability and its pathological construction of autism, and thus remain complicit in the continued widespread discrimination against individuals with disabilities.

Foss’s book chapter delineates how Wilde’s American lecture “The English Renaissance” establishes that, for Wilde, a properly Romantic aesthetics is antisystematic and disseminative in nature, emphasizing parody and process over self-realization and synthesis. Casting Wilde as a Romantic Ironist rather than a Romantic Egoist productively illuminates how the insincerity that for many so defines the mature Wilde actually is an extension, rather than a rejection, of the Romanticism he emphatically embraced at the beginning of his career.

"Emerging from Emergence: Towards a Rethinking of the Recovery Story in Nine Contemporary Nonfiction Autism Narratives."

This article’s thesis is that, in the first decade of the 21st century, writers of book-length accounts of living with autism spectrum disorders begin to reject the stigmatization of disability implicitly reinforced by the traditional recovery narrative and instead insist upon an acceptance of disability as human variation and difference.

"'We, who happier, live / Under the holiest dispensation': Gender, Reform, and the Nexus of East and West in Toru Dutt."

This book chapter examines the nexus of gender, reform, and religion in the nineteenth-century Indo-Anglian writer Toru Dutt, and then positions her work in relation to competing constructions of regional, national, international, and transnational space(s).

"'There is no god who can keep us from tasting': Good Cannibalism in Hélène Cixous's The Book of Promethea." Scenes of the Apple: Food and the Female Body in 19th- and 20th-Century Women's Writing.

In this book chapter I argue that images of appetite and desire, and especially of cannibalism, are not only central to an understanding of Cixous’s “novel,” but further offer essential insight into the nature of Cixous’s theoretical project in general and her notion of l’écriture feminine in particular.

"Jameson, Conrad, and the Dialectic of Utopia and Ideology."

In this article I argue (1) that one usefully may apply Fredric Jameson’s important reading of Joseph Conrad’s Nostromo in The Political Unconscious to Conrad’s Heart of Darkness as well and (2) that, when one turns this new reading of Heart of Darkness back upon Jameson’s own text, one finds that it opens up an avenue for a critique of Jameson’s whole theoretical framework.

"Toward an Imaginative Politics: The Convergence of Theory and Practice in A Philosophical View of Reform." A Brighter Morn: The Shelley Circle's Utopian Project. Ed. Darby Lewes.

In this book chapter I argue that the same dynamics of process central to Percy Bysshe Shelley’s poetics inform his political theorizing, which I insist one should see as reflecting a (self-)revisionary utopianism that is as pragmatic as it is ambitious.

"Abjection and Appropriation: Male Subjectivity in The Good Soldier."

In this article I explore how applying ideas from Julia Kristeva’s theorization of the abject to Ford Madox Ford’s The Good Soldier sheds new light on the nature of the crisis of male subjectivity common to many other texts of early 20th century male modernism—ultimately revealing how masculine fear of femininity-in-maleness is responsible for these writers’ frequent representations of male subjects who engage in a dual gesture of abjection and appropriation in an attempt to simultaneously cast off and fetishize the feminine as Other.

In this article, I apply Julia Kristeva’s theoretical argument from Revolution in Poetic Language to an analysis of Act IV of Shelley’s Prometheus Unbound in order to open up a new perspective on the crucial role Act IV plays in the overall impact of Shelley’s lyrical drama upon its readers.