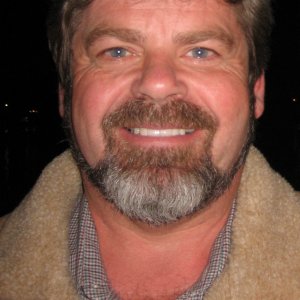 
Humorous speaker on Teenage Issues, The Modern Man, and the British Isles. Associate Trainer for "Time To Teach!"

Born in London, England in 1957, adopted as a young child by a very English father and a German mother, Chris has followed the path less traveled. Chris attended a Cathedral School, and yes, as a boy soprano he did the whole angelic child thing...

High School was where he developed his speaking skills to a high level (His report card mentions talking a great deal...) Academics took something of a back seat as the lure of amateur dramatics and the stage bought out the inner ham.

Chris attended Newcastle University, England, where as a Disc Jockey and Convener of Debates for the Student Union, he relished the multiple opportunities to use his vocal skills to supplement his meager grant.

After graduating with a psychology degree, his path led him through being a pilot and a used-car salesman, selling Real Ale and advertising, and somehow ending up as a Police Officer. After six years in uniform, during which he collected some extraordinary stories, and talked his way out of several sticky situations, Chris attended Durham University’s Teacher Training course, and found a safer way to get paid for talking, this time as an elementary school teacher.

While teaching in England, his class connected with one in the US. Naturally, this led to him visiting, meeting the class teacher, falling in love and marrying his California girl.


Chris then became an educational administrator, which gave him many opportunities over the next twenty years to address audiences from very young children to adults.
Still the educator at heart, with stand-up comic tendencies and the unique worldview afforded him by his journey, Chris would love to share his vocal talents as a speaker at your event, conference or assembly.

Teen Talk - for and About Teen Issues

Proprietary Classroom Management Program from the Center for Teacher Effectiveness.

Conversations for and about teens and the hard to understand journey to adulthood.

Do You Speak English?

A humorous guide to the dialects and accents of England.

Starting with British dentistry and moving on through driving, fishing, and an endless scource of topics from the other side of the "pond"

Hints, help, and hope for the modern man of the house, and pure entertainment for the women in our lives...