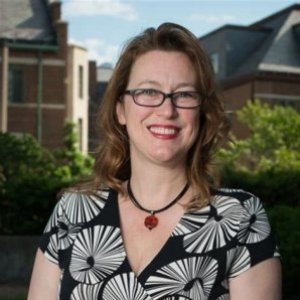 Dr. Christina DeJong, MSU associate professor in the school of criminal justice explained part of the reasons the #MeToo postings on social media went viral this week. She talked with WKAR's Brooke Allen during "Morning Edition" on October 18...

Over the past 20 years, female arrests have increased overwhelmingly. In 1993 women made up 19.7 percent of all arrests, and as of 2012 that number has jumped to 26.2 percent. Conversely, male arrests have been on the decline. In a new study analyzing years of data from the FBI's Uniform Crime Reports, Christina DeJong, a professor at the School of Criminal Justice at Michigan State University, and colleagues found that the increase of women in the criminal justice system isn't only related to an increase in female offenders...

Why victims of domestic abuse go to prison

DeJong says the justice system is chipping away at many of the gains that have been made for women’s rights since the 1970s. “One of the things I’m most concerned about is how rape and domestic assault victims are increasingly being delegitimized,” says DeJong, part of a contingent of Michigan State social scientists studying violence against women. “Many of the protections that were in place for sexual assault victims are withering, and I think a lot of it has to do with the war on women.”...

Protections for Transgender Inmates Under PREA: a Comparison of State Correctional Policies in the United States

2018 The Prison Rape Elimination Act (PREA) contains several protections for transgender inmates; specifically, that prison administration understands key definitions of “transgender,” that inmates are provided with the appropriate classification and housing, and they are kept safe from victimization by other inmates and staff. A total of ten states were found to be fully compliant by the Department of Justice deadline in 2015, but these policies are changing rapidly in the USA.

2017 Recent years have seen an increased reliance on the Thomson Reuters Journal Impact Factor (JIF) as a method of evaluating the prestige of academic journals. While the JIF has existed for many years, the increased use of technology to track publications and citations has resulted in other methods of measuring prestige, including Google Scholar’s H-index and Elsevier’s Cite Score. It is unclear, however, whether these “objective” methods of evaluation are correlated with the journals’ reputations among scholars. This paper compares objective and subjective evaluations of journals in criminal justice and criminology among a sample of ASC and ACJS members.

2014 Drawing on recent scholarship on prisoner reentry and gendered pathways to crime, this research explores how social relationships, incarceration experiences, and community context, and the intersection of these factors with race, influence the occurrence and timing of recidivism. Using a large, modern sample of women released from prison, we find that women who are drug dependent, have less education, or have more extensive criminal histories are more likely to fail on parole and to recidivate more quickly during the eight year follow‐up period. We also observe racial variation in the effect of education, drug use, and neighborhood concentrated disadvantage on recidivism. This study highlights the importance of an intra‐gender, theoretical understanding of recidivism, and has import for policy aimed at female parolees.

Can situational and structural factors differentiate between intimate partner and “other” homicide?

2011 A large body of research has identified strong and consistent correlates of aggregated intimate homicide incidents; however, the bulk of these studies focuses on the influence of either case or neighborhood characteristics on homicide types, but not both. This study examines data collected from 739 homicides in two distinct metropolitan cities to determine which factors differentiate intimate and non-intimate homicide. Findings reveal that intimate partner homicides (IPH) are more likely to involve females both as victims and offenders when compared to non-IPH incidents. In addition, IPH homicides are more likely to be committed with weapons than non-IPH, but this finding only appears in Indianapolis homicides. Indeed, one of the stark contrasts between Indianapolis and Newark was the much greater prevalence of firearms involved in IPH homicides in Indianapolis. This suggests the need for future research that sorts out patterns of household gun possession, factors influencing community levels of household gun possession, and the use of legally- or illegally-possessed firearms in IPH homicide.

2009 Drawing on recent scholarship on prisoner reentry and gendered pathways to crime, this research explores how social relationships, incarceration experiences, and community context, and the intersection of these factors with race, influence the occurrence and timing of recidivism. Using a large, modern sample of women released from prison, we find that women who are drug dependent, have less education, or have more extensive criminal histories are more likely to fail on parole and to recidivate more quickly during the eight year follow‐up period.

2008 This article explores police officer perceptions of intimate partner violence (IPV) using observational data from police ride-alongs. We performed a qualitative analysis of narrative data from the Project on Policing Neighborhoods (POPN) to examine officers’ views of IPV as well as whether policing philosophy is related to officers’ attitudes toward IPV. Results indicate that POPN officers expressed problematic views of IPV (including simplification of IPV, victim blaming, patriarchal attitudes toward women, and presumption of victim noncooperation) as well as progressive views of IPV (including recognition of the complexity of IPV, awareness of barriers to leaving, and consideration of IPV as serious and worthy of police intervention). Additionally, our analysis offers tentative support for a relationship between policing philosophy and officers’ attitudes toward IPV. While this study is largely exploratory, we address the implications of our findings both for police practice and training and for future research.

2008 Historically, research on gender differences in police work has focused on whether women can “hold their own” in the male-dominated profession of policing. This body of research has undergone a shift from examining whether women can do the job, to how women do the job differently. This topic is intertwined with the increased use of community policing and recognition of the importance of officers having strong “people” skills and the ability to work with citizens.

2006 This study uses survival analysis to test propositions from specific deterrence theory. It examines the effect of a custodial sentence on time until rearrest, generally and under various conditions. Results suggest that for those with few ties to conventional society and for first‐time arrestees, a sentence of incarceration increases the probability of rearrest. However, for arrestees with few ties and for experienced offenders, longer incarceration predicts longer time until rearrest.