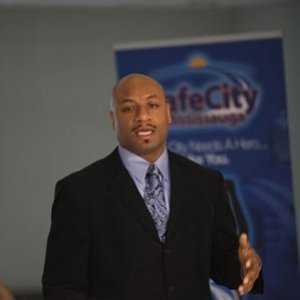 A Detroit native Chuck Winters has dedicated his life to athletic excellence, leadership and philanthropy. Chuck Winters grew up in the tough Herman Garden projects of Detroit, Michigan. In 1992, Chuck escaped the vicious cycle of violence in his hometown, to graduate with a four year degree and participate in sports at the University of Michigan. In athletics’, there isn’t much Chuck hasn’t done: he’s played in the Little League World Series, completed a brilliant high school football and baseball career making various All-State and All-American teams, he was drafted in the 6th round by the Kansas City Royals out of high school, he won an award as the Big Ten’s Best two sport star in 1996, had a career as a four year letter winner in football and Baseball at the University of Michigan, played in the Arena Football League and for the Toronto Argonauts. Yet despite his incredible athletic and educational prowess, Chuck has learned to give back to the community through leadership and service

University of Michigan: Bachelor of Science in Kinesiology , Education 1997

We are a large school in a neighborhood struggling with gang violence. Our school is in the Malvern area of Scarborough. When I first contacted Mr. Winters about the program, I warned him that we were a tough school and that I was worried about "assembly manners". I knew the program would be great for our community, but I did not want to be disrespectful to Mr. Winters (who was more than willing to come out despite my apprehension). Mr. Winters was extremely well received! The students were very interested and attentive to his message. Chuck was very willing to talk one-on-one with students afterwards and stayed much longer than he had to sign autographs. In fact, a lot of students had Mr. Winters sign the back of their I.D. cards that they must wear on lanyards - it is great to see so many students wearing #32 and Mr. Winters name as a reminder of the assembly

Today was a special day for the players, parents and staff of Scarborough Thunder Football team, as we celebrated the end of a good year and gave awards out to our player. Today, was even more special, as Mr. Winters, brought the room to new heights with his empowering, heart warming presentation, it was just what we all needed to hear. Mr. Winters, thank you for coming out so early on a Sunday morning to spend time with a group you had not met before. You are now an honorary member of Scarborough Thunder and a part of the family. Please feel free to come see us anytime.

Mr. Winters you were fabulous at the LOVE event - your words captured the student audience in such a special way. Words can't express how your presence leaves kids inspired. Thank you very much

Please accept this letter as a reference for Chuck Winters. I have known and worked with Chuck for 3 years through my employment with the Government of Ontario. Chuck is an exceptionally powerful, creative and dynamic speaker. A very charismatic individual, Chuck’s style is mesmerizing and he has the ability to hold the crowd in rapt attention, both within small group and large group settings. Comments that I have received from others who have attended one of Chuck’s presentations have included: • I found this presentation to be very inspirational and it was a good idea to have someone to focus on our individual responsibility to be the best that we can be • Dynamic, relevant! • Well connected to what we do! • Excellent motivation; very good choice of speaker • On the mark! Consistent with our way of conducting business • Excellent presenter and good exercises • Powerful and engaging • Chuck hit all the right points and was able to engage the audience • Excellent—would love to have speaker on local level Throughout the course of our association, Chuck has consistently demonstrated a strong dedication and commitment to serving people. He has exceptional leadership qualities, and an innate ability to relate to others. He displays a tremendous sense of caring and empathy, easily engaging with both individuals and groups. Chuck’s interpersonal style contributes to the high esteem in which others hold him. In the time I have known Chuck, he has always been a very trustworthy, responsible, respectful and ethical individual. He demonstrates a high degree of personal integrity and is truly dedicated to helping others and his community.

Mr. Winters, On behalf of the high school students and teachers who attended the 3rd Annual Student Leadership Conference on at Paradise Banquet and Convention Centre, as well as the management team at the Student Leadership Institute, I would like to thank you for taking the time to prepare such an insightful workshop. There were over 500 people at this year's conference, and each year it keeps getting bigger and better. I am pleased to acknowledge that you played a major role in the success of the conference.

Mr. Winters, Your keynote address at the inaugural MYAC Youth Summit was certainly inspiring and the verbal and written feedback we received from the students and faculty present was overwhelming. Your positive message about making the right choices in life and living a life of character, with respect for ourselves and others was very meaningful and I admire the way in which you live your life by not focusing on your fame and success but striving for a life of significance, based on a foundation of strong faith, which is most encouraging. You are a wonderful ambassador for the Toronto Argonauts and they are fortunate to have such a committed and thoughtful individual representing them.

This letter is written to acknowledge the volunteer contributions and accomplishments of Charles Winters. Charles became involved in the Toronto Argonauts Mentorship Program when the program was developed in 2006. This group consisted of members of the Toronto Argonauts football team speaking to youth in custody with an emphasis on mentorship, rehabilitation and pro-social change. Involvement was on a volunteer basis and took place in a small group format. Charles was one of the initial mentors chosen due to his passion for working with young people and his exemplary history of volunteer work in the community. Charles took part in initial training with clinicians at Sprucedale Youth Centre on group dynamics and mentoring young people. Once the group started, Charles quickly excelled and became a leader amongst the other players. He showed genuine concern and caring for the youth involved and quickly established positive relationships. Charles was able to speak about his own life and the adversity he had faced. Many of the challenges that Charles had faced were similar to those that the youth had encountered, which gave him credibility with the youth. Charles’ non-threatening and non-judgmental demeanor invited the participants to share their own stories and struggles. Charles talked openly about how he had made positive changes in his life, and helped youth problem solve and also strive for positive change. Charles also showed great variety in his approach. For example, he often built relationships by engaging in sports with the youth, taking time to speak with youth on an individual basis and sharing his passion for music. Charles was able to respect appropriate boundaries in his relationships with youth, and was always keen to learn and improve on his skills.

Chuck has spoken to over 200 schools and over 75,000 students between the ages of 6 and 18. As a member of our Huddle up Bullying prevention assembly circuit, Chuck made an incredible impact on the lives of children across the Greater Toronto Area. Chuck has an amazing ability to alter his messaging to accommodate his audience. Chuck is one of the most effective speakers I have worked with and I would not hesitate to recommend him for any speaking engagement.

Mr. Charles “Chuck” Winters I would like to thank Mr. Winters and recognize the outstanding presentation he delivered at the 2011 Michigan Student Financial Aid Association (MSFAA) Summer Training Conference this past July. Mr. Winters has found his niche in his ability to deliver a heart gripping story in a profound, interactive and humorous way. Throughout his presentation, Mr. Winters interacted with the audience; no standing behind a podium for Chuck! Mr. Winters was in the audience, engaging attendees and enticing participation, putting smiles on faces yet delivering a message that will make everyone in the audience stop and think. His enthusiasm for motivating others, for delivering a message of hope which he did so strategically by having us all travel the journey through a walk in his shoes, regardless if they were “miss-matched” is simply inspiring. Mr. Winters helps to re-instill faith in mankind and reminds us to rely on love, family and believe in one another. You cannot help but feel the need to stop, think and act after hearing his presentation. His collegiate years at the University of Michigan and his time as an Arena Football player have helped lend to his character, charisma and most importantly his story; that of a young man, filled with challenges, hopes, dreams and putting believe in others! On behalf of MSFAA I would like to thank Mr. Winters for his outstanding and often humorous presentation! Keep the faith and keep inspiring Chuck!

Chuck Winters is one of the few “true” role models of our time. He is a consummate example of a man who has beaten the odds and risen out of poverty and now dedicates his energy and resources to help others.

The Mask You Live In (Panel Discussion)  Downtown Toronto

EQUAL ARE WE CONFERENCE  Cambridge, Ontario

Treat people as you would like to be Treated  St. Joseph Catholic Elementary School

The Man or The Other Man

White Ribbon is the world’s largest movement of men and boys working to end violence against women and girls, promote gender equity, healthy relationships and a new vision of masculinity. Starting in 1991, we asked men to wear white ribbons as a pledge to never commit, condone or remain silent about violence against women and girls. Since then the White Ribbon has spread to over 60 countries around the world.

The Toronto Argonauts’ Huddle Up Bullying Prevention Program, presented by Tim Hortons, is an all encompassing opportunity for a school population to focus on the impact they can have on bullying and mental health in their environment. The program sees Toronto Argonauts players, cheerleaders, program staff and the Canadian Safe School Network working together to make schools safe. September 2015 will mark the 15th Anniversary of the Huddle Up Program, and its continued growth in popularity. Designed for students in grades 3 to 12, Huddle Up sees Toronto Argonaut Players, Cheerleaders, and program staff, working together to powerfully support and covey our bullying prevention messages for targets, bystanders and bullies. The Huddle Up Bullying Prevention program is comprised of three core components: •Leadership Committee Meeting •Player Assembly •Student Committee Summit