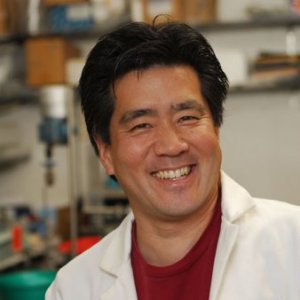 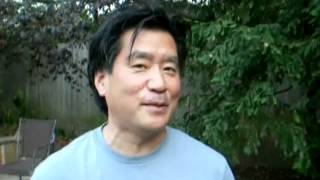 Curtis T. Okamoto received his Ph.D. in physiology from the University of California, Berkeley, in the laboratory of John G. Forte, Ph.D. He received his post-doctoral training at the University of California, San Francisco, in the laboratory of Keith E. Mostov, M.D., Ph.D. He is currently an Associate Professor in the Department of Pharmacology and Pharmaceutical Sciences at USC.

2019 Aim: Secretion of proteins into basal tears of Parkinson’s disease (PD) patients may be altered by changes in nerve function. Materials & methods: Oligomeric α-SynOligo and total α-SynTotal, CCL-2, DJ-1, LF and MMP-9 were measured in basal tears from 93 PD patients and 82 age- and sex-equivalent healthy controls. Results: α-SynTotal was decreased (p = 0.0043), whereas α-SynOligo (p < 0.0001) and the ratio of α-SynOligo/α-SynTotal (p < 0.0001) were increased in basal tears from PD patients compared with healthy controls. Area under receiver-operating curves of α-SynOligo and α-SynOligo/α-SynTotal contents were 0.70 (95% confidence limits: 0.621–0.774) and 0.72 (95% confidence limits: 0.642–0.792). Conclusion: PD patient basal tears may contain biomarkers that can be assayed noninvasively and inexpensively.

2019 Objective: To evaluate whether the protein composition of reflex tears differs in individuals with Parkinson’s disease (PD) versus Healthy Controls (HC).

Exploring the functional role of Nlrp12’s interaction with Hck

2019 The members of the family of Nucleotide-binding oligomerization domain-Like Receptor proteins (NLR) are composed of a N-terminal domain, a central nucleotide-binding domain, and a C-terminal ligand-binding domain. They are generally known to be involved in regulating NF-kB pathway. A yeast two-hybrid screen was performed with the pyrin plus nucleotide binding domain of NLR family pyrin domain-containing12 protein (Nlrp12) as a bait and human leucocyte proteins a prey. It revealed that Hck, a src non-receptor tyrosine kinase family member was the top hit. Further experiments confirmed that: 1) the C-terminal 40 amino acids of Hck specifically binds to Nlrp12’s pyrin plus nucleotide binding domains; 2) the last 30 amino acids of Hck is sufficient to bind to Nlrp12’s pyrin plus nucleotide binding domains, but neither to Nlrp12’s pyrin domain alone nor Nlrp12’s nucleotide-binding domain alone; and, 3) the last 40 amino acids of dephosphorylated, but not phosphorylated, Hck preferentially binds to full-length Nlrp12. Nlrp12 co-immunoprecipitated with Hck when both are heterologously overexpressed in 293T cells. Using the same system, Nlrp12 and Hck are co-localized by immunofluorescence. In addition, in Raw 264.7, U937, and THP-1 cells, endogenous Hck co-immunoprecipitated with transfected Nlrp12. Since Csk is a tyrosine kinase of members of the src family that specifically binds to the tyrosine negative regulatory residue at the C-terminal of src family kinases and phosphorylates Hck to inactivate it in mammalian cells, it is hypothesized that Nlrp12 competes with Csk binding to Hck, thereby activating Hck. Since Nlrp12 also inhibits the NF-kB pathway, an alternative hypothesis is that Hck rescues cells from Nlrp12’s inhibition of NF-kB activity. An NF-kB luciferase assay confirmed that overexpression of Hck alone does not inhibit NF-kB, but overexpression of Hck plus Nlrp12 rescued Nlrp12’s inhibition of the NF-kB pathway.

2018 The dynamic manipulation of kinases remains a major obstacle to unraveling cell-signaling networks responsible for the activation of biological systems. For example, epidermal growth factor (EGF) stimulates the epidermal growth factor receptor (EGFR/ErbB1); however, EGF also recruits other kinases (HER2/ErbB2) involved with various signaling pathways. To better study EGFR we report a new strategy to selectively activate receptor tyrosine kinases fused to elastin-like polypeptides (ELPs), which can be visualized inside mammalian cells using fixed and live-cell fluorescence microscopy. ELPs are high molecular weight polypeptides that phase separate abruptly upon heating. When an EGFR-ELP fusion is heated, it clusters, initiates receptor internalization, phosphorylates, initiates downstream kinase signaling, and undergoes retrograde transport towards the cell body. Unlike other strategies to block EGFR (small molecule inhibitors, RNAi, or transcriptional regulators), EGFR-ELP clustering can be specifically switched on or off within minutes. Live-cell imaging suggests that EGFR-ELPs assemble in most cells with only a 3 °C increase in temperature. This strategy was found reversible and able to dynamically control the downstream phosphorylation/activation of the ERK1/2 pathway. For the first time, this strategy enables the rational engineering of specific temperature-sensitive receptors that may have broad applications in the study and manipulation of biological processes.

2018 Objective: To evaluate whether the tear fluid of people with Parkinson’s disease (PD) differs compared to people without PD.