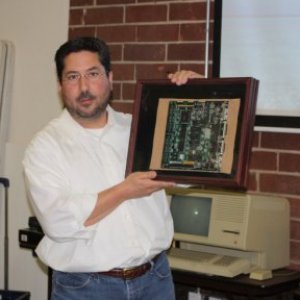 I am a Computer Historian; a professional computer industry historian. I believe that I am as qualified and as "real" a Computer Historian as any other person today who might state that they are. I don't have a college degree in computer history, but as far as I can tell, there is not such a thing. I have been reading and studying computer history now for well over twenty years. I estimate that I have read no less than sixty books on the subject, not counting textbooks, magazines, audiobooks, online articles, plus interviews, videos and other ephemera. I have roughly eighty computer history books and a hundred or so related magazines in my personal library. It's an interesting parallel too, that the earliest computer scientists, engineers and programmers did not graduate from a formal computer science curriculum, but rather were mostly electrical engineers. Many were later pulled from other disciplines like Art, Economics, History, English (languages), Philosophy, Sociology and others.

In 1992, I founded the Historical Computer Society and then went on to publish nine issues of "Historically Brewed," a newsletter or "zine" of computer history nostalgia. More recently, I published all of those zines in a book, and I included my story. I started the Atlanta Historical Computing Society in late 2010. Currently, I am the Director of the upcoming Vintage Computer Festival Southeast 1.0. I also blog and produce podcasts on computer history nostalgia. I have been a contributor to forbes.com, businessinsider.com, cultofmac.com, macobserver.com and others. I have given numerous presentations to user groups, and more recently to the Vintage Computer Festival Midwest and KansasFest.

"A master's degree is an academic degree granted to individuals who have undergone study demonstrating a mastery or high-order overview of a specific field of study or area of professional practice. Within the area studied, graduates are posited to possess advanced knowledge of a specialized body of theoretical and applied topics; high order skills in analysis, critical evaluation or professional application; and the ability to solve complex problems and think rigorously and independently."