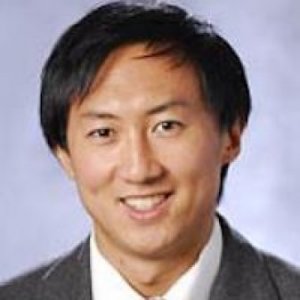 
David Hu's research focuses on fundamental problems of hydrodynamics and elasticity that have bearing on problems in biology. 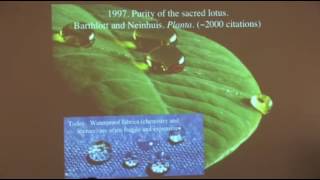 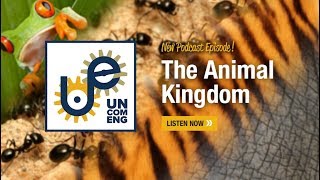 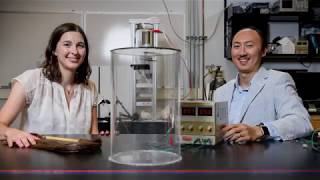 David Hu started at Georgia Tech in late summer 2008 as an Assistant Professor of Mechanical Engineering; he holds a joint appointment in the Department of Biology. Prior, from 2005 to 2008, he was an Instructor of Mathematics at Courant Institute of New York University. He was promoted to full Professor in 2019.

Dr. David Hu's research focuses on fundamental problems of hydrodynamics and elasticity that have bearing on problems in biology. He is interested in the dynamics of interfaces, specifically those associated with fluid-solid and solid-solid interactions. The techniques used in his work include theory, computation, and experiment. He is also interested in pursuing biomimetic technologies based on nature's designs.

Recently, he has become interested in the dynamics arising from the interaction of flexible textured surfaces. All terrestrial locomotion is accomplished by increasing friction in some areas and decreasing it in others. There has been much work on locomotion by considering the rigid-body dynamics of bodies with smooth surfaces (e.g., passive walkers, bicycle dynamics; Ruina 2007). There is even a great deal of knowledge of the motion of rigid devices over compliant terrain such as snow or mud (terramechanics, tank treads; Muro and O'Brien 1989). However, little is known about how optimal propulsion is obtained with when both surfaces are flexible or compliant. This is an important area because flexible surfaces provide means to modulate friction in ways rigid surfaces cannot. We have begun to explore this area by a combined experimental and theoretical investigation of snake propulsion.

Water striders are insects that support their weight by surface tension and propel themselves by sculling with their hydrophobic legs. Previous investigators assumed that the hydrodynamic propulsion of the water strider relies on momentum transfer by surface waves. Our flow-visualization experiments reveal that the strider transfers momentum to the underlying fluid not primarily through capillary waves, but rather through hemispherical vortices shed by its driving legs.

David Hu, a mechanical engineer at Georgia Tech who often studies animal movements but was not involved in this research, said the paper was “full of surprises,” such as the latch: “It’s a soft latch, composed of thousands of microscopic parts, that can shoot a soft larva like its being shot out of a cannon...”

Georgia Tech scientists figured out how maggots can eat so much, so fast

Shishkov's advisor is David Hu, who runs a biolocomotion laboratory at the Georgia Institute of Technology studying how various creatures move. He is perhaps best known for his work with fire ants, but his lab also studies cat tongues, water striders, snakes, various climbing insects, mosquitos, and, of course, black soldier fly larvae...

The Mysteries of Animal Movement

David Hu was changing his infant son’s diaper when he got the idea for a study that eventually won him the Ig Nobel prize. No, not the Nobel Prize — the Ig Nobel prize, which bills itself as a reward for “achievements that make people laugh, then think.”...

How Animals Use Their Tails to Swish and Swat Away Insects

“Most people assume that animals use their tails to swat at bugs, but we wanted to know how they do it,” said David Hu, the Georgia Tech professor who supervised the study. “They basically have two methods of attack: the swish and swat.” ...

How the Elephant Uses its Trunk to Eat

A wild African elephant eats rapidly, consuming 190 grams of food a minute, to provide adequate fuel for its vast bulk. “Elephants are in a rush when they are eating,” said David L. Hu, associate professor in the School of Mechanical Engineering and the School of Biology at the Georgia Institute of Technology. The elephant diet consists of large volumes of plant materials such as leaves, fruit and roots. To eat these, elephants sweep loose items into a pile and crush them into a manageable solid that can be picked up by the trunk...

2019 Aquatic chemical sensors, as any other surface submerged in water, are subject to biofouling, by bacteria and algae that quickly form biofilms on the submerged surface [1]. In the case of sensors, accumulated biofilms skew the chemical measurements until the sensors are cleaned and recalibrated. A number of mechanical and chemical solutions have been proposed to scrape off or kill the biofilms, but they can be sensor-specific, costly, or have adverse effects on the environment [2]. The process of biofouling happens over the span of days, making long-term chemical measurements labor-intensive and oftentimes unfeasible.

2019 It is common knowledge that dogs have a keen sense of smell. Many people have sought to capitalize on such outstanding olfactory sense by using canines with the special forces, as drug detecting tools, and for medical diagnosis. Small mammals such as mice have been shown to quickly learn how to almost perfectly discriminate between two presented odors. On the other size extreme, elephants are extremely adept with their olfactory system and are being used to detect substances at low concentration such as TNT. A key component to the mammalian sense of smell at all size scales is the dynamic sniff cycle. While there has been work done to discover the airflow patterns inside mammalian nasal cavities, little is known of the fluid mechanics of gathering and concentrating odors onto sensors.

2019 Thousands of black soldier larvae hatch simultaneously from eggs laid within rotting vegetation or animal carcasses. Over the next few weeks, they grow while compressed by both their surroundings and each other. When compressed, these larvae rearrange to reduce the forces upon them. How quickly can larvae rearrange, and what final state do they choose? In this experimental study, we use a universal testing machine to conduct creep tests on larvae, squeezing them to set volume fractions and measuring the time course of their reaction force. Live larvae come to pressure equilibrium ten times faster than dead larvae, indicating that their small movements can rearrange them faster than just settling. The relaxation of dead larvae is well described by stretched exponentials, which also characterize hierarchical self-avoiding materials such as polymers or balls of crumpled aluminum foil