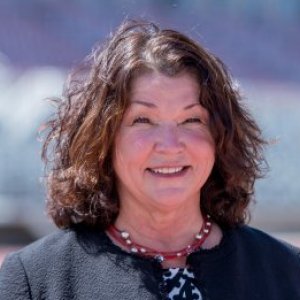 Debbie Corum is the Athletic Director at Southern Utah University and provides leadership and direction for all programs and functions of the Athletics Department. Previous to filling the position, she served as the Senior Associate Athletic Director/Senior Woman Administrator (SWA) at SUU.

As a 30 year veteran of intercollegiate athletics, Corum served at UConn, Louisiana State, Stanford and in a wide variety of high profile national leadership positions including Chair of the American Athletic Conference SWA Committee, the NCAA Division I Women’s Basketball Committee, the National Association of Collegiate Women Athletics Administrators (NACWAA) Board of Directors, the AAC Strategic Planning Task Force, Advisory Board of the US Coast Guard Academy LeadHERship Symposium, the AAC Athletics Director’s Executive Committee, and Board of Directors of WeCOACH, an organization to educate and empower female coaches.

Corum earned her bachelor of science degree in psychology and education from Vanderbilt University. Fast-Paced Change for the NCAA 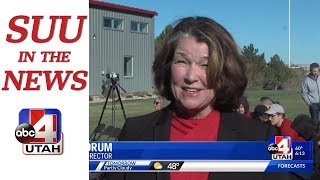 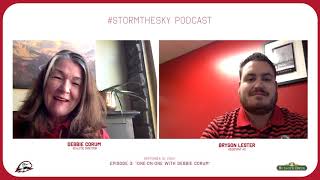 “I think what makes this so difficult is that it cuts to the heart of what amateurism is,” said Debbie Corum, the A.D. at Southern Utah University in Cedar City. She added the NCAA’s rules could have ramifications that spread into Olympic sports, high school sports and beyond.

"As an administration we are always looking for ways to raise the profile of the department, and partnering with Van Wagner provides one of the best opportunities we have to do just that," Southern Utah University Athletic Director Debbie Corum said.

“When I was growing up, there were no women in college athletics,” Corum said. “The best you could do, if you were athletic minded, was to coach high school. My whole dream growing up was to become a teacher and a high school coach.” Corum achieved far beyond her dreams. When she was hired as SUU’s Athletic Director in November 2017, she was the first ever female athletic director hired in Utah.

It’s been over two years since Debbie Corum left the University of Connecticut athletic department to take a job at a little-known university out West. She was named Southern Utah University's interim athletic director a year after starting, and about six months ago the qualifying tag was removed. And now, this is home.

"The President of our University used to actually be a prosecutor for sexual assault. This was very near and dear to his heart and he wanted to have this type of education on our campus," said Debbie Corum, SUU Athletic Director and Deputy Title IV Coordinator.

“Coach Warren is a fantastic football coach, a positive role model, and a huge asset to this University,” SUU Athletic Director Debbie Corum said in a news release. “It is with a great deal of happiness that we announce that he will continue to lead the program into the future as we continue to build the athletic footprint of Southern Utah University.”

After serving for five months as Southern Utah University’s interim athletic director, Debbie Corum has been given the job permanently. With her new, permanent job title, Corum becomes the first female athletic director in the state of Utah at the Division I level, joining 35 other female ADs nationally.

“This year was filled with successful accomplishments both on and off the fields of play. Academically, student-athletes achieved in the classroom better than the student body at large and set the bar for continued high expectations. Athletically, we witnessed improvement in many of our sports and celebrated with athletes as they reached team and personal goals,” interim athletic director Debbie Corum said. “I am so proud to be a part of this group of student-athletes, and I hope you will join me in celebrating their achievements.”

For the better part of three decades, Corum’s traveled the country rubbing shoulders with some of the best minds of collegiate athletics. She’s seen how some of the best lead departments and teams and thought of ways she would do it herself. Corum, who was named SUU’s interim athletic director on Tuesday after Jason Butikofer resigned to accept a job at Purdue, now gets to put some of those ideas into practice. And she’s hoping it will be for longer than just an interim basis.

In Butikofer's two years at SUU, he oversaw two conference championship teams (football and men’s cross country, both in 2015), hired seven new coaches and reorganized the SUU booster club into the Thunderbird Athletic Foundation. “We are going to really miss him,” Corum said. “It’s not just what he has done as far as the work, but he’s been an empowering leader for us. He’s motivated us, he’s pushed us, but, also, I just love his personality. It’s sad for us, but I think with the way things are going on the national scene and knowing what Jason’s aspirations are, this is a really great step for him.”