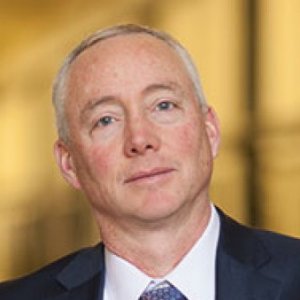 
Dennis Whyte is an expert in fusion research using the magnetic confinement of plasmas for energy production.

Dennis Whyte is a recognized leader in the field of fusion research using the magnetic confinement of plasmas for energy production on a faster, smaller, and more innovative path. He is a Fellow of the American Physical Society, has over 300 publications, and is heavily involved as an educator. He is widely recognized for his themes of innovation and the need for speed and economic viability in fusion. He has served on panels for the National Academies, the U.S. government, and the Royal Society. The core of the MIT fusion project, SPARC, was formed over eight years ago during an NSE design class led by Whyte to challenge assumptions in fusion. Many of the ideas underpinning the high-field approach — including the use of HTS for high-field, demountable magnets, liquid blankets, and ARC — have been conceived of or significantly advanced in these courses.

At the event, titled “The MIT Fusion Landscape,” speakers explained why fusion power is urgently needed, and described the approach MIT and CFS are taking and how the project is taking shape. According to Dennis Whyte, head of MIT’s Plasma Science and Fusion Center (PSFC), the new project’s aim is “to try to get to fusion energy a lot faster,” by creating a prototype fusion device with a net power output within the next 15 years. This timeframe is necessary to address “the greatest challenge we have now, which is climate change”...

PSFC Director Dennis Whyte observed that the new center is a recognition of the HEDP division’s excellence. Thanking the team for the exceptional work, under the encouragement of the senior leadership, he said, “Your work is one of the gems of the PSFC. This division produces outstanding, unique science, and with a mission that is critical to national security”...

2015 Measurements of impurities in Alcator C-Mod indicate that in the pedestal region, significant poloidal asymmetries can exist in the impurity density, ion temperature, and main ion density. In light of the observation that ion temperature and electrostatic potential are not constant on a flux surface [Theiler et al., Nucl. Fusion 54, 083017 (2014)], a technique based on total pressure conservation to align profiles measured at separate poloidal locations is presented and applied. Gyrokinetic neoclassical simulations with XGCa support the observed large poloidal variations in ion temperature and density, and that the total pressure is approximately constant on a flux surface. With the updated alignment technique, the observed in-out asymmetry in impurity density is reduced from previous publishing [Churchill et al., Nucl. Fusion 53, 122002 (2013)], but remains substantial (nz,H/nz,L∼6). Candidate asymmetry drivers are explored, showing that neither non-uniform impurity sources nor localized fluctuation-driven transport are able to explain satisfactorily the impurity density asymmetry. Since impurity density asymmetries are only present in plasmas with strong electron density gradients, and radial transport timescales become comparable to parallel transport timescales in the pedestal region, it is suggested that global transport effects relating to the strong electron density gradients in the pedestal are the main driver for the pedestal in-out impurity density asymmetry.

2015 Parametric decay instabilities (PDI) appear to be an ubiquitous feature of lower hybrid current drive (LHCD) experiments at high density. In density ramp experiments in Alcator C-Mod and other machines the onset of PDI activity has been well correlated with a decrease in current drive efficiency and production of fast electron bremsstrahlung. However whether PDI is the primary cause of the 'density limit', and if so by exactly what mechanism (beyond the obvious one of pump depletion) has not been clearly established. In order to further understand the connection, the frequency spectrum of PDI activity occurring during Alcator C-Mod LHCD experiments has been explored in detail by means of a number of RF probes distributed around the periphery of the C-Mod tokamak including a probe imbedded in the inner wall. The results show that (i) the excited spectra consists mainly of a few discrete ion cyclotron (IC) quasi-modes, which have higher growth than the ion sound branch; (ii) PDI activity can begin either at the inner or outer wall, depending on magnetic configuration; (iii) the frequencies of the IC quasi-modes correspond to the magnetic field strength close to the low-field side (LFS) or high-field side separatrix; and (iv) although PDI activity may initiate near the inner separatrix, the loss in fast electron bremsstrahlung is best correlated with the appearance of IC quasi-modes characteristic of the magnetic field strength near the LFS separatrix. These data, supported by growth rate calculations, point to the importance of the LFS scrape-off layer (SOL) density in determining PDI onset and degradation in current drive efficiency. By minimizing the SOL density it is possible to extend the core density regime over which PDI can be avoided, thus potentially maximizing the effectiveness of LHCD at high density. Increased current drive efficiency at high density has been achieved in FTU and EAST through lithium coating and special fuelling methods, and in recent C-Mod experiments by operating at higher plasma current. Another approach would be to locate the launcher in the inner wall with double null operation. This would reduce the SOL density by an order of magnitude or more and greatly mitigate the effects of PDI as well as other parasitic losses.

2014 Several high-priority near-term potential research activities to address fusion nuclear science challenges are summarized. General recommendations include: (1) Research should be preferentially focused on the most technologically advanced options (i.e., options that have been developed at least through the single-effects concept exploration stage, technology readiness levels >3), (2) Significant near-term progress can be achieved by modifying existing facilities and/or moderate investment in new medium-scale facilities, and (3) Computational modeling for fusion nuclear sciences is generally not yet sufficiently robust to enable truly predictive results to be obtained, but large reductions in risk, cost and schedule can be achieved by careful integration of experiment and modeling.

Reduction of core turbulence in I-mode plasmas in Alcator C-Mod,

2014 In this paper, we report observations of reduced core (0.40 < ρ < 0.95) fluctuations in the edge localized mode (ELM)-free high-confinement regime, I-mode, at Alcator C-Mod (Marmar et al2009 Nucl. Fusion 49 104014). Long wavelength (kθρs < 0.5) density fluctuation levels are observed to decrease from L-mode levels by up to 30% in I-mode, while long wavelength (kθρs < 0.3) electron temperature fluctuation levels are observed to decrease by up to 70% in I-mode. This reduction in core turbulence is correlated with the increases in confinement in I-mode compared to L-mode. As the pedestal temperature increases across the L–I transition, core density fluctuations (0.40 < ρ < 0.95) are reduced prior to the onset of the edge-localized (ρ ~ 0.99–1.0) weakly coherent mode (WCM) and prior to the reduction of low-frequency (ρ ~ 0.99–1.0) turbulence in the edge/pedestal region. This result helps add to our understanding of the dynamics of confinement transitions such as I-mode and H-mode, where changes in edge turbulence are more typically observed to occur prior to changes in core turbulence.

2014 I-mode is a high-performance tokamak regime characterized by the formation of a temperature pedestal and enhanced energy confinement, without an accompanying density pedestal or drop in particle and impurity transport. I-mode operation appears to have naturally occurring suppression of large Edge-Localized Modes (ELMs) in addition to its highly favorable scalings of pedestal structure and overall performance. Extensive study of the ELMy H-mode has led to the development of the EPED model, which utilizes calculations of coupled peeling-ballooning MHD modes and kinetic-ballooning mode (KBM) stability limits to predict the pedestal structure preceding an ELM crash. We apply similar tools to the structure and ELM stability of I-mode pedestals. Analysis of I-mode discharges prepared with high-resolution pedestal data from the most recent C-Mod campaign reveals favorable pedestal scalings for extrapolation to large machines—pedestal temperature scales strongly with power per particle Pnet/n⎯⎯e, and likewise pedestal pressure scales as the net heating power (consistent with weak degradation of confinement with heating power). Matched discharges in current, field, and shaping demonstrate the decoupling of energy and particle transport in I-mode, increasing fueling to span nearly a factor of two in density while maintaining matched temperature pedestals with consistent levels of Pnet/n⎯⎯e. This is consistent with targets for increased performance in I-mode, elevating pedestal βp and global performance with matched increases in density and heating power. MHD calculations using the ELITE code indicate that I-mode pedestals are strongly stable to edge peeling-ballooning instabilities. Likewise, numerical modeling of the KBM turbulence onset, as well as scalings of the pedestal width with poloidal beta, indicates that I-mode pedestals are not limited by KBM turbulence—both features identified with the trigger for large ELMs, consistent with the observed suppression of large ELMs in I-mode.