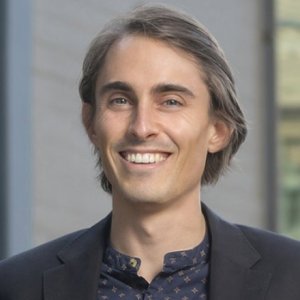 Douglas Guilbeault is an Assistant Professor in the Management of Organizations Group at the Haas School of Business. He studies how communication networks underlie the production and diffusion of cultural content, such as linguistic categories and social norms. This investigation extends to how communication dynamics are shaped by various sources of influence, such as organizational culture, political messaging, and the design of social media platforms. His work on these topics has appeared in a number of top journals, including Nature Communications, The Proceedings of the National Academy of the Sciences, and Management Science, as well as in popular news outlets, such as The Atlantic, Wired, and The Harvard Business Review. Guilbeault’s work has received top research awards from The International Conference on Computational Social Science, The Cognitive Science Society, and The International Communication Association. Guilbeault has also worked as a consultant on social media policy and people analytics for leading tech companies (e.g., Google and Facebook). His current research is funded by Facebook and the NIH.

2018 The Network Dynamics of Interdisciplinary Research. The Institute for Research on Innovation and Science, The University of Michigan. ($15,000)

2018 What should we do about Political Automation? Challenges for Policy and Research. Communication & Technology Division, The International Communication Association, Prague, March. w. Robert Gorwa.

Want to go viral? Influencers won’t be much help if you’re trying to spread a complex idea

Marketing and public relations gospel has long banked on the idea that simply reaching the well-connected people at the centers of social networks will create success. If you can just get your brilliant innovation to Kevin Bacon, then virality and riches will follow, right? Wrong, say social network researchers at the University California Berkeley and the University of Pennsylvania, who have found that influencers are rather impotent when it comes to changing the behavior and beliefs of others, and might be detrimental to some messaging.

The people who spread new and controversial ideas—changes in diet, exercise routine, political leaning, or even attitudes about vaccination—may not be the Kim Kardashians and Paris Hiltons. According to a recent study in Nature Communications, those with the most actual influence are often on the periphery of the social network. Coauthor and computational sociologist Douglas Guilbeault says that what makes these people special is that they are embedded in a tight-knit group with many connections to other tight-knit groups, even if each individual has fewer contacts than the most popular or famous person in the network.

Medical bias can be deadly. Our research found a way to curb it.

Ask most any woman about her experience with the American healthcare system and you will likely hear stories of medical maltreatment in the form of dismissal, undertreatment or incorrect diagnosis. Add racial bias to the mix and a woman’s likelihood of being victimized in medicine is even worse.

Why independent cultures think alike when it comes to categories: It's not in the brain

Imagine you gave the exact same art pieces to two different groups of people and asked them to curate an art show. The art is radical and new. The groups never speak with one another, and they organize and plan all the installations independently. On opening night, imagine your surprise when the two art shows are nearly identical. How did these groups categorize and organize all the art the same way when they never spoke with one another?

How seeing a political logo can impair your understanding of facts

Merely seeing these political and social labels can cause you to reject facts that you would otherwise support, according to a study published by Guilbeault et al. on Monday in the Proceedings of the National Academies of Science.

Regulating Bots on Social Media Is Easier Said Than Done

A bot is an automated software program that does something. Beyond this rudimentary description, bots vary tremendously. As Robert Gorwa and Douglas Guilbeault’s helpful typology of bots shows, a social media account could have automated components but retain some degree of human control, creating a sort of cyborg bot (a “cybot”).

Analysis of computational propaganda in the 2016 U.S. presidential election reveals the reach of bots

Tinder nightmares: the promise and peril of political bots

In the days leading up to the UK’s general election, youths looking for love online encountered a whole new kind of Tinder nightmare. A group of young activists built a Tinder chatbot to co-opt profiles and persuade swing voters to support Labour. The bot accounts sent 30,000-40,000 messages to targeted 18-25 year olds in battleground constituencies like Dudley North, which Labour ended up winning by only 22 votes.

Did social media help make 2016 one of the nastiest campaign seasons ever? In part yes, due to the nature of social networks.

There is power in numbers, or so the saying goes. But statistics mean different things to different people. Take Donald Trump and Hillary Clinton, for instance. Last week, the conservative political commentator Scottie Nell Hughes summed up the relative value of digits in a conversation with Anderson Cooper. “The only place that we’re hearing that Donald Trump honestly is losing is in the media or these polls,” she said. “You’re not seeing it with the crowd rallies, you’re not seeing it on social media—where Donald Trump is two to three times more popular than Hillary Clinton on every social media platform.”

Measuring Stereotypes in Online Images and their Impact on Recommendation Algorithms

Topological Measures for Identifying and Predicting the Spread of Complex Contagions

Some Questions Benefit from Group Discussion. Others Don’t.

Social learning and partisan bias in the interpretation of climate trends

Proceedings of the National Academy of the Sciences

Unpacking the Social Media Bot: A Typology to Guide Research and Policy