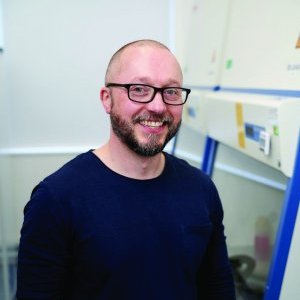 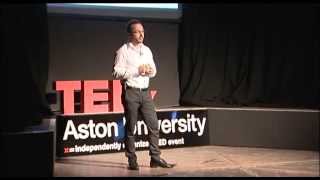 Dr Eric Hill's research interests include the development of tissue engineering strategies to model stem cell behaviour in the development of neuronal networks and also during neurodegeneration. He is currently engaged in developing stem cell derived models of the CNS in an attempt to study complex cellular interactions that occur in development and disease.

Scientists are working to combine the powers of the human brain with artificial intelligence to produce a revolutionary new class of data processor by growing brain cells on a microchip.

It’s really exciting because it allows us to study cells with genetic mutations that are patient specific. We can get a much better picture of what is actually happening in the brains of these patients. We can now generate all the different cell types found in the human brain and understand how they function together and map the changes that result in disease.

Dr Eric Hill, Programme Director for MSc Stem cells and Regenerative Medicine at Aston University, said: “This research carries the potential to enable us to recreate brain structures in a dish. This will allow us to understand how brain networks form during development and provide tools that will help us understand how these networks are affected in diseases such as Alzheimer’s disease.”

Meso-Brain sounds a bit like a soup you really don’t want to order. In fact, it’s an intriguing new project taking place at Aston University in the U.K., which just received 3.3 million euros in funding from the European Commission’s Future and Emerging Technology (FET) scheme.

Dr Eric Hill, Programme Director for MSc Stem cells and Regenerative Medicine at Aston University, commented: “This research carries the potential to enable us to recreate brain structures in a dish. This will allow us to understand how brain networks form during development and provide tools that will help us understand how these networks are affected in diseases such as Alzheimer’s disease.”

Dr Eric Hill, Programme Director for MSc Stem cells and Regenerative Medicine at Aston University, commented: "This research carries the potential to enable us to recreate brain structures in a dish. This will allow us to understand how brain networks form during development and provide tools that will help us understand how these networks are affected in diseases such as Alzheimer's disease."

2020 Recent progress in the field of human induced pluripotent stem cells (iPSCs) has led to the efficient production of human neuronal cell models for in vitro study. This has the potential to enable the understanding of live human cellular and network function which is otherwise not possible. However, a major challenge is the generation of reproducible neural networks together with the ability to interrogate and record at the single cell level. A promising aid is the use of biomaterial scaffolds that would enable the development and guidance of neuronal networks in physiologically relevant architectures and dimensionality. The optimal scaffold material would need to be precisely fabricated with submicron resolution, be optically transparent, and biocompatible.

2019 The inter-cellular propagation of tau aggregates in several neurodegenerative diseases involves, in part, recurring cycles of extracellular tau uptake, initiation of endogenous tau aggregation, and extracellular release of at least part of this protein complex. However, human brain tau extracts from diverse tauopathies exhibit variant or “strain” specificity in inducing inter-cellular propagation in both cell and animal models. It is unclear if these distinctive properties are affected by disease-specific differences in aggregated tau conformation and structure.

Preparation of stable tau oligomers for cellular and biochemical studies

2019 Increasing evidence suggests that small oligomers are the principal neurotoxic species of tau in Alzheimer's disease and other tauopathies. However, mechanisms of tau oligomer-mediated neurodegeneration are poorly understood. The transience of oligomers due to aggregation can compromise the stability of oligomers prepared in vitro. Consequently, we sought to develop an efficient method which maintains the stability and globular conformation of preformed oligomers.

A closer look at neuron interaction with track-etched microporous membranes

2018 Microporous membranes support the growth of neurites into and through micro-channels, providing a different type of neural growth platform to conventional dish cultures. Microporous membranes are used to support various types of culture, however, the role of pore diameter in relation to neurite growth through the membrane has not been well characterised. In this study, the human cell line (SH-SY5Y) was differentiated into neuron-like cells and cultured on track-etched microporous membranes with pore and channel diameters selected to accommodate neurite width (0.8 µm to 5 µm).

2018 Aquaporins are membrane proteins that regulate cellular water flow. Recently, aquaporins have been proposed as mediators of cancer cell biology. A subset of aquaporins, referred to as aquaglyceroporins are known to facilitate the transport of glycerol. The present study describes the effect of gene knockdown of the aquaglyceroporin AQP3 on MDA‑MB‑231 breast cancer cell proliferation, migration, invasion, adherence and response to the chemotherapeutic agent 5‑fluorouracil. shRNA mediated AQP3 gene knockdown induced a 28% reduction in cellular proliferation (P