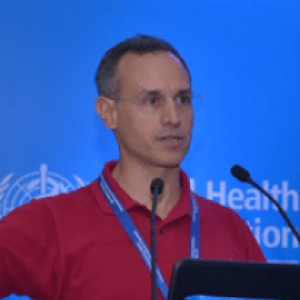 Physician, specialist in Internal Medicine, and Master in Medical Sciences.

Dr. Hugo Lopez-Gatell is a Mexican physician, specialist in Internal Medicine, and Master in Medical Sciences. He earned the degree of Doctor of Philosophy at the Department of Epidemiology of The Johns Hopkins Bloomberg School of Public Health.

Dr. Lopez-Gatell is currently Director of Innovation on Infectious Disease Surveillance and Control at the National Institute of Public Health in Cuernavaca, Mexico.

Before, he was Assistant Director General of Epidemiology at the Mexican Ministry of Health (2008 - 2012). In this capacity, Dr. Lopez-Gatell led the National Epidemiologic Surveillance System in Mexico and served as the National Focal Point for the International Health Regulations. He also was Deputy Director for Clinical Research, Attending Clinician at the Department of Medicine, and Consulting Clinician of the Traveller Medicine Clinic all at The National Institute of Medical Sciences and Nutrition, in Mexico City.

Besides his academic and public health positions he was member of the Commission of Health of the Ibero-American Program for Science and Technology (CYTED, 2008 - 2010) and since 2007 he is Member of the Board of Directors of Migrant Clinicians, Inc.

Severe Respiratory Disease Concurrent with the Circulation of H1N1 Influenza

2009 In the spring of 2009, an outbreak of severe pneumonia was reported in conjunction with the concurrent isolation of a novel swine-origin influenza A (H1N1) virus (S-OIV), widely known as swine flu, in Mexico. Influenza A (H1N1) subtype viruses have rarely predominated since the 1957 pandemic. The analysis of epidemic pneumonia in the absence of routine diagnostic tests can provide information about risk factors for severe disease from this virus and prospects for its control.

2009 Since its identification in April 2009, an A(H1N1) virus containing a unique combination of gene segments from both North American and Eurasian swine lineages has continued to circulate in humans. The lack of similarity between the 2009 A(H1N1) virus and its nearest relatives indicates that its gene segments have been circulating undetected for an extended period. Its low genetic diversity suggests that the introduction into humans was a single event or multiple events of similar viruses. Molecular markers predictive of adaptation to humans are not currently present in 2009 A(H1N1) viruses, suggesting that previously unrecognized molecular determinants could be responsible for the transmission among humans. Antigenically the viruses are homogeneous and similar to North American swine A(H1N1) viruses but distinct from seasonal human A(H1N1).

Pandemic Potential of a Strain of Influenza A (H1N1): Early Findings

2009 A novel influenza A (H1N1) virus has spread rapidly across the globe. Judging its pandemic potential is difficult with limited data, but nevertheless essential to inform appropriate health responses. By analyzing the outbreak in Mexico, early data on international spread, and viral genetic diversity, we make an early assessment of transmissibility and severity. Our estimates suggest that 23,000 (range 6000 to 32,000) individuals had been infected in Mexico by late April, giving an estimated case fatality ratio (CFR) of 0.4% (range: 0.3 to 1.8%) based on confirmed and suspected deaths reported to that time. In a community outbreak in the small community of La Gloria, Veracruz, no deaths were attributed to infection, giving an upper 95% bound on CFR of 0.6%. Thus, although substantial uncertainty remains, clinical severity appears less than that seen in the 1918 influenza pandemic but comparable with that seen in the 1957 pandemic. Clinical attack rates in children in La Gloria were twice that in adults (

2009 This report updates a previous report on the influenza A (H1N1) outbreak in Mexico and summarizes public health actions taken to date by Mexico to monitor and control the outbreak.