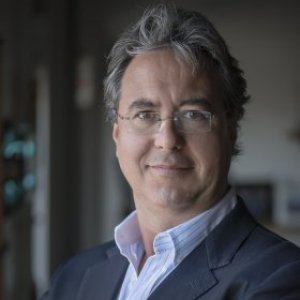 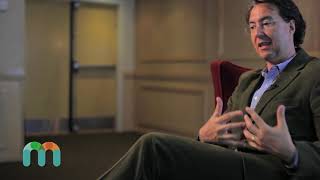 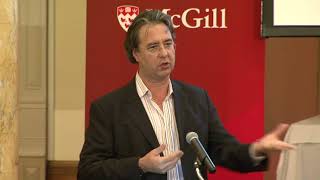 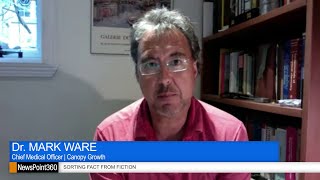 Dr. Ware is Canopy Growth’s Chief Medical Officer and leads its medical division, Spectrum Therapeutics. Activities that Dr. Ware oversees include the production and distribution of full-spectrum and single cannabinoid medical cannabis products; industry-leading education, resources and support for patients and healthcare practitioners; and pre-clinical and clinical research including the development of validated cannabinoid-based medicines.

He is an Associate Professor in Family Medicine and Anesthesia at McGill University and over the past 10 years he has served as the Director of Clinical Research of the Alan Edwards Pain Management Unit at the McGill University Health Centre, and Executive Director of the non-profit Canadian Consortium for the Investigation of Cannabinoids.

A family physician by training, Dr. Ware continues to practice pain medicine at the Montreal General Hospital and at a public interdisciplinary primary care pain clinic he established on the West Island of Montreal. His research has focused on the safety, efficacy and effectiveness of cannabis and cannabinoids in pain and symptom management.

Dr. Ware is a graduate of the University of the West Indies, and worked at the MRC Sickle Cell Unit in Kingston, Jamaica from 1996-1998 where he developed his interests in pain management and cannabis therapeutics. He moved to McGill University to begin his program of cannabis research in 1999.

Dr. Ware has acted as an advisor on medical cannabis policy to the Canadian government since 2001, and served as Vice Chair of the Federal Task Force on the Legalization and Regulation of Cannabis in Canada in 2016.

The University of the West Indies, Mona: MBBS, Medicine and Surgery 1992

Ware was the vice-chair of a federal task force that studied the legalization of marijuana in Canada. The task force report has been the blueprint for legislation now before the Senate that would legalize recreational marijuana across the country. Medical marijuana is already legal for patients with medical authorization...

Doctors call for more education when it comes to prescribing cannabis

Legalization has sparked a boom in pot research, generating funding, jobs and the need for laboratory space. In the past, companies had little incentive to study an illicit substance, now they're racing to create new products and prove their benefits.

2014 Neuropathic pain (NeP), redefined as pain caused by a lesion or a disease of the somatosensory system, is a disabling condition that affects approximately two million Canadians.

2013 Quantitative sensory testing (QST) is a psychophysical method used to quantify somatosensory function in response to controlled stimuli in healthy subjects and patients. Although QST shares similarities with the quantitative assessment of hearing or vision, which is extensively used in clinical practice and research, it has not gained a large acceptance among clinicians for many reasons, and in significant part because of the lack of information about standards for performing QST, its potential utility, and interpretation of results. A consensus meeting was convened by the Neuropathic Pain Special Interest Group of the International Association for the Study of Pain (NeuPSIG) to formulate recommendations for conducting QST in clinical practice and research. Research studies have confirmed the utility of QST for the assessment and monitoring of somatosensory deficits, particularly in diabetic and small fiber neuropathies; the assessment of evoked pains (mechanical and thermal allodynia or hyperalgesia); and the diagnosis of sensory neuropathies. Promising applications include the assessment of evoked pains in large-scale clinical trials and the study of conditioned pain modulation. In clinical practice, we recommend the use QST for screening for small and large fiber neuropathies; monitoring of somatosensory deficits; and monitoring of evoked pains, allodynia, and hyperalgesia. QST is not recommended as a stand-alone test for the diagnosis of neuropathic pain. For the conduct of QST in healthy subjects and in patients, we recommend use of predefined standardized stimuli and instructions, validated algorithms of testing, and reference values corrected for anatomical site, age, and gender. Interpretation of results should always take into account the clinical context, and patients with language and cognitive difficulties, anxiety, or litigation should not be considered eligible for QST. When appropriate standards, as discussed here, are applied, QST can provide important and unique information about the functional status of somatosensory system, which would be complementary to already existing clinical methods.

2011 Chronic pain is associated with reduced brain gray matter and impaired cognitive ability. In this longitudinal study, we assessed whether neuroanatomical and functional abnormalities were reversible and dependent on treatment outcomes. We acquired MRI scans from chronic low back pain (CLBP) patients before (n = 18) and 6 months after (spine surgery or facet joint injections; n = 14) treatment. In addition, we scanned 16 healthy controls, 10 of which returned 6 months after the first visit. We performed cortical thickness analysis on structural MRI scans, and subjects performed a cognitive task during the functional MRI. We compared patients and controls, as well as patients before versus after treatment. After treatment, patients had increased cortical thickness in the left dorsolateral prefrontal cortex (DLPFC), which was thinner before treatment compared with controls. Increased DLPFC thickness correlated with the reduction of both pain and physical disability. Additionally, increased thickness in primary motor cortex was associated specifically with reduced physical disability, and right anterior insula was associated specifically with reduced pain. Left DLPFC activity during an attention-demanding cognitive task was abnormal before treatment, but normalized following treatment. These data indicate that functional and structural brain abnormalities—specifically in the left DLPFC—are reversible, suggesting that treating chronic pain can restore normal brain function in humans.

2007 Neuropathic pain (NeP), generated by disorders of the peripheral and central nervous system, can be particularly severe and disabling. Prevalence estimates indicate that 2% to 3% of the population in the developed world suffer from NeP, which suggests that up to one million Canadians have this disabling condition. Evidence-based guidelines for the pharmacological management of NeP are therefore urgently needed. Randomized, controlled trials, systematic reviews and existing guidelines focusing on the pharmacological management of NeP were evaluated at a consensus meeting. Medications are recommended in the guidelines if their analgesic efficacy was supported by at least one methodologically sound, randomized, controlled trial showing significant benefit relative to placebo or another relevant control group. Recommendations for treatment are based on degree of evidence of analgesic efficacy, safety, ease of use and cost-effectiveness. Analgesic agents recommended for first-line treatments are certain antidepressants (tricyclics) and anticonvulsants (gabapentin and pregabalin). Second-line treatments recommended are serotonin noradrenaline reuptake inhibitors and topical lidocaine. Tramadol and controlled-release opioid analgesics are recommended as third-line treatments for moderate to severe pain. Recommended fourth-line treatments include cannabinoids, methadone and anticonvulsants with lesser evidence of efficacy, such as lamotrigine, topiramate and valproic acid. Treatment must be individualized for each patient based on efficacy, side-effect profile and drug accessibility, including cost. Further studies are required to examine head-to-head comparisons among analgesics, combinations of analgesics, long-term outcomes, and treatment of pediatric and central NeP.