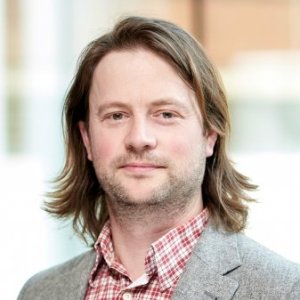 Peter Lewis is a member of the Aston Lab for Intelligent Collectives Engineering (ALICE).

Peter Lewis is a Senior Lecturer (Associate Professor) in Computer Science at Aston University in Birmingham, England. He is a member of the Aston Lab for Intelligent Collectives Engineering (ALICE).

Peter's research is often inspired by biological, social and psychological processes, and advances our understanding about how to build intelligent systems that are embedded in society, learning and adapting on an ongoing basis. His most significant contributions are to the field of self-aware computing, including co-editing the foundational book Self-aware Computing Systems: An Engineering Approach, in 2016. He is particularly interested in the evolution of self-awareness and intentional action in a social context. Through ongoing industrial research collaborations, Peter's work has been applied in areas such as smart camera networks, mobile computing, vehicle fleet management, steel manufacturing, interactive music devices, and cloud computing. His research has been featured in global press, including the BBC, Daily Mail (UK), Hindustan Times (India), and Global Times (China).

Peter is Director of the Think Beyond Data initiative, part-funded by the European Regional Development Fund, that provides an artificial intelligence R&D capability to businesses across the Midlands of England. He is an Associate Editor of IEEE Technology & Society Magazine, and a Steering Committee member for the IEEE International Conference on Autonomic Computing and Self-Organizing Systems.

Peter co-founded Beautiful Canoe, a student social enterprise whose vision is to develop the technology leaders of the future, and delivers bespoke software for a range of clients in the public, private and third sectors. Beautiful Canoe has recently been recognised by the UK national Institute of Coding as a model for student enterprises across the country.

Dr. Peter Lewis, Aston University said: "By instrumenting mobile apps and using optimisation algorithms to search for eﬃcient app conﬁgurations, the tools identify the most power-hungry parts of a mobile app and move them to the cloud. And since our framework is general-purpose, it can be applied to any mobile app."

Dr. Peter Lewis of Aston University said: "By instrumenting mobile apps and using optimisation algorithms to search for efficient app configurations, the tools identify the most power-hungry parts of a mobile app and move them to the cloud. And since our framework is general-purpose, it can be applied to any mobile app."

Scientists improve smart phone battery life by up to 60 percent

Dr. Peter Lewis, Aston University said: "By instrumenting mobile apps and using optimisation algorithms to search for eﬃcient app conﬁgurations, the tools identify the most power-hungry parts of a mobile app and move them to the cloud. And since our framework is general-purpose, it can be applied to any mobile app."

Systems that pursue their own goals in shared environments can indirectly affect one another in unanticipated ways, such that the actions of other systems can interfere with goal-achievement. As humans have evolved to achieve goals despite interference from others in society, we thus endow socially situated agents with the capacity for social action as a means of mitigating interference in co-existing systems.

Evolving agents to learn how to solve complex, multi-stage tasks to achieve a goal is a challenging problem. Problems such as the River Crossing Task are used to explore how these agents evolve and what they learn, but it is still often difficult to explain why agents behave in the way they do. We present the Minimal River Crossing (RC-) Task testbed, designed to reduce the complexity of the original River Crossing Task while keeping its essential components, such that the fundamental learning challenges it presents can be understood in more detail.

Introduction to the Special Issue on Self-Aware Cyber-physical Systems

A cyber-physical system (CPS) forms the borderline between the physical world in all its diversity and complexity, and the world of information processing that models the physical world, comprehends and predicts it for ultimately controlling it. CPSs, just like the physical world itself, are distributed, but where the data analysis, processing, computing, and control should take place remains a question that every application has to address for itself to find a reasonable solution that depends on physical distances, complexity of the task, requirements on response time, safety, security, and privacy considerations.

This brief paper is about trust. It explores the phenomenon from various angles, with the implicit assumptions that trust can be measured in some ways, that trust can be compared and rated, and that trust is of worth when we consider entities from data, through artificial intelligences, to humans, with side trips along the way to animals. It explores trust systems and trust empowerment as opposed to trust enforcement, the creation of trust models, applications of trust, and the reasons why trust is of worth.

In this article, we explore the online multiobject k‐coverage problem in visual sensor networks. This problem combines k‐coverage and the cooperative multirobot observation of multiple moving targets problem, and thereby captures key features of rapidly deployed camera networks, including redundancy and team‐based tracking of evasive or unpredictable targets. The benefits of using mobile cameras are demonstrated and we explore the balance of autonomy between cameras generating new subgoals, and those responders able to fulfill them.