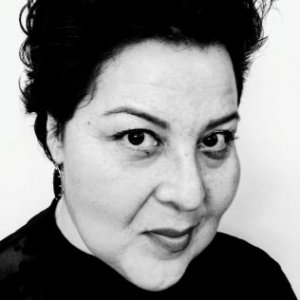 Eliza Rodriguez y Gibson is Associate Professor of Chicana/o and Latina/o Studies at LMU and coauthor of Funny Looking: Humor, Queer Latina/o Camp, and Ugly Betty. She is the editor of Stunned Into Being: Essays on the Poetry of Lorna Dee Cervantes and coeditor of The Un/making of Latina/o Citizenship: Culture, Politics, and Aesthetics. Her latest book project, Style, Aesthetics, and the Body: Chicana/o/x Cultural Production and the Making of Latinidad examines the way style and aesthetics work on the body to create individual and collective forms of subjectivity, paying particular to the way Chicana/o/x cultural production works to articulate an expansive Latinidad. The book takes up four radically different sites: Chicana neoindigenous iconography, Latina/o/x fan subcultures, literary style, and contestations of national identity through style in fat vanity and fine art photography. Her most recent publications include the essay “Chicana and Latina Embodied Poetics and Literary Responses to Violence” written for the volume Gender and American Literature and Culture as part of a new series published by Cambridge University Press and “I Love You Like Chicanos Love Morrissey”: Affect, World-making, and Latinidad,” which can be found in ASAP 4.1