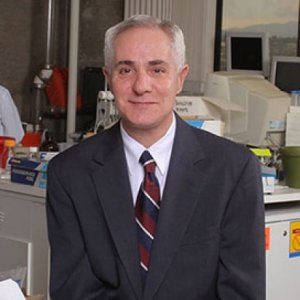 Enrique Cadenas, MD, PhD, researches the molecular mechanisms inherent in brain aging and Alzheimer’s disease under an umbrella that characterizes and evaluates quantitatively the decline in energy metabolism associated with brain aging and age-related neurodegenerative diseases by addressing the coordinated regulation of signaling and transcriptional pathways and mitochondrial function. This coordinated triad is critical in the regulation of brain glucose uptake and metabolism. This platform has been used to assess the therapeutic potential of several nutritional approaches that restore mitochondrial function and the associated signaling and transcriptional pathways as well as cognition (evaluated as long-term potentiation).

Cadenas’ lab has ample expertise on mitochondrial bioenergetics, dynamics, and biogenesis, redox signaling, and redox modulation of transcriptional pathways as well as free radical biology and nitric oxide biology inherent in aging and age-related neurodegenerative disorders. In addition, his laboratory is engaged in the analyses of protein post-translational modifications associated with modulation of cell signaling as well as the ability to assemble and integrate comprehensively mitochondrial physiology and cell signaling- and transcriptional pathways.

Cadenas also collaborates extensively with international investigators focusing on modulation of nitric oxide concentration dynamics following hippocampal neuronal glutamatergic activation and hippocampal mitochondrial dysfunction in aging. This is part of a research program with the University of Coimbra, Portugal, that addresses the significance and regulation of the neurovascular-metabolic coupling axis in brain aging and Alzheimer’s disease.

USC Professors Kelvin J. A. Davies and Enrique Cadenas have been named officers of France’s National Order of Merit, a prestigious award and honor bestowed by the president of France that recognizes their contributions and service to science, international cooperation and France.

2018 Insulin resistance–as observed in aging, diabetes, obesity, and other pathophysiological situations, affects brain function, for insulin signaling is responsible for neuronal glucose transport and control of energy homeostasis and is involved in the regulation of neuronal growth and synaptic plasticity. This study investigates brain metabolism and function in a liver-specific Phosphatase and Tensin Homologue (Pten) knockout mouse model (Liver-PtenKO), a negative regulator of insulin signaling. The Liver-PtenKO mouse model showed an increased flux of glucose into the liver–thus resulting in an overall hypoglycemic and hypoinsulinemic state–and significantly lower hepatic production of the ketone body beta-hydroxybutyrate (as compared with age-matched control mice). The Liver-PtenKO mice exhibited increased brain glucose uptake, improved rate of glycolysis and flux of metabolites in the TCA cycle, and improved synaptic plasticity in the hippocampus. Brain slices from both control- and Liver-PtenKO mice responded to the addition of insulin (in terms of pAKT/AKT levels), thereby neglecting an insulin resistance scenario. This study underscores the significance of insulin signaling in brain bioenergetics and function and helps recognize deficits in diseases associated with insulin resistance.

2018 A decrease in energy metabolism is associated with brain aging, which was assessed in terms of a coordinated metabolic triad encompassed by mitochondria, insulin signaling (IIS), and JNT ((c-Jun N-terminal kinase) signaling. Impairment of these coordinated responses leads to the cognitive decline that occurs with aging and neurodegenerative disorders. The complexity of the antagonism and cross-talk between IIS- and JNT (signaling and how they converge on mitochondrial function underscores the significance of an insulin resistance state. The hypometabolic state inherent in brain aging, a mouse model of Alzheimer's disease, and high-fat diet-induced obesity was accompanied by decreased brain glucose uptake, an imbalance between IIS- and JNT (signaling, decreased rate of glycolysis and flux of metabolites to the TCA cycle, and diminished synaptic plasticity. These effects are not cell specific, for astrocytes developed an age-dependent energy phenotype (increased mitochondrial oxidative metabolism and biogenesis) and augmented responses to inflammatory cytokines. In most of the models described above, the hypometabolic state was rescued by treatment with lipoic acid, likely through a thiol/disulfide mechanism, which resulted largely in improved IIS and in synaptic plasticity.

2018 Objective: In this study we use the CAG140 HD mouse model, chosen for its slow progression with motor symptoms emerging at 12 months of age and provide evidence of the benefits of long-term treadmill running.

The Oxygen Paradox, the French Paradox, and age-related diseases

2017 A paradox is a seemingly absurd or impossible concept, proposition, or theory that is often difficult to understand or explain, sometimes apparently self-contradictory, and yet ultimately correct or true. How is it possible, for example, that oxygen “a toxic environmental poison” could be also indispensable for life (Beckman and Ames Physiol Rev 78(2):547–81, 1998; Stadtman and Berlett Chem Res Toxicol 10(5):485–94, 1997)?: the so-called Oxygen Paradox (Davies and Ursini 1995; Davies Biochem Soc Symp 61:1–31, 1995). How can French people apparently disregard the rule that high dietary intakes of cholesterol and saturated fats (e.g., cheese and paté) will result in an early death from cardiovascular diseases (Renaud and de Lorgeril Lancet 339(8808):1523–6, 1992; Catalgol et al. Front Pharmacol 3:141, 2012; Eisenberg et al. Nat Med 22(12):1428–1438, 2016)?: the so-called, French Paradox. Doubtless, the truth is not a duality and epistemological bias probably generates apparently self-contradictory conclusions. Perhaps nowhere in biology are there so many apparently contradictory views, and even experimental results, affecting human physiology and pathology as in the fields of free radicals and oxidative stress, antioxidants, foods and drinks, and dietary recommendations; this is particularly true when issues such as disease-susceptibility or avoidance, “healthspan,” “lifespan,” and ageing are involved. Consider, for example, the apparently paradoxical observation that treatment with low doses of a substance that is toxic at high concentrations may actually induce transient adaptations that protect against a subsequent exposure to the same (or similar) toxin. This particular paradox is now mechanistically explained as “Adaptive Homeostasis” (Davies Mol Asp Med 49:1–7, 2016; Pomatto et al. 2017a; Lomeli et al. Clin Sci (Lond) 131(21):2573–2599, 2017; Pomatto and Davies 2017); the non-damaging process by which an apparent toxicant can activate biological signal transduction pathways to increase expression of protective genes, by mechanisms that are completely different from those by which the same agent induces toxicity at high concentrations. In this review, we explore the influences and effects of paradoxes such as the Oxygen Paradox and the French Paradox on the etiology, progression, and outcomes of many of the major human age-related diseases, as well as the basic biological phenomenon of ageing itself.

Effects of Lipoic Acid on High-Fat Diet-Induced Alteration of Synaptic Plasticity and Brain Glucose Metabolism: A PET/CT and 13C-NMR Study

2017 High-fat diet (HFD)-induced obesity is accompanied by insulin resistance and compromised brain synaptic plasticity through the impairment of insulin-sensitive pathways regulating neuronal survival, learning, and memory. Lipoic acid is known to modulate the redox status of the cell and has insulin mimetic effects. This study was aimed at determining the effects of dietary administration of lipoic acid on a HFD-induced obesity model in terms of (a) insulin signaling, (b) brain glucose uptake and neuronal- and astrocytic metabolism, and (c) synaptic plasticity. 3-Month old C57BL/6J mice were divided into 4 groups exposed to their respective treatments for 9 weeks: (1) normal diet, (2) normal diet plus lipoic acid, (3) HFD, and (4) HFD plus lipoic acid. HFD resulted in higher body weight, development of insulin resistance, lower brain glucose uptake and glucose transporters, alterations in glycolytic and acetate metabolism in neurons and astrocytes, and ultimately synaptic plasticity loss evident by a decreased long-term potentiation (LTP). Lipoic acid treatment in mice on HFD prevented several HFD-induced metabolic changes and preserved synaptic plasticity. The metabolic and physiological changes in HFD-fed mice, including insulin resistance, brain glucose uptake and metabolism, and synaptic function, could be preserved by the insulin-like effect of lipoic acid.