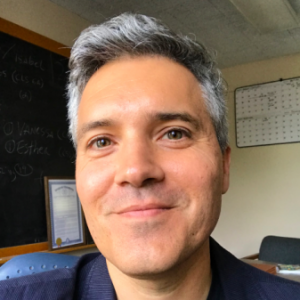 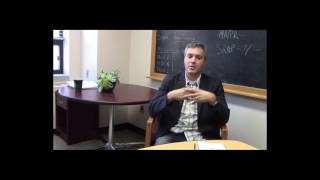 Eric Juenke comes to MSU from the University of Colorado at Boulder. He earned his Ph.D from Texas A&M University in 2005. He specializes in minority politics, U.S. electoral institutions, state and local elections, legislative and bureaucratic minority representation, Latino politics, black politics, and democratic theory. Eric serves in a joint appointment between the Department of Political Science and the Department of Chicano and Latino Studies.

Winner of the CQ Press Award

2011 Awarded for the best paper on legislative studies presented at the 2011 American Political Science Association meeting: “An Indelible Imprint? Assessing the Evolution of Racial Politics in Shaping Conflict in Congress During the Civil Rights Era.” With Michael Brady and Daniel Lee.

Eric Gonzalez Juenke has been named director of the Michigan State University Chicano/Latino Studies Program, in the College of Social Science. Juenke is an associate professor in the Department of Political Science. Prior to joining the faculty at MSU, he worked at the University of Colorado in Boulder. He earned his doctorate from Texas A&M University...

Too few minority politicians? You can't win if you don't run

A number of recent articles on candidate supply suggest the latter is true. For example, Eric Gonzalez Juenke of Michigan State University analyzednearly 10,000 statehouse elections in 2000 and 2010 and found Latino candidates were on the ballot just 5% of the time...

Eric Gonzalez Juenke analyzed nearly 10,000 statehouse elections in 2000 and 2010 and found Latino candidates were on the ballot just 5 percent of the time. But when Latinos did run for office, they won just as often as their white counterparts – even in districts where most voters were white. Juenke’s other research suggests the same holds true for black and other ethnic minority candidates...

Ignorance is bias: The effect of Latino Losers on models of Latino representation

2014 Nearly every aggregate study of minority legislative representation has observed outcomes of elections (officeholders), rather than the supply of minority candidates. Because of this, scholars have left a large amount of important data, the election losers, out of their models of minority representation. The evidence presented in this article demonstrates that voters in the United States cannot choose minority officeholders because there are rarely minority candidates on the ballot. I use state legislative candidate data from Carsey et al. (2008) and Klarner et al. (2012) to test models of Latino representation that correct for first‐stage selection bias. Once candidate self‐selection is taken into account, the probability of electing a Latino increases enormously. I then use data from 2010 to make out‐of‐sample predictions, which clearly favor the conditional model. Thus, our current understanding of Latino representation is significantly biased by ignoring the first stage of an election, a candidate's decision to run.

2012 We use state legislator ideology estimates (standardized W‐nominate values) to examine whether Latino and African American legislator ideological differences can be explained away by traditional constituency characteristics like partisanship and demographics. We find instead that both Black and Latino legislators are unique “types.” Our evidence supports the theoretical presumption that there is a minority dimension to legislative voting and that it is uniquely personified by minority officeholders. White, Black, Latino, Democrat, and Republican representatives are all examined for responsiveness to different partisan and racial/ethnic populations. The dataset includes all 50 state legislatures from the 1999–2000 legislative sessions, including information from the U.S. Census, NALEO, the Joint Center for Political and Economic Studies, Gerald Wright's Representation in the American Legislature Project, and CQ Press's Almanac of State Legislative Elections.

2011 The creation of racial/ethnic majority-minority districts lies at the heart of debates regarding the utility of descriptive representation for minority policy advocacy. The general puzzle that emerges from these debates, however, rests on the possibility that by electing representatives who are policy outsiders, minority interests would exert little influence in the policy decisions of median-dominated institutions. The authors present a model that shows how majority-minority districts can act to (1) increase the likelihood of electing minority representatives who are unique policy advocates and (2) concurrently increase the level of institutional status of descriptive representatives. The empirical analysis employs a novel data set of observations on political, sociodemographic, roll-call and institutional position, covering twenty U.S. states in the late 1990s and over 2,600 state legislative seats to show how majority-minority districts produce policy outsiders as well as institutional insiders.