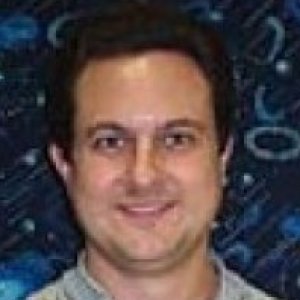 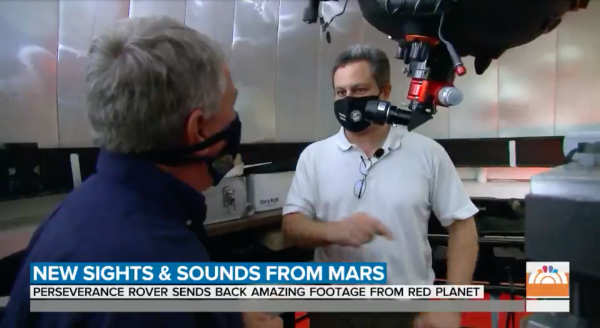 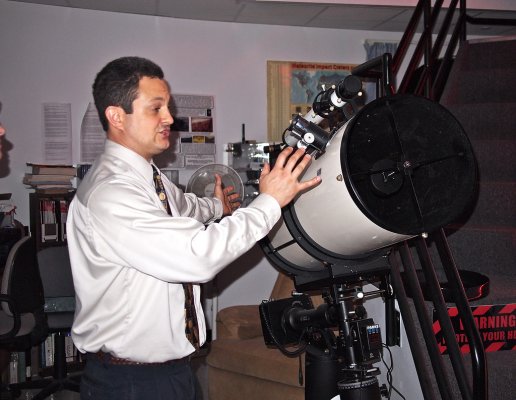 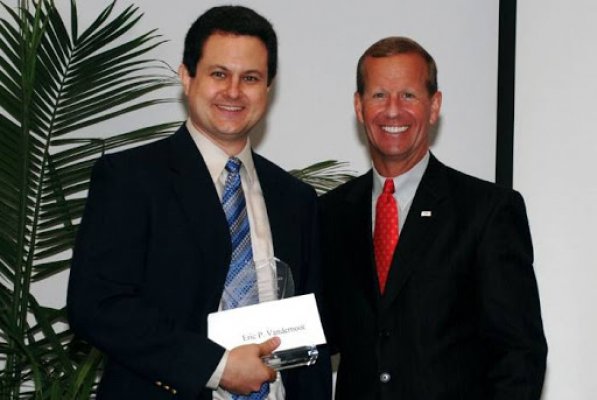 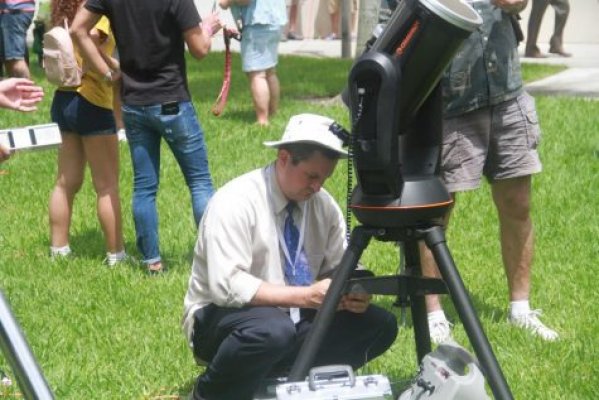 At Florida Atlantic University (FAU) in Boca Raton, Florida, Eric teaches courses on Planetary Mechanics and Introduction to Astronomy, and since 2005 he has run the Astronomical Observatory there. FAU's Observatory provides observations to the students taking the university's astronomy classes, hosts field trips from local schools and provides twice a month observations for the general public as well as events of special astronomical interest. He received his M.S. in Physics at FAU, in which the thesis was about Bardeen-Petterson accretion disks about compact massive objects and was published in The Astrophysical Journal. From his role in the observatory, he became concerned about the growing impact of light pollution, so he has been working to educate the public about the problem.

WPTV's Janny Rodriguez spoke with Eric Vandernoot, an astronomy and physics lab coordinator at Florida Atlantic University, to learn more. "The fact that you're seeing people from the Hobe Sound and the Bahamas seeing it simultaneously tells me that it's extremely high up in the sky," Vandernoot said.

“If you are really observant, you might notice a little bit of a difference as far as it being bigger and brighter, but it won’t be starkly apparent,” said Florida Atlantic University astronomy professor Eric Vandernoot.

Florida Atlantic University astronomer Eric Vandernoot said the comet Halley (pronounced hal-ee) is a household name because it can be seen without special equipment and makes an appearance about every 76 years. “There really isn’t any other short-period comet that is visible to the naked eye,” Vandernoot said. “So when it comes, it gets superstar billing.”

“The Geminids offer slow, brighter than average meteors with some having hints of color, reds and yellows,” said Eric Vandernoot, astronomy and physics lab coordinator at Florida Atlantic University. “As for the best of the year, well, that often depends on the lunar phase at the time. This year’s Geminids are very favorable for viewing.”

Many had a unique view of the solar eclipse from the university’s observatory, where small groups filed in to see the 80 percent eclipse through a 14-inch Schmidt-Cassegrain telescope with a hydrogen-alpha filter. The technology gave the glowing orb an appearance of a “deep, deep, bright red,” said Eric Vandernoot, director of the observatory.

Where will you watch the solar eclipse?

Over at Florida Atlantic University, astronomy professor Eric Vandernoot has a lot of exciting work to do. "There's not been a cross country eclipse -- coast to coast like this -- in 99 years," he said.

It still will be broad daylight here even though much of the sun will be hiding behind the moon, according to Eric Vandernoot, astronomy and physics lab coordinator at Florida Atlantic University.

Concern over proposed cuts to NOAA

FAU Astronomy Professor Eric Vandernoot says NOAA's satellite programs are critical and any cuts would be detrimental. "Satellites are aging so they occasionally need to be replaced," says Vandernoot.

If trees are budding earlier, this could have a larger effect on the surrounding ecosystem. Eric Vandernoot, the lab coordinator of the Florida Atlantic University Astronomical Observatory, says light pollution alters plant cycles. It throws their bud dormancy out of whack, along with their growth patterns and time when they drop their leaves and fruit.

2005 In this work we show that Bardeen-Petterson accretion disks can exhibit unique, detectable features in relativistically broadened emission line profiles. Some of the unique characteristics include inverted line profiles with sharper red horns and softer blue horns and even profiles with more than 2 horns from a single rest-frame line. We demonstrate these points by constructing a series of synthetic line profiles using simple two-component disk models. We find that the resultant profiles are very sensitive to the two key parameters one would like to constrain, namely the Bardeen-Petterson transition radius r_{BP} and the relative tilt \beta between the two disk components over a range of likely values [10 < r_{BP}/(GM/c^2) < 40 ; 15deg < \beta < 45deg]. We use our findings to show that some of the ``extra'' line features observed in the spectrum of the Seyfert-I galaxy MCG--6-30-15 may be attributable to a Bardeen-Petterson disk structure. Similarly, we apply our findings to two likely Bardeen-Petterson candidate Galactic black holes - GRO J1655-40 and XTE J1550-564. We provide synthetic line profiles of these systems using observationally constrained sets of parameters. Although we do not formally fit the data for any of these systems, we confirm that our synthetic spectra are consistent with current observations.