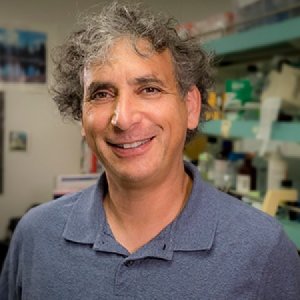 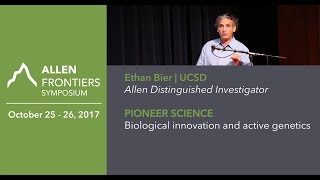 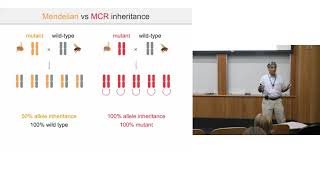 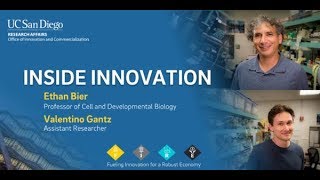 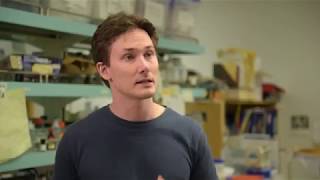 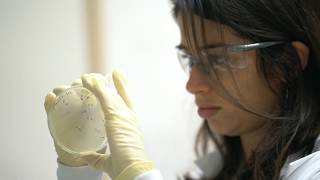 Bier is a distinguished professor who holds the Tata Chancellor's Endowed Professorship in Cell and Developmental Biology at UC San Diego. He also serves as science director for the new Tata Institute for Genetics and Society. During the past 25 years at UC San Diego, Bier has studied how secreted proteins known as morphogens subdivide the dorsal-ventral axis of the fruit fly embryo into neural versus epidermal regions and how such processes result in the formation of sharp boundaries. These are among the most conserved evolutionary processes.

Bier has also used the common fruit fly to study mechanisms of human disease. His work in this area has focused recently on understanding the mechanisms by which bacterial toxins contribute to breaching host barriers. Thus, two toxins produced by anthrax bacteria trigger potentially fatal vascular leakage while cholera toxin leads to breakdown of the intestinal barrier leading to acute life-threatening diarrhea.

Bier graduated Phi Beta Kappa as a Regents Scholar from UC San Diego in 1978 with degrees in biology and mathematics. He received his Ph.D. from Harvard Medical School where he studied regulation of immune genes in Dr. Allan Maxam’s laboratory from 1978-1985. He did his postdoctoral studies on development of the nervous system at UC San Diego with Dr's. Lily and Yuh Nung Jan (1985-90) and then assumed a faculty position at UC San Diego in 1990. He is an Alfred P. Sloan and Basil O’Connor Scholar and an Allen Distinguished Investigator.

In 2015, University of California San Diego biologists Ethan Bier and Valentino Gantz developed a breakthrough technology known as "active genetics," which results in parents transmitting a genetic trait to most of their offspring (instead of 50 percent receiving the trait under standard inheritance). Immediate targets of active genetics included gene-drive systems for immunizing mosquitoes against vector borne diseases such as malaria. Bier and Gantz also proposed using active genetics for a variety of other potential human health and agricultural benefits...

Revolutionary gene drive works in lab, but will it succeed in the wild?

Suspicion of such projects that are aimed at developing countries is high in some quarters, because it could be viewed as using those nations as test subjects for something Americans view as too risky to use in their own country. “I think it will make it very clear that we’re not just trying to push this technology on the developing world untested in some type of do-gooder way, but we’re actually very seriously considering using it on ourselves,” Bier said, emphasizing that this was his personal view. “That's what we’re hoping to do, and we’re confident enough in the technology that we would propose doing so.”

UC San Diego researchers Valentino Gantz and Ethan Bier discuss the implications of genetic technology that actively drives mutations through a population. Biology professor Ethan Bier and Valentino Gantz, a graduate student in Bier’s lab, demonstrated how to rapidly and reliably spread genetic mutations in animals. Because the mutations aggressively convert targeted genes — say, introducing a trait for disease resistance — they can be introduced into large populations in or outside of the lab...

2018 Bacillus anthracis, the causative agent of anthrax, has been a focus of study in host-pathogen dynamics since the nineteenth century. While the interaction between anthrax and host macrophages has been extensively modeled, comparatively little is known about the effect of anthrax on the immune function of neutrophils, a key frontline effector of innate immune defense. Here we showed that depletion of neutrophils significantly enhanced mortality in a systemic model of anthrax infection in mice. Ex vivo, we found that freshly isolated human neutrophils can rapidly kill anthrax, with specific inhibitor studies showing that phagocytosis and reactive oxygen species (ROS) generation contribute to this efficient bacterial clearance. Anthrax toxins, comprising lethal toxin (LT) and edema toxin (ET), are known to have major roles in B. anthracis macrophage resistance and systemic toxicity. Employing isogenic wild-type and mutant toxin-deficient B. anthracis strains, we show that despite previous studies that reported inhibition of neutrophil function by purified LT or ET, endogenous production of these toxins by live vegetative B. anthracis failed to alter key neutrophil functions. The lack of alteration in neutrophil function is accompanied by rapid killing of B. anthracis by neutrophils, regardless of the bacteria's expression of anthrax toxins. Lastly, our study demonstrates for the first time that anthrax induced neutrophil extracellular trap (NET) formation.

2017 Various bacterial toxins circumvent host defenses through overproduction of cAMP. In a previous study, we showed that edema factor (EF), an adenylate cyclase from Bacillus anthracis, disrupts endocytic recycling mediated by the small GTPase Rab11. As a result, cargo proteins such as cadherins fail to reach inter-cellular junctions. In the present study, we provide further mechanistic dissection of Rab11 inhibition by EF using a combination of Drosophila and mammalian systems. EF blocks Rab11 trafficking after the GTP-loading step, preventing a constitutively active form of Rab11 from delivering cargo vesicles to the plasma membrane. Both of the primary cAMP effector pathways -PKA and Epac/Rap1- contribute to inhibition of Rab11-mediated trafficking, but act at distinct steps of the delivery process. PKA acts early, preventing Rab11 from associating with its effectors Rip11 and Sec15. In contrast, Epac functions subsequently via the small GTPase Rap1 to block fusion of recycling endosomes with the plasma membrane, and appears to be the primary effector of EF toxicity in this process. Similarly, experiments conducted in mammalian systems reveal that Epac, but not PKA, mediates the activity of EF both in cell culture and in vivo. The small GTPase Arf6, which initiates endocytic retrieval of cell adhesion components, also contributes to junctional homeostasis by counteracting Rab11-dependent delivery of cargo proteins at sites of cell-cell contact. These studies have potentially significant practical implications, since chemical inhibition of either Arf6 or Epac blocks the effect of EF in cell culture and in vivo, opening new potential therapeutic avenues for treating symptoms caused by cAMP-inducing toxins or related barrier-disrupting pathologies.

2017 The multifunctional NS1 protein of influenza A viruses suppresses host cellular defense mechanisms and subverts other cellular functions. We report here on a new role for NS1 in modifying cell-cell signaling via the Hedgehog (Hh) pathway. Genetic epistasis experiments and FRET-FLIM assays in Drosophila suggest that NS1 interacts directly with the transcriptional mediator, Ci/Gli1. We further confirmed that Hh target genes are activated cell-autonomously in transfected human lung epithelial cells expressing NS1, and in infected mouse lungs. We identified a point mutation in NS1, A122V, that modulates this activity in a context-dependent fashion. When the A122V mutation was incorporated into a mouse-adapted influenza A virus, it cell-autonomously enhanced expression of some Hh targets in the mouse lung, including IL6, and hastened lethality. These results indicate that, in addition to its multiple intracellular functions, NS1 also modifies a highly conserved signaling pathway, at least in part via cell autonomous activities. We discuss how this new Hh modulating function of NS1 may influence host lethality, possibly through controlling cytokine production, and how these new insights provide potential strategies for combating infection.

The dawn of active genetics

Bioessays : News and Reviews in Molecular, Cellular and Developmental Biology

2015 On December 18, 2014, a yellow female fly quietly emerged from her pupal case. What made her unique was that she had only one parent carrying a mutant allele of this classic recessive locus. Then, one generation later, after mating with a wild‐type male, all her offspring displayed the same recessive yellow phenotype. Further analysis of other such yellow females revealed that the construct causing the mutation was converting the opposing chromosome with 95% efficiency. These simple results, seen also in mosquitoes and yeast, open the door to a new era of genetics wherein the laws of traditional Mendelian inheritance can be bypassed for a broad variety of purposes. Here, we consider the implications of this fundamentally new form of “active genetics,” its applications for gene drives, reversal and amplification strategies, its potential for contributing to cell and gene therapy strategies, and ethical/biosafety considerations associated with such active genetic elements.

2015 Genetic engineering technologies can be used both to create transgenic mosquitoes carrying antipathogen effector genes targeting human malaria parasites and to generate gene-drive systems capable of introgressing the genes throughout wild vector populations. We developed a highly effective autonomous Clustered Regularly Interspaced Short Palindromic Repeats (CRISPR)-associated protein 9 (Cas9)-mediated gene-drive system in the Asian malaria vector Anopheles stephensi, adapted from the mutagenic chain reaction (MCR). This specific system results in progeny of males and females derived from transgenic males exhibiting a high frequency of germ-line gene conversion consistent with homology-directed repair (HDR). This system copies an ∼17-kb construct from its site of insertion to its homologous chromosome in a faithful, site-specific manner. Dual anti-Plasmodium falciparum effector genes, a marker gene, and the autonomous gene-drive components are introgressed into ∼99.5% of the progeny following outcrosses of transgenic lines to wild-type mosquitoes. The effector genes remain transcriptionally inducible upon blood feeding. In contrast to the efficient conversion in individuals expressing Cas9 only in the germ line, males and females derived from transgenic females, which are expected to have drive component molecules in the egg, produce progeny with a high frequency of mutations in the targeted genome sequence, resulting in near-Mendelian inheritance ratios of the transgene. Such mutant alleles result presumably from nonhomologous end-joining (NHEJ) events before the segregation of somatic and germ-line lineages early in development. These data support the design of this system to be active strictly within the germ line. Strains based on this technology could sustain control and elimination as part of the malaria eradication agenda.