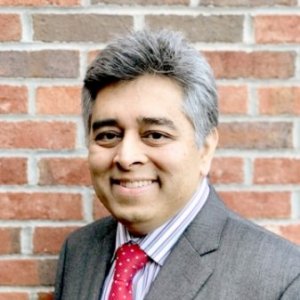 
One of the world’s foremost experts on reconfigurable vertical lift with extensive work on rotor span, chord, twist and airfoil morphing 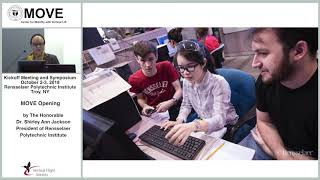 Increasing the forward speed of helicopters has the potential to save lives by expediting access to medical care. The Center for Flow Physics and Control (CeFPaC) and the Center for Mobility with Vertical Lift (MOVE) at Rensselaer Polytechnic Institute are partnering to address this challenge, with the support of grants from the Army Research Office and the Israeli Ministry of Defense.

Officials said under the leadership of Farhan Gandhi, the Rosalind and John J. Redfern Jr. '33 Professor of Engineering, MOVE—The Center ...

This study systematically investigates the aerodynamic interactions of a two-rotor system with a front rotor and an aft rotor aligned with the direction of ﬂow. The rotors are 5.5 ft diameter ﬁxed-pitch rotors operating at around 12 lb/ft2 disk loading, representative of large eVTOL aircraft. Fluid ﬂow is simulated using the commercial Navier-Stokes solver, AcuSolve, with a Detached Eddy Simulation (DES) model. Simulations were performed at 40 kts edgewise ﬂight for 9 cases corresponding to three values of longitudinal hub-hub separation (2.5R, 3R, 3.5R) and three values of vertical offset (0, 0.25R, 0.5R). Aft rotor performance was compared to an isolated rotor operating in the same conditions in order to quantify the effects of rotor-rotor interaction. For the cases where the aft rotor is closest to the front rotor (2.5R longitudinal offset, zero vertical offset), the aft rotor produced 8.4% less thrust, and required 13.4% higher torque than a rotor in isolation. When vertical rotor separation was increased, interactional aerodynamic effects decreased. For a 2.5R longitudinal offset, increasing the vertical offset to 0.5R decreased the lift deﬁcit to 4.6% and the torque penalty to 6.8%. Increasing the longitudinal offset to 3.5R (while keeping the vertical offset at zero) also reduced interactional aerodynamic effects, but reductions in lift deﬁcit and torque penalty were smaller than those observed with 0.5R vertical offset.

The present study proposes and explores a new autonomous morphing concept, whereby an increase in helicopter rotor blade camber of the order of 12-13° is realized over the inboard section of the blade with increase in ambient temperature. The camber change is achieved through a proper integration of Shape Memory Alloys (SMAs) on the lower surface of the blade aft of the leading-edge spar. For a reference rotor (no-SMA) generating 21,000 lbs thrust, operation in hot conditions resulted in a 2,590lb loss in lift. When the SMA camber morphing section extends from the blade root to 50% span, the rotor recovered up to 43% of the lift loss at high temperature. If the camber-morphing section is further extended to 75% span, up to 82% of the lost lift can be recovered.

The present study proposes an augmentation to the existing control mixing on the UH-60 Black Hawk to utilize the horizontal stabilator as an available control effector in the feedback loop to compensate for locked-in-place failure in the main rotor swashplate actuators. This modiﬁcation has previously been shown to work in an adaptive sense, where once failure is detected the control mixing is remapped in ﬂight. Now it is shown to perform well when the deﬁned mixing includes the stabilator for all time, including the undamaged case, removing the need to detect and identify speciﬁc failures on the aircraft. Further investigation considered the beneﬁt of allowing for more or less longitudinal authority to be given to the stabilator in different ﬂight conditions, which include main rotor swashplate actuators locked-in-place, in the context of handling qualities ratings for the aircraft in pitch attitude and vertical rate response. Post-failure, the aircraft is demonstrated to retain level 1 performance in the pitch axis, whereas only aft actuator failure remains level 1 in the vertical rate response. Both cases show general improvement in handling qualities ratings with increased authority given to the horizontal stabilator. Finally, the aircraft is simulated ﬂying a trajectory to a recoverable aircraft state, where the descent rate and forward speed are appropriate for a rolling landing.

Post-Rotor-Failure Performance of a Feedback Controller for a Hexacopter

A feedback controller is designed and implemented for a regular hexacopter based on the AeroQuad Cyclone ARF kit. This controller is designed with an inner loop control law as a set of parallel PID controllers for aircraft altitude, pitch, roll, and yaw attitudes, as well as an outer loop for control over aircraft body velocities. Rotor failure is modeled in the dynamic simulation by setting the rotor force and moment output to be zero regardless of the commanded control input to that rotor, the feedback controller utilizes no knowledge of this fault during simulation. Various trajectories are commanded to examine the performance of the baseline feedback controller in the event of forward rotor failure, including hover, forward ﬂight, and more complex maneuvers. The controller is demonstrated to recover the aircraft states after the transient effects of the rotor failure, as well as complete the deﬁned state trajectory, demonstrating tolerance to single rotor failure.

This study compares the effectiveness of an on-blade active trailing-edge tab and an adjustable pitch link mechanism for rotor track-and-balance. The active tab is an extendable trailing-edge-plate over a spanwise section of each blade. A simulation model of the UH-60 Black Hawk rotor with seeded imbalance is developed, with the pitch links/tabs minimizing the 1/rev (1P) vibratory loads using a weighted least-squares optimization method. The trailing-edge tab has the ability to significantly reduce the 1P in-plane forces in hover but shows more modest reductions in cruise. The tabs are unable to reduce 1P vertical forces in hover but are very effective in reducing them in cruise, and are also moderately effective in reducing 1P in-plane moments over the range of airspeeds. Best reductions in 1P loads are achieved by employing an active tab mechanism (adjusted at different airspeeds) over a passive mechanism (with constant setting over the air speed range), with the active tab yielding additional gains in 1P in-plane forces and moments in hover and in 1P vertical forces in cruise. Compared to the trailing-edge tab, the pitch link shows significantly larger reductions in 1P in-plane forces over all airspeeds and simultaneously reduces 1P vertical force to comparable levels in cruise. Reductions in 1P in-plane moments with the pitch link are comparable to those with the trailing-edge tabs in hover but show a slight improvement in cruise. In contrast to the trailing-edge tab, minimal differences are observed between active and passive pitch links, except for the case of 1P in plane forces in hover. In hover, for both tab and pitch link, an examination of the load reduction process indicates that a seeded radial shear and root torsional moment imbalance is cancelled by the generation of net blade root chordwise shear and root flap bending moments, respectively, on orthogonal blades. In cruise, a similar process is observed, but the generation of net radial shears and root torsional moments on opposing blades were also contributors to total reduction in 1P hub in-plane and pitching moment vibrations for the trailing-edge tab.

This paper investigates the load alleviation capability of a camber morphing blade tip on multi megawatt scale HAWTs. A span-wise variation of camber at the outer blade region is proposed that blends seamlessly to the non-morphing part of the rotor blade. The NREL 5MW reference turbine is used as baseline design, where the outer 30% of the blade is linearly cambered with the maximum camber realized at the blade tip. The results obtained during simulations, following the IEC standard, indicate that the camber morphing blade tip is able to mitigate vibrational loads, such that reduction in fatigue loads range between 8%-37% for most wind turbine components. Furthermore, the controller is also capable of reducing ultimate loads due to extreme turbulence in the order of 30%-60%. Finally, a large reduction in peak-to-peak response, in the order of 43%-90%, is achieved for several turbine components under wind gust or extreme direction change.