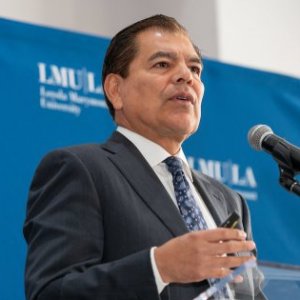 Fernando J. Guerra, professor of political science and chicana/o latina/o studies, is the founding director of the Center for the Study of Los Angeles at LMU. His area of scholarly work is in local governance, urban politics, and racial and ethnic politics. Dr. Guerra has been a principal investigator in over 20 major studies on Los Angeles, leadership studies and electoral politics. He is also the principal investigator for the largest general social survey in the Los Angeles region.

Dr. Guerra has served on standing commissions, blue ribbon committees, and ad hoc task forces for the City of Los Angeles, the State of California, and regional bodies in Southern California. He is a source for the media at the local, national, and international level and has been cited and interviewed by The Los Angeles Times, The New York Times, The Washington Post, KCAL9, KCBS, PBS News Hour, KPCC Radio, La Opinión, The San Jose Mercury News, The Chicago Tribune, The Wall Street Journal, Newsweek, Business Week, The Economist, The Guardian and other media outlets in Latin America, Europe, and Asia.

In the state of California, the number of signatures required to qualify a measure for the ballot is based on the number of votes cast in the gubernatorial race. The rise in signature requirements will make efforts to qualify future propositions more expensive.

Fernando Guerra was quoted by KQED News for his remark that a race between Antonio Villaraigosa and Gavin Newsom would have been more exciting, rather than a race against John Cox.

Fernando Guerra explains his reasoning as to why voter numbers are a record high: it is easier to vote in California now through DMV programs and online registration.

From the killing of a journalist to the midterm elections, Loyola Marymount professor Fernando Guerra discusses the latest in politics.

Voters have fewer propositions to sift through than two years ago, but will be asked to vote on 11 statewide ballot measures this fall. Among them, Californians will decide whether local governments should be able to expand rent control, whether to retain the gas tax, and if the state should only sell cage-free eggs.

Some data for Garcetti to know before selecting next LAPD chief

Dr. Guerra discusses Angelenos' public opinion of the Los Angeles Police Department in the last couple of decades and how these perceptions should be considered when appointing the next LAPD Chief.

Los Angeles: The Perfect Non-Campaign: The Election of a Hipster Mayor

Why California Matters: How California Latinos Influence the Presidential Election

Chapter on Latino voters in California as part of the volume titled" Beyond the Barrio: Latinos in the 2004 Elections" Edited by Rodolfo O. de la Garza, Louis DeSipio, and David L. Leal

In the 2003 California gubernatorial recall election 2,775,785 absentee ballots were cast, representing about 30 percent of all voters statewide. Given the number of absentee ballots and the increasing propensity for voters in California and elsewhere to choose this voting method, we some basic questions: Who are absentee voters, and are they different from polling place voters?To answer these questions, we fielded a statewide survey of absentee voters in the days before the October 7 recall election, asking respondents why they voted absentee, their partisan and ideological preferences, demographic characteristics, and other relevant questions. We find that absentee voters do not differ significantly from the overall state electorate in terms of their vote preferences, despite being older and better educated. For example, 56 percent of absentee voters in our survey voted “yes” on the recall, compared with 55 percent for the entire state, according to official returns. Further, absentee voters favored Arnold Schwarzenegger over Cruz Bustamante by a considerable margin, similar to the overall election results. We found party registration among absentee voters to be nearly identical to statewide partisan registration

In November 2000, exit poll interviews with voters in Florida indicated that Al Gore won the state. As a result, many television networks declared Gore the winner of Florida, a pivotal state to winning the presidency in 2000. Only a few hours later, the first vote tallies from the Florida Secretary of State's office revealed that George W. Bush was in fact leading in Florida. After 45 days of recounts and lawsuits, it was clear that the exit polls were wrong; Bush had won the state by the narrowest of margins. As a result of the flawed exit poll the media and pollsters scoured and reanalyzed the methodology used in 2000 to prepare and correct for the 2004 presidential election. The old system, Voter News Service (VNS) was scrapped entirely, and Edison-Mitofsky Research was chosen to implement a new and more accurate national exit poll in 2004 by a consortium of news organizations retained by the Associated Press called the National Election Pool (NEP). What happened? Exit poll results from Edison-Mitofsky showed John Kerry ahead in Ohio, Florida, and New Mexico—all states which he lost to Bush in 2004.Author names are listed alphabetically. The co-authors were also the co-principal investigators of the Loyola Marymount University 2005 Los Angeles Mayoral Exit Poll. Thanks to Salvador Paniagua and Haven Perez for their tremendous research assistance in implementing this project and to the more than 120 student researchers who participated in the exit polling and data entry. Robert Aguinaga and Antonio Gonzalez of the Southwest Voter Registration and Education Project also provided valuable assistance in implementing the poll. Mark Blumenthal, of mysterypollster.com was instrumental in tracking down exit poll archives.

Latino Politics in California: The Necessary Conditions for Success

Theory, Reality, and Perpetual Potential: Latinos in the 1992 California Elections

The characterization of the Latino role in the 1992 election is sobering. A number of commentators on California politics and many Latino leaders saw 1992 as representing an opportunity for Latinos to be major players in statewide elections. Using the California experience, this chapter offers the following model of conditions that must be met for Latinos to influence any statewide election. These conditions are subdivided into two categories. The first, contextual conditions, is linked in that each represents factors outside Latinos' effective control. The second category, strategic conditions, is linked in that these conditions are largely within effective control of Latino leaders, organizations, electorates, and communities generally. Many new electoral opportunities for Latinos presented themselves for the first time in ten years. The 1992 reapportionment created a congressional seat in the heart of the East Side of Los Angeles, which pushed the three seats already held by Latinos farther east.