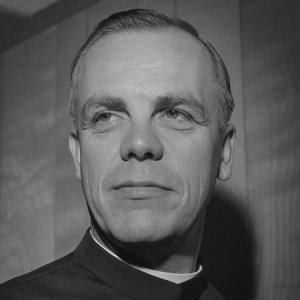 
Richard Rolfs is a specialist on the history of the Third Reich, the Holocaust and the roots of anti-Semitism.

Fr. Richard (Dick) Rolfs is a Professor Emeritus of History. He is a specialist on the history of the Third Reich, the Holocaust and the roots of anti-Semitism. Fr. Rolfs joined Loyola University in 1968 as an instructor in Political Science. He became an Assistant Professor of European History at LMU in 1974, an Associate Professor in 1980, and a Professor in 1997. Fr. Rolfs served as Dean of Students from 1964-70, as President of the Academic Assembly from 1978-79, and as Chairman of the Department of History from 1978-86. Additionally, Fr. Rolfs was a member of the Board of Trustees from 1978-86, serving on the Executive Committee, the Facilities and Long Range Planning Committee, the Committee for Academic Affairs, and the Student Affairs Committee.

Born in West Bend, Wisconsin, Fr. Rolfs is a non-degreed alumnus, having attended Loyola University from 1946-48. He holds an AB in Philosophy ('55), an MA in History ('56), and an MA in Philosophy ('56) from Gonzaga University. In addition, he received a Licentiate in Theology from the University of Innsbruck, Austria in 1962 and a PhD from the University California, Santa Barbara in 1976. While attending Loyola University, he was a member of the Pep Band, and a golf and football student athlete. Fr. Rolfs has served as a Grand Reunion Volunteer (1990, 1995, 2006) and as a Class Representative (1994). He joined the Society of Jesus in 1948 and was ordained a priest in 1961. Fr. Rolfs began his teaching career at Loyola High School, where he taught from 1955-58. His brother, John H. Rolfs, is a fellow alumnus (BS, Economics, 1948).

History of the Third Reich