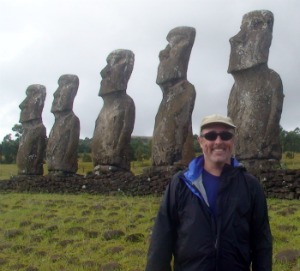 In March 2007 I sold my house and have been traveling around the world ever since. Since I started traveling, I have probably done and seen more than I have in the rest of my life combined.
So far I have visited over 100 countries, 49/50 US states, 9/10 Canadian provinces, every Australian state and territory, over 100 US National Park Service sites and over 150 UNESCO World Heritage Sites.

When I went on my first around the world trip I created a small website for the people in my office to follow my trip. The word “blog” wasn’t around at the time, but I suppose it was a travel blog of sorts. I posted photos and updates, usually over dial-up connections that were available in 1999.
Given my background, when I started traveling in 2007 having a website was just a given.
About 9 months into my trip I was in Hong Kong and I began thinking seriously about what I was doing online. Not many people were reading my site. I probably knew the names of most of my readers because they were friends and family. I decided to rethink how I was doing things and began to take the site more seriously.
Fast forward several years and the blog has done alright. It was named by Time Magazine as one of the Top 25 Blogs in the World in 2010. I have about 100,000 people visit the site every month and over 15,000 RSS and email newsletter subscribers

Visited over 100 countries and territories around the world