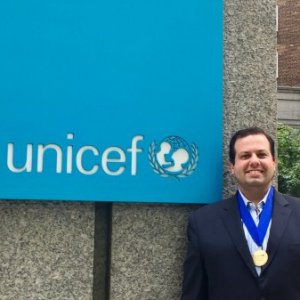 George Stamatis is a globally respected Children's Rights Activist & Advocate since 14, leading in the community/non-profit sector (15+ years), as a Co-Founder, as Fundraiser, Executive, Board Member, Relief Effort Coordinator and as an Entrepreneur who enjoys turning ambitious strategic ideas and visions that have a positive impact into reality. Creating key relationships & partnerships with his business acumen with resiliency & persistence are keys to his success.

At 14, he read an article about children being abused in a center in his own province. He deeply believed he could make a difference in his own way, influence it and make it better for children. A year later, himself and his mentor Robert Hatton were able it to shut it down.

George often says “Yes I am crazy, ambitious and a risk-taker but didn't Steve Jobs once said that "People who are crazy enough to think they can change the world, are the ones who do?” ;)

George's ultimate goal in life? "I have a moral duty & obligation to End World Hunger before I die"

George has an obsession with empathy ❤️
--
President Bill Clinton to George "Fortunately, there are people like you who have selflessly made the welfare of these children a priority. Thank You for all you do to give children everywhere a real chance for a better future."

UN Chair “15 years of dedication...and for the very hard work you have done, I have the pleasure to congratulate you and to stress the need to have people like you to change the attitude towards children."

Montreal Mayor Tremblay to George "You are an example for younger generations. It is people like you who enhance our society"
--

0 to 5500 *Will consider certain engagements for no fee