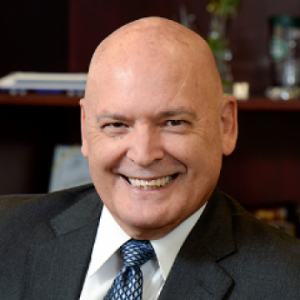 Glen L. Stimmel, a USC faculty member since 1974, served as Interim Dean of the USC School of Pharmacy and the John Stauffer Dean's Chair in Pharmaceutical Sciences from 2015-2016, and the Associate Dean of Academic Affairs from 2016-2020. Before being awarded the Professor
Emeritus of Clinical Pharmacy designation by the University of Southern California, he served as a professor of Clinical Pharmacy, Psychiatry and the Behavioral Sciences in the School of Pharmacy and the Keck School of Medicine.

Stimmel has long been a national voice in expanding the scope of practice for pharmacists, including advocacy for pharmacist prescriptive authority. He led a pivotal pilot project in the late 1970s that was one of only two funded statewide to examine the safety and efficacy of pharmacists serving as prescribers. The successes of more than 30 pharmacist prescribers in this pilot program -- practicing in a wide variety of healthcare settings -- led to passage of legislation in California allowing pharmacists to initiate and modify drug treatment, order lab tests, perform physical assessments and administer drugs under physician authority. This law set the stage for further expansion of pharmacist authority passed in California in 1983 and, ultimately, 2013’s Senate Bill 493, which recognizes pharmacists as healthcare providers.

Throughout his career, Stimmel has published numerous studies and opinion pieces in a range of journals supporting the expanded practice role for pharmacists. His clinical work has focused on psychiatric pharmacy, as well as maintaining a longstanding practice in geriatrics and rheumatology at the LAC+USC Primary Care Clinics. Stimmel has long been a prolific scholar in the field, having published over 230 articles and textbook chapters and pioneered efforts in developing psychiatric pharmacy practice, education and residency programs.

The College of Psychiatric and Neurologic Pharmacists (CPNP) Foundation presented its second Career Achievement Award to Dr. Glen Stimmel, PharmD on April 19, 2016 in Colorado Springs during the CPNP Annual Meeting.

Serotonin syndrome: is it a reason to avoid the use of tramadol with antidepressants?

2014 There is a warning associated with all serotonergic antidepressants and its concomitant use with tramadol due to the concern for a drug-drug interaction resulting in serotonin syndrome (SS). The prescribing of antidepressants with tramadol may be unnecessarily restricted due to fear of causing this syndrome.

Sexual dysfunction in women with epilepsy: role of antiepileptic drugs and psychotropic medications

2008 Sexual dysfunction is a frequently encountered comorbid disorder in patients with neurological and psychiatric disorders. Importantly, sexual dysfunction can also occur as a treatment emergent adverse effect of a number of commonly used psychotropic and antiepileptic medications, and can include decreased libido, erectile dysfunction, disordered arousal, delayed orgasm, and anorgasmia. These effects can occur in both men and women, and can be seen across age groups.

2006 In recent years, the frequency of antidepressant drug-induced sexual dysfunction has increased, along with the use of new drugs for the treatment of erectile dysfunction and premature ejaculation. It has thus become common for pharmacists to counsel patients about sexual issues. Pharmacists must not only become knowledgeable about these drugs and their indications, but they must also become skilled and comfortable with counseling patients and answering questions from both patients and other health care providers. In addition to therapeutic information, pharmacists' discussions with patients should take into account factors that contribute to treatment nonadherence and treatment failure. Patient education is essential to ensure optimum outcomes for pharmacologic treatments for both erectile dysfunction and premature ejaculation. Improper use of phosphodiesterase-5 inhibitor drugs for erectile dysfunction accounts for most nonresponsiveness and discontinuation of treatment. Drug-induced sexual dysfunction is common with some psychotropic drugs. Up to 50% of men will experience delayed ejaculation, and at least 30% of men and women will experience anorgasmia from antidepressant drugs with serotonin agonist activity. Trazodone is the drug most commonly associated with the rare but very serious adverse effect of priapism. The pharmacist who is both competent and comfortable discussing sexual function and dysfunction with patients can make positive contributions to their therapeutic outcomes as well as their quality of life.

Pharmacologic treatment strategies for sexual dysfunction in patients with epilepsy and depression.

2006 Psychotropic drugs are often associated with sexual dysfunction. The frequency of antidepressant-associated sexual dysfunction is greatly underestimated in clinical trials that rely on patient self-report of these adverse events. Direct inquiry reveals that delayed orgasm/ejaculation occurs in >50% and anorgasmia in at least one third of patients given selective serotonin reuptake inhibitors. Antidepressant-induced sexual dysfunction can be successfully managed. A different antidepressant without significant sexual effects, such as bupropion or mirtazapine, can often be substituted. Other strategies involve drug holidays or adjunctive therapy with drugs such as sildenafil. Dopamine antagonist antipsychotic drugs are most commonly associated with decreased libido. The newer atypical antipsychotics, with less effect on dopamine, are less commonly associated with sexual dysfunction. Sexual dysfunction is commonly reported with seizure disorders, and many anticonvulsant drugs affect levels of sex hormones. Because sexual dysfunction can be related to many factors, care must be taken to establish the patient's baseline sexual functioning before the initiation of psychotropic drug therapy and to rule out other etiologies before drugs are implicated as causative.