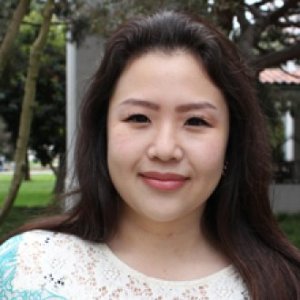 Gloria Shin is a lecturer in film and TV studies who teaches courses on postwar international and Hollywood cinema. At LMU she has designed courses that investigate the emergence of art and postcolonial cinemas, postmodernism, and global media cultures as well as the intersectionality of identity and its representation in Hollywood films.

An expert on race, gender, postwar stardom and celebrity culture, she has presented her work at the Society of Cinema and Media Studies numerous times. Her experimental short film ET: Then You Will Not Have Love was screenedat Console-ing Passions, an internationally recognized conference for scholars of television and experimental video. At USC, where she completed her graduate work, she was awarded the Frank Volpe Scholarship and has been as a media consultant for the Los Angeles Times.

Gloria's manuscript titled American Icon: Elizabeth Taylor as Postcolonial Star, the first full-length critical study of the movie star is set to be published in March 2022.

Beauty Culture and the Body

Sexuality in Hollywood Films and Sports

2012 This dissertation examines the iconicity of movie star Elizabeth Taylor and theorizes that the amalgam of her onscreen and off-screen images forms a textual body that serves as a metaphor for American Empire at the apex of its power and allows Taylor to become an exemplar of postcolonial whiteness, a social and political formation which she reveals is reified through the performance of a global citizenship that is characterized by encumbered transnational mobility and noblesse oblige.

‘If it be Love Indeed, Tell Me How Much’: Elizabeth Taylor, Richard Burton and White Pleasure After Empire

2012 In this paper, I use the iconicity of 1960s Elizabeth Taylor and Richard Burton to theorize the visualization and formation of an ecstatic postcolonial whiteness.