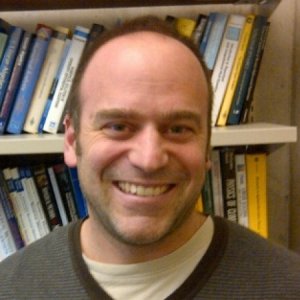 Climate change is one of the greatest threats to environmental and economic health, forcing the hand of governments, academia and industry to take increasing action towards a globally sustainable future. The dynamics of the atmosphere play a central role in the climate and climate change, and yet, this role is not well understood. A search for a better understanding of the atmosphere’s inherent behaviour and its relation to the climate are at the centre of the research of Greg Lewis, PhD, Associate Professor of Mathematics in the Faculty of Science.

His research focuses on the mathematical analysis of geophysical fluid dynamics, the naturally occurring, large-scale flows in the ocean and atmosphere. Although many factors such as changes in temperature, rotation, topography and the formation of clouds affect the dynamics of atmospheric systems, Dr. Lewis’ research centres on the effects of the primary factors, namely, heating and rotation. In particular, his research aims to determine the flow patterns that are expected as these factors are varied. A better understanding of such atmospheric dynamics may lead to improvements in the global climate models used to predict climate change.

Appointed to his current role in 2008, Dr. Lewis joined UOIT in 2003 as its first Assistant Professor of Mathematics. Since then, he has been rigorously building the university’s Applied and Industrial Mathematics, and Modelling and Computational Science undergraduate and graduate programs and growing the overall department. His early teaching and research influence has helped distinguish UOIT’s unique mathematics-based programs.

His inherent desire to understand how things work, initially led Dr. Lewis towards physics, earning his Bachelor of Science in Honours Physics and his Master of Science in Physics from McGill University, before shifting gears and completing his Doctorate in Applied Mathematics from the University of British Columbia (UBC). Subsequently, he was awarded three post-doctoral fellowships with the Peter Wall Institute for Advanced Studies in the Departments of Mathematics and Earth and Ocean Sciences at UBC, as well as NSERC and Jerrold E. Marsden fellowships with The Fields Institute of Research in Mathematical Sciences at the University of Toronto. He has been an invited Distinguished Alumni Lecturer at UBC’s Institute of Applied Mathematics, and is an Adjunct Professor in the Department of Mathematics and Statistics at York University in Toronto.

Since 2013, Dr. Lewis has been a Board of Directors member-at-large, and member of the CAIMS Doctoral Dissertation Awards Committee. CAIMS has a growing presence in industrial, mathematical, scientific and technological circles within and outside of Canada.

This journal aims to meet the publication needs of the burgeoning community of mathematicians who work on problems that are important to industry. Its central theme is the stimulation of innovative mathematics, statistics and related computational methods, by the modelling and analysis of such problems across engineering and the physical, biological and social sciences. Emphasis is on case studies drawn from actual applications of mathematics to industrial problems.

As principal investigator of this five-year research project, Dr. Lewis is focused on the bifurcation analysis of nonlinear partial differential equations using a combination of analytical and numerical methods with applications in geophysical fluid dynamics. His research aims to improve the understanding of how atmospheric systems are formed which may lead to improved global climate models.

The primary flow transition in a periodic differentially heated rotating channel of fluid with O(2) symmetry is studied. This transition occurs when a time-independent flow that is uniform along the channel bifurcates to a stationary wave flow. The fluid is modelled using the Navier–Stokes equations in the Boussinesq approximation and the flow transition is found using linear stability analysis. The computation of the flow transition curve is performed efficiently by replacing the relevant eigenvalue problem with an equivalent bordered linear system, and by implementing a pseudoarclength continuation strategy that is appropriate for large-scale systems. The dynamics of the fluid near the transition are deduced by applying centre manifold reduction and normal form theory. The reduction produces analytical expressions for the normal form coefficients in terms of functions that must be computed numerically.

We present an analysis of the primary bifurcations that occur in a mathematical model that uses the (three-dimensional) Navier–Stokes equations in the Boussinesq approximation to describe the flows of a near unity Prandtl number fluid (i.e. air) in the differentially heated rotating annulus. In particular, we investigate the double Hopf (Hopf–Hopf) bifurcations that occur along the axisymmetric to non-axisymmetric flow transition. Parameter-dependent centre manifold reduction and normal forms are used to show that in certain regions in parameter space, stable quasiperiodic mixed-azimuthal mode solutions result as a nonlinear interaction of two bifurcating waves with different azimuthal wave numbers. These flows have been called wave dispersion and interference vacillation.