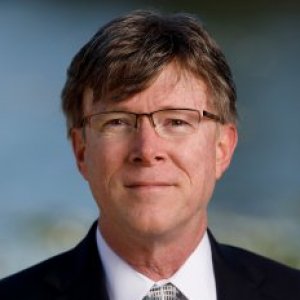 
Greg Tolley studies estuaries, including the ecology of oyster reefs and the impact of freshwater inflow on estuarine ecosystems. 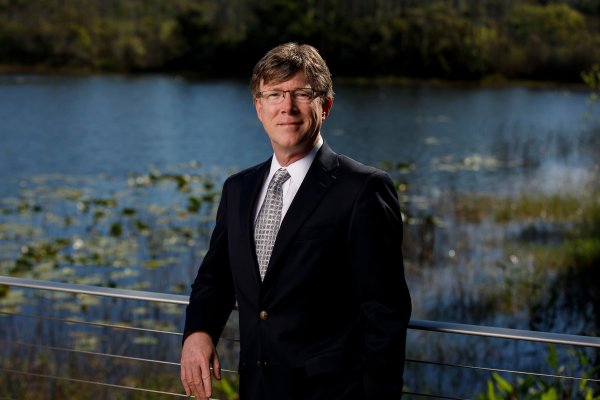 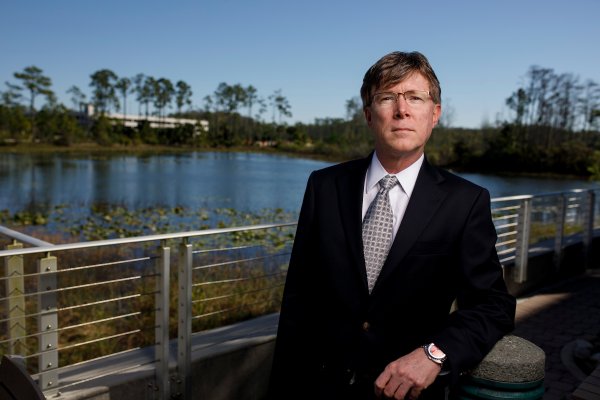 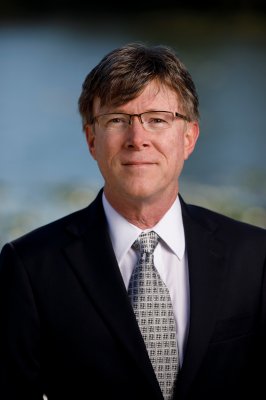 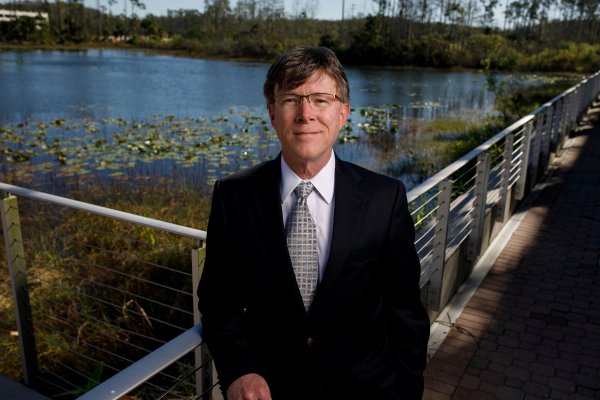 Greg Tolley is the executive director of The Water School and professor of marine science at Florida Gulf Coast University. He is the founding director of the Coastal Watershed Institute and the former director of graduate studies at FGCU.

Dr. Tolley's research focuses on how variation in freshwater to estuaries can impact the ecology of estuarine organisms. He is also exploring the value of oyster reefs as an essential fish habitat.

Dr. Tolley was instrumental in developing the marine science program and has worked diligently in Southwest Florida to increase capacity and focus university research on coastal environments and the conservation of aquatic resources and natural assets that are used and enjoyed by Florida residents and visitors alike.

Greg Tolley explains why artificial reefs are an efficient concept.

Greg Tolley discusses the budding partnership between The Water School at FGCU and Mote Marine Laboratory.

Greg Tolley discusses President Trump's visit to Lake Okeechobee and the need for repairs to the Herbert Hoover Dike.

Editorial: FGCU in position to lead on water quality research, state should allow it to

Greg Tolley makes the case for FGCU's ability to take the lead on water quality research.

Red tide levels up in Charlotte County, could be heading south

The News-Press Save Our Water Summit

Greg Tolley speaks at the News-Press Save Our Water Summit at the Hyatt Regency Coconout Point resort.

Oyster-reef restoration as a means of enhancing estuarine ecosystem function

Influence of freshwater inflow on estuarine ecosystems and aquatic resources

Tolley's current research interests focus on the influence of freshwater inflow on estuarine ecosystems and aquatic resources. This research addresses how variation in the timing, amount, and quality of freshwater delivered to estuaries influences the physiology of estuarine organisms, shapes community structure of oyster-reef and zooplankton assemblages, and impacts the potential value of oyster reefs as essential fish habitat.

Freshwater inflow and utilization of the estuarine tributaries of Estero Bay

2013 Oyster reefs provide structural habitat for resident crabs and fishes, most of which have planktonic larvae that are dependent upon transport/retention processes for successful settlement. High rates of freshwater inflow have the potential to disrupt these processes, creating spatial gaps between larval distribution and settlement habitat. To investigate whether inflow can impact subsequent recruitment to oyster reefs, densities of crab larvae and post-settlement juveniles and adults were compared in Estero Bay, Florida, over 22 months (2005–2006). Three species were selected for comparison: Petrolisthes armatus, Eurypanopeus depressus, and Rhithropanopeus harrisii. All are important members of oyster reef communities in Southwest Florida; all exhibit protracted spawning, with larvae present throughout the year; and each is distributed unevenly on reefs in different salinity regimes. Recruitment to oyster reefs was positively correlated with bay-wide larval supply at all five reefs examined. Species-specific larval connectivity to settlement sites was altered by inflow: where connectivity was enhanced by increased inflow, stock–recruitment curves were linear; where connectivity was reduced by high inflows, stock–recruitment curves were asymptotic at higher larval densities. Maximum recruit density varied by an order of magnitude among reefs. Although live oyster density was a good indicator of habitat quality in regard to crab density, it did not account for the high variability in recruit densities. Variation in recruit density at higher levels of larval supply may primarily be caused by inflow-induced variation in larval connectivity, creating an abiotic simulation of what has widely been regarded as density dependence in stock–recruitment curves.

2009 Hemolymph osmolality changes following exposure to abrupt salinity change in the range of 5–40 ppt (T=26∘C⁠, full air saturation) and upon exposure to air (T=23∘C,r.h. =30/ were investigated in the flatback mud crab Eurypanopeus depressus (Smith, 1869), a dominant species on oyster reefs in Southwest Florida. During salinity trials, hemolymph osmolality of E. depressus ranged from 751±123 mOsmol kg−1 at 5 ppt (214±32 mOsmol kg−1) to 1188±81 mOsmol kg−1 at 40 ppt (1188±29 mOsmol kg−1)⁠. In the salinity range of 5–15 ppt E. depressus exhibited a hyperosmotic pattern of osmoregulation while at 30 and 40 ppt it conformed. In all cases stable hemolymph osmotic concentration was reached in less than 24h⁠. During desiccation trials, hemolymph osmolality of E. depressus ranged from 971±121 mOsmol kg−1 for unexposed crabs to 1132±169 mOsmol kg−1 after 90min of exposure. The information obtained from this study adds to knowledge of crustacean stress physiology and may give a clearer picture of the important factors involved in population distribution and the consequences of multiple stressors that may affect the crabs or their oyster-reef habitat.

2003 The effects of extreme freshwater events on Perkinsus marinus–Crassostrea virginica interactions remain unexplored. The effects of freshwater events on P. marinus infection in C. virginica and oyster survival were therefore examined in controlled laboratory experiments and a field study. For the laboratory experiments, oysters were collected in spring, summer and winter from an area in Louisiana where P. marinus is endemic. Oysters were placed in 2 recirculating water systems at a salinity and temperature similar to their collection site. They were subjected to 2 salinity treatments (freshet and control). Freshet events were simulated by reducing the water to salinities of 0 to 1 ppt over a 48 h period, and maintained for a 21 d period. Control oysters were maintained at the initial salinity. Thirty oysters were sampled prior to the freshet event, and 30 oysters per treatment group (freshet, control) were sampled on Days 7, 14 and 21 after initiation of the freshet event. Oyster mortality, P. marinus infection intensities, oyster condition index and oyster plasma osmolality were measured in weekly samples. All 3 simulated freshet events (i.e. spring, summer, winter) resulted in a significant reduction in P. marinus infection intensity, but failed to eliminate infection. The failure of the oyster plasma to reach very low osmolality (

A broader view of ecosystem services related to oyster restoration

2007 The importance of restoring filter-feeders, such as the Eastern oyster Crassostrea virginica, to mitigate the effects of eutrophication (e.g. in Chesapeake Bay) is currently under debate. The argument that bivalve molluscs alone cannot control phytoplankton blooms and reduce hypoxia oversimplifies a more complex issue, namely that ecosystem engineering species make manifold contributions to ecosystem services. Although further discussion and research leading to a more complete understanding is required, oysters and other molluscs (e.g. mussels) in estuarine ecosystems provide services far beyond the mere top-down control of phytoplankton blooms, such as (1) seston filtration, (2) benthic–pelagic coupling, (3) creation of refugia from predation, (4) creation of feeding habitat for juveniles and adults of mobile species, and for sessile stages of species that attach to molluscan shells, and (5) provision of nesting habitat.