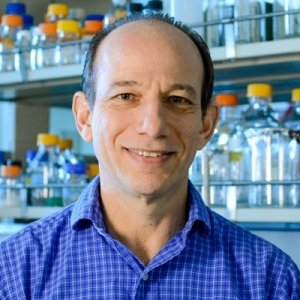 Chair of the Department of Chemistry and Biochemistry | Florida Atlantic University


Gregg Fields uses chemistry to answer biological questions, many of which assist in the diagnosis and treatment of major diseases. 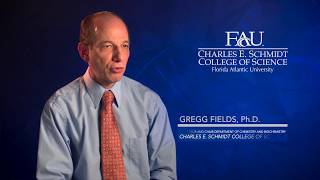 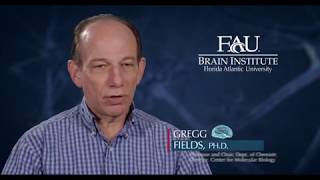 Gregg Fields applies chemistry in novel ways to answer important biological questions, many of which assist in the diagnosis and treatment of major diseases, such as multiple sclerosis, arthritis and cancer.

Fields is a fellow of the National Academy of Inventors and a fellow of the American Association for the Advancement of Science. He is a renowned researcher who holds six U.S. patents and has one application being reviewed. The technology developed by Fields has resulted in three commercial products, currently sold by five different companies. He has authored or coauthored more than 260 scientific publications and has presented more than 190 invited lectures.

Elected Fellow, American Association for the Advancement of Science (AAAS)

Gregg Fields, the chair for FAU’s Department of Chemistry and Biochemistry and the director of the Center of Molecular Biology and Biotechnology, has just been named a National Academy of Inventors Fellow. The NAI Fellows program has “414 Fellows worldwide representing more than 150 prestigious universities and governmental and non-profit research institutions,” as stated on their website. All of these inventors have patents – at least one is required for nomination – with the United States Patent and Trademark Office, and together the 414 Fellows amass nearly 14,000 patents. Fields will be joining the likes of Jay S. Walker, founder of Priceline and Curtis Carlson, president and CEO of SRI International.

Goal is to identify extracellular matrix peptides that can be used as predictors. A blood test to diagnose which heart attack survivors will suffer heart failure is the goal of a new five-year, $11.6 million contract to the UT Health Science Center San Antonio (UTSA) from the National Heart, Lung, and Blood Institute (NHLBI).

2015 Matrix metalloproteinases (MMPs) have been implicated in numerous pathologies. An overall lack of selectivity has rendered active‐site‐targeted MMP inhibitors problematic. The present study describes MMP inhibitors that function by binding both secondary binding sites (exosites) and the active site. Heterotrimeric triple‐helical peptide transition‐state analogue inhibitors (THPIs) were assembled utilizing click chemistry. Three different heterotrimers were constructed, allowing for the inhibitory phosphinate moiety to be present uniquely in the leading, middle, or trailing strand of the triple helix. All heterotrimeric constructs had sufficient thermally stability to warrant analysis as inhibitors. The heterotrimeric THPIs were effective against MMP‐13 and MT1‐MMP, with Ki values spanning 100–400 nM. Unlike homotrimeric THPIs, the heterotrimeric THPIs offered complete selectivity between MT1‐MMP and MMP‐1. Exosite‐based approaches such as this provide inhibitors with desired MMP selectivities.

2014 A common liability of cancer drugs is toxicity to noncancerous cells. Thus, molecules are needed that are potent toward cancer cells while sparing healthy cells. The cost of traditional cell-based HTS is dictated by the library size, which is typically in the hundreds of thousands of individual compounds. Mixture-based combinatorial libraries offer a cost-effective alternative to single-compound libraries while eliminating the need for molecular target validation. Presently, lung cancer and melanoma cells were screened in parallel with healthy cells using a mixture-based library. A novel class of compounds was discovered that selectively inhibited melanoma cell growth via apoptosis with submicromolar potency while sparing healthy cells. Additionally, the cost of screening and biological follow-up experiments was significantly lower than in typical HTS. Our findings suggest that mixture-based phenotypic HTS can significantly reduce cost and hit-to-lead time while yielding novel compounds with promising pharmacology.

2011 The proteolysis of collagen triple-helical structure (collagenolysis) is a poorly understood yet critical physiological process. Presently, matrix metalloproteinase 1 (MMP-1) and collagen triple-helical peptide models have been utilized to characterize the events and calculate the energetics of collagenolysis via NMR spectroscopic analysis of 12 enzyme–substrate complexes. The triple-helix is bound initially by the MMP-1 hemopexin-like (HPX) domain via a four amino acid stretch (analogous to type I collagen residues 782–785). The triple-helix is then presented to the MMP-1 catalytic (CAT) domain in a distinct orientation. The HPX and CAT domains are rotated with respect to one another compared with the X-ray “closed” conformation of MMP-1. Back-rotation of the CAT and HPX domains to the X-ray closed conformation releases one chain out of the triple-helix, and this chain is properly positioned in the CAT domain active site for subsequent hydrolysis. The aforementioned steps provide a detailed, experimentally derived, and energetically favorable collagenolytic mechanism, as well as significant insight into the roles of distinct domains in extracellular protease function.