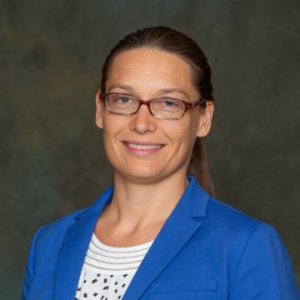 
Dr. Hoffmann’s research program is focused on how light changes your well being, motivation, fertility and pregnancy success. 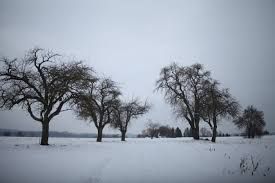 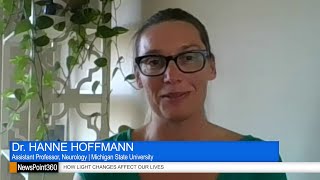 Dr. Hoffmann’s research program is focused on understanding the molecular pathways and brain circuitry regulating function of the hypothalamus and the suprachiasmatic nucleus (SCN), the major pacemaker of the body, and how their impaired function affects hormone release, behavior and reproductive competence. Uncoordinated hormone release, as seen in shift workers and people sitting in front of bright screens late into the night, is a growing health concern and affects more than 20% of the US population. Not only do impaired circadian rhythms increase the risk of endocrine disorders such as diabetes, obesity, and cardiovascular disease, but they also affect mental health and lead to infertility and preterm labor. To further our understanding of the importance of circadian rhythms in endocrine-related disorders, Dr. Hoffmann has developed novel mouse models allowing her to understand the central and peripheral control reproductive function.

The major goal of Dr. Hoffmann’s research is to understand how abnormal SCN function leads to desynchronization of hormone release and how this relates to cellular function, for example through receptor expression and localization. Her long-term goal is to identify novel drug targets for the treatment of arrhythmia, infertility and preterm labor.

Impact of Light on Physiology

Will Seasonal Affective Disorder Be Worse This Year Because of COVID-19? Here's What Experts Say

SAD is a type of depression, Hanne Hoffmann, assistant professor at Michigan State University, tells Health. People with SAD tend to experience common depression symptoms: feeling depressed most days, losing interest in activities they once enjoyed, experiencing changes in appetite or weight, having problems with sleep, having low energy, and feeling hopeless or worthless. But SAD only affects people for four or five months of the year—typically, the winter months, when the days become shorter. "Light promotes the secretion of hormones and neurotransmitters in the brain, specifically serotonin, which stabilizes your mood, feelings of well-being, and happiness," says Hoffman. "Because there's less daylight and the light isn't as intense in the winter, we don't produce as much serotonin—and that can lead to depression." (It is possible to experience SAD in the spring and summer months, but that's much less common.)

"The problem is that humans did not evolve in the Arctic," Hanne Hoffman, an animal scientist from Michigan State University who focuses on circadian rhythm, told Gizmodo.

Then there’s the health component. “The problem is that humans did not evolve in the Arctic,” Hanne Hoffman, assistant professor in animal science who studies the circadian rhythm, told Gizmodo. “Our bodies have adapted to this 24-hour cycle generated by the rotation of the Earth. We can’t really go against evolution, and that’s what is happening in those locations. You’re going against what we’re programmed to do.” Typically, folks in the Arctic compensate by shutting out the light in their homes during what would otherwise be nighttime hours.

“[H]umans did not evolve in the Arctic,” Hanne Hoffman, assistant professor of animal science at Michigan State University, tells Gizmodo’s Dvorsky. “Our bodies have adapted to this 24-hour cycle generated by the rotation of the Earth. We can’t really go against evolution, and that’s what is happening in those locations. You’re going against what we’re programmed to do.”

Blood test may flag women at risk for premature birth

A blood test during a routine prenatal visit could identify women at risk for premature birth, a new study shows. In the United States, one in 10 babies is born prematurely. “Preterm births are common,” said Hanne Hoffmann, an assistant professor in the animal science department at Michigan State University. “If we know the mother is at risk for a preterm birth, her doctor can monitor her more closely.”

2018 Gonadotropin-releasing hormone (GnRH) is required for pubertal onset and reproduction, thus the control of GnRH transcription is tightly regulated during development and adulthood. GnRH neuron development depends on transcription factors of the homeodomain family. For example, Ventral anterior homeobox 1 (Vax1) is necessary to maintain GnRH expression after embryonic day 13 in the mouse. To further our understanding of the mechanisms by which VAX1 regulates GnRH gene expression, we asked whether VAX1 interacts with other transcription factors to modify GnRH expression levels. Using the GnRH cell lines, GN11 and GT1-7, we found that activation of PKC enhances expression of the immediate early gene cFos in both GN11, and GT1-7, and represses expression of Vax1 in GT1-7. Further, VAX1 interacts with cFOS while bound to the GnRH promoter. In immature GN11 cells, VAX1 and cFOS enhance GnRH expression, whereas VAX1 and cFOS have a repressive role in the mature GT1-7 cells.

2016 Hypothalamic gonadotropin-releasing hormone (GnRH) neurons are at the apex of the hypothalamic-pituitary-gonadal axis that regulates mammalian fertility. Herein we demonstrate a critical role for the homeodomain transcription factor ventral anterior homeobox 1 (VAX1) in GnRH neuron maturation and show that Vax1 deletion from GnRH neurons leads to complete infertility in males and females. Specifically, global Vax1 knock-out embryos had normal numbers of GnRH neurons at 13 d of gestation, but no GnRH staining was detected by embryonic day 17. To identify the role of VAX1 specifically in GnRH neuron development, Vax1flox mice were generated and lineage tracing performed in Vax1flox/flox:GnRHcre:RosaLacZ mice. This identified VAX1 as essential for maintaining expression of Gnrh1. The absence of GnRH staining in adult Vax1flox/flox:GnRHcre mice led to delayed puberty, hypogonadism, and infertility. To address the mechanism by which VAX1 maintains Gnrh1 transcription, the capacity of VAX1 to regulate Gnrh1 transcription was evaluated in the GnRH cell lines GN11 and GT1-7. As determined by luciferase and electrophoretic mobility shift assays, we found VAX1 to be a direct activator of the GnRH promoter through binding to four ATTA sites in the GnRH enhancer (E1) and proximal promoter (P), and able to compete with the homeoprotein SIX6 for occupation of the identified ATTA sites in the GnRH promoter. We conclude that VAX1 is expressed in GnRH neurons where it is required for GnRH neuron expression of GnRH and maintenance of fertility in mice.

2011 Previously, using artificial cell systems, we identified receptor heteromers between the dopamine D1 or D2 receptors and histamine H3 receptor. In addition we demonstrated two biochemical characteristics of the dopamine D1 receptor-histamine H3 receptor heteromer. We have now extended this work to show the dopamine D1 receptor-histamine H3 receptor heteromer exists in the brain and serves to provide a novel link between the Mitogen Activated Protein Kinase (MAPK) pathway and the GABAergic neurons in the direct striatal efferent pathway. Using the biochemical characteristics identified previously we found that the ability of H3 receptor activation to stimulate p44 and p42 extracellular signal-regulated MAP Kinase (ERK 1/2) phosphorylation was only observed in striatal slices of mice expressing D1 receptors but not in D1-receptor-deficient mice. On the other hand, the ability of both D1 and H3 receptor antagonists to block MAPK activation induced by either D1 or H3 receptor agonists was also found in striatal slices. Taken together these data indicate the occurrence of D1-H3 receptor complexes in the striatum and, more importantly, that H3 receptor agonist-induced ERK 1/2 phosphorylation in striatal slices is mediated by D1-H3 receptor heteromers. Moreover, H3 receptor-mediated phospho-ERK 1/2 labeling co-distributed with D1-receptor-containing but not with D2-receptor-containing striatal neurons. These results indicate that D1-H3 receptor heteromers work as processors integrating dopamine- and histamine-related signals involved in controlling the function of striatal neurons of the direct striatal pathway.

2014 The general effects of cocaine are not well understood at the molecular level. What is known is that the dopamine D1 receptor plays an important role. Here we show that a key mechanism may be cocaine's blockade of the histamine H3 receptor-mediated inhibition of D1 receptor function. This blockade requires the σ1 receptor and occurs upon cocaine binding to σ1-D1-H3 receptor complexes. The cocaine-mediated disruption leaves an uninhibited D1 receptor that activates Gs, freely recruits β-arrestin, increases p-ERK 1/2 levels, and induces cell death when over activated. Using in vitro assays with transfected cells and in ex vivo experiments using both rats acutely treated or self-administered with cocaine along with mice depleted of σ1 receptor, we show that blockade of σ1 receptor by an antagonist restores the protective H3 receptor-mediated brake on D1 receptor signaling and prevents the cell death from elevated D1 receptor signaling. These findings suggest that a combination therapy of σ1R antagonists with H3 receptor agonists could serve to reduce some effects of cocaine.

2010 G protein-coupled receptor (GPCR) heteromers are macromolecular complexes with unique functional properties different from those of its individual protomers. Little is known about what determines the quaternary structure of GPCR heteromers resulting in their unique functional properties. In this study, using resonance energy transfer techniques in experiments with mutated receptors, we provide for the first time clear evidence for a key role of intracellular domains in the determination of the quaternary structure of GPCR heteromers between adenosine A2A, cannabinoid CB1, and dopamine D2 receptors. In these interactions, arginine-rich epitopes form salt bridges with phosphorylated serine or threonine residues from CK1/2 consensus sites. Each receptor (A2A, CB1, and D2) was found to include two evolutionarily conserved intracellular domains to establish selective electrostatic interactions with intracellular domains of the other two receptors, indicating that these particular electrostatic interactions constitute a general mechanism for receptor heteromerization. Mutation experiments indicated that the interactions of the intracellular domains of the CB1 receptor with A2A and D2 receptors are fundamental for the correct formation of the quaternary structure needed for the function (MAPK signaling) of the A2A-CB1-D2 receptor heteromers. Analysis of MAPK signaling in striatal slices of CB1 receptor KO mice and wild-type littermates supported the existence of A1-CB1-D2 receptor heteromer in the brain. These findings allowed us to propose the first molecular model of the quaternary structure of a receptor heteromultimer.