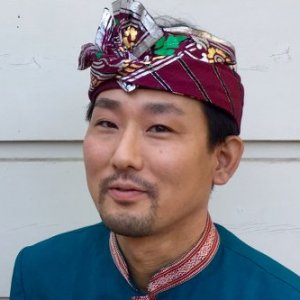 Hirotaka Inuzuka is a performing artist and educator. Hiro began studying Balinese gamelan during his undergraduate studies in Ethnomusicology at UCLA. He continued to study Indonesian music and dance at California Institute of the Arts under the mentorship of I Nyoman Wenten, where he earned his Masters of Fine Arts in World Music Performance. He frequently travels to Bali to expand his expertise and study with Bali's most renowned artists and teachers.

He is a prominent member of several gamelan groups in the greater Los Angeles area including Burat Wangi, Giri Kusuma, and Bhuwana Kumala. He has performed in the United States, Japan, and Bali, participating in events such as Pesta Kesenian Bali (Bali Arts Festival), Bali Mandara Mahalango, World Festival of Sacred Music, and Performing Indonesia at the Smithsonian Institute.

Hiro has been serving as Ensemble Coach for Gamelan Kembang Atangi at Loyola Marymount University since 2018. In addition, he has been Teaching Artist with the Center For World Music since 2015, and an instructor of Indonesian music at the California State Summer School for the Arts (CSSSA). He is also an artistic director for Gamelan Gunung Mas at University of San Diego since 2019.

Mr. Inuzuka founded two of his own ensembles in 2014: Gamelan Gambuh Burat Wangi, a Balinese ensemble dedicated to the music of the Gambuh dance drama, a rare and ancient repertoire that is Bali’s oldest surviving dance form, and Gamelan Merdu Kumala, a community ensemble in Tujunga, California. Hiro directs these groups, which performed in festivals and concerts including LA Philharmonic’s 100th anniversary celebration, World Rhythms at Descanso Gardens, Lou Harrison’s centennial celebration, and CalArts World Music and Dance Festival. Gamelan Merdu Kumala recently conducted a live score for the silent film, “The Adventures of Prince Achmed” by Lotte Reiniger presented by Metro Presents at Union Station.