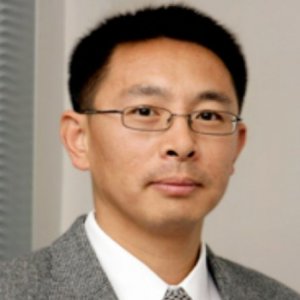 
Research focuses on disease prevention and causes of Parkinson's disease.

Honglei Chen is a professor in the Department of Epidemiology and Biostatistics at Michigan State University.

His research focuses on neurodegenerative diseases, especially Parkinson's disease. He works on several large prospective cohorts to determine the environmental and genetic causes of Parkinson's disease and characterize high-risk populations through research on initial symptoms and biomarkers.

The ultimate goal of his work is disease prevention and more effective clinical management.

A Senior Investigator is a NIH employee who has been granted tenure by the Deputy Director for Intramural Research (DDIR), after review and recommendation by the NIH Central Tenure Committee (CTC) or the Senior Biomedical Research Service (SBRS) Policy Board. Tenure at the NIH is the commitment by an Institute or Center (IC) of independent resources to an independent Senior Investigator, including salary, operating budget, personnel, and space.

Could the Air You Breathe Be a Factor in Parkinson’s?

"Could the air you breathe, specifically through your nose, be a factor in the development of Parkinson’s disease? That’s a question a Michigan State University researcher is looking to answer in a new federally funded study. Honglei Chen, an epidemiologist who has spent years researching Parkinson’s and the role sense of smell plays in disease development, has received a $1.5 million grant from the Department of Defense, or DoD..."

A new study provides further evidence that a simple scratch-and-sniff test could predict Parkinson’s disease even earlier than previously thought.

A new Michigan State University study suggests that older adults with poor sense of smell may see an almost 50% increase in their risk of dying within 10 years – surprisingly in healthier individuals. The research is published in the journal Annals of Internal Medicine. “Poor sense of smell becomes more common as people age, and there’s a link to a higher risk for death,” said Honglei Chen, an epidemiologist who’s focused his research on this sensory deficit in older adults. “Our study is the first to look at the potential reasons why it predicts a higher mortality.” Using data from the National Institute on Aging’s Health ABC study, Chen and his research team reviewed information from almost 2,300 participants between 71 and 82 years old over a 13-year period. Participants included men and women, black and white, who completed a smell test of 12 common odors. Researchers then classified participants as having good, moderate or poor sense of smell. Compared with older adults with a good sense of smell, those with poor smell were at a 46% higher risk for death at 10 years and 30% at 13 years. Results were minimally affected by sex, race or other demographic and lifestyle factors. However, the surprising revelation was that the healthier participants at the start of the study were found to be largely responsible for the higher risk. Poor sense of smell is known as an early sign for Parkinson’s disease and dementia and is associated with weight loss. However, these conditions only explained 28% of the increased risk, leaving most of it unexplained. “We don’t have a reason for more than 70% of the increased risk. We need to find out what happened to these individuals,” said Chen, who plans to pursue the mystery in future studies. He added that poor sense of smell may be an early and sensitive sign for deteriorating health before it’s even recognized in the doctor’s office. “It tells us that in older adults, impaired sense of smell has broader implications of health beyond what we have already known,” Chen said. “Incorporating a sense of smell screening in routine doctor visits might be a good idea at some point.” So, what should people do if they think they’re having trouble smelling? Talk to a doctor. “It’s always prudent to talk to a physician about your health concerns,” he said. Professor Chen joined MSU in late 2016 as part of the Global Impact Initiative.

A Michigan State University researcher is hoping to make a connection between pesticides, olfactory impairment and early symptoms of neurodegenerative diseases among aging farmers. Honglei Chen, a professor of epidemiology whose research focuses on neurodegenerative diseases, will use a five-year, $5 million grant from the National Institutes for Health to investigate the role pesticides might play in olfactory impairment and their relevance to diseases such as Alzheimer’s and Parkinson’s. “Our battle against Alzheimer’s and Parkinson’s may depend on early disease identification and intervention, and poor olfaction has been identified as an early warning for these diseases,” Chen said. “This grant will allow us to connect the dots by identifying factors that contribute to poor olfaction among older adults and evaluating how this sensory deficit may progress to early stages of neurodegenerative diseases.” In preliminary analyses, researchers found a correlation between high pesticide exposure and self-reported poor sense of smell. In this project, researchers will objectively assess the olfaction of around 2,200 farmers using a standard smell test. Using a scratch-and-sniff method, participants will need to correctly identify 12 common smells such as smoke, lemon, cinnamon or gasoline. Researchers will then conduct home visits of approximately 450 farmers to assess cognitive function and motor symptoms. “We are trying to put everything into context with the ultimate goal of understanding the early stages of neurodegenerative diseases and factors involved,” said Chen, who is part of MSU’s Global Impact Initiative. “This project focuses on pesticides because earlier studies show their potential connections to neurodegenerative diseases. Now we want to define what role they play.” The study is being conducted using resources from the Agricultural Health Study and in partnership with researchers from Duke University, University of Chicago, Penn State University and NIH investigators of the Agricultural Health Study.

The Study of Health Aging and Neurodegenerative Diseases

Dr. Chen's primary research interests include: Environment and genetic risk factors for Parkinson's disease: Genes and environmental factors, alone or in combination, contribute to the pathogenesis of Parkinson's disease. Over the past decade, Dr. Chen’s research has advanced understanding of environmental contributions to Parkinson's disease. He and collaborators published findings on a wide range of environmental factors in relation to Parkinson’s, ranging from cigarette smoking, coffee drinking, exercise, ibuprofen use, and plasma biomarkers to pesticides and air pollution. His research also contributes to a better understanding of genetic factors and gene-environmental interactions in the etiology of Parkinson’s disease. • Prodromal neurodegeneration: Parkinson’s disease takes decades to develop and, by the time of diagnosis, is generally too far gone to intervene. It has become clear that a variety of nonspecific symptoms (e.g., olfactory impairment and REM sleep behavior disorder) may develop years, if not decades, prior to Parkinson’s clinical diagnosis. Dr. Chen analyzes these prodromal symptoms with two important goals: first, to characterize at-risk populations and second, to identify factors that either initiate or perpetuate disease prodromal pathogenesis. As these symptoms also develop in the prodromal stage of dementia, Dr. Chen’s research will have broad implications in understanding neurodegeneration beyond Parkinson’s disease.

Prodromal symptoms in the Sister Study

Airborne pollutants as triggers of Parkinson's disease via the olfactory system

To define the role of ambient air pollutants in olfactory impairment among older adults in order to understand early stages of PD development, using data from the Sister Study.

Pesticides, Olfaction, and Neurodegeneration Among US Farmers

To investigate roles of pesticides in olfactory impairment among farmers and their relevance to prodromal development of major neurodegenerative diseases.

Determinants of depression in Parkinson’s disease

To investigate the role of depression in Parkinson’s disease using data from the Swedish patient registry.